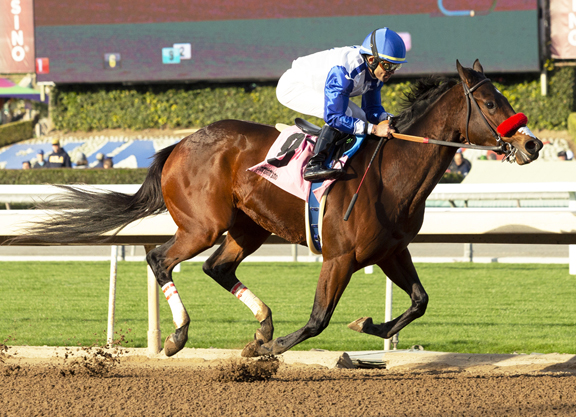 Having more than proven her aptitude going short with a devastating maiden-breaking victory over 6 1/2 furlongs last time out, Venetian Harbor (Munnings) stretches out to two turns for Saturday’s GII Las Virgenes S. at Santa Anita. While the trip remains a bit of a question mark, the bay is strictly the one they’ll all have to beat.

The subject of considerable pre-debut chatter, Venetian Harbor was duly sent off at even-money for a five-furlong turf dash at Del Mar Nov. 15. She sent the chalk players home slightly disappointed that afternoon, but she hardly disgraced herself, box-seating the race after leading early, then finishing willingly to be second while unable to catch loose-on-the-lead Aqua Seaform Shame (Kantharos) with four next-out winners behind her. The tote read ‘1’ again when she tried dirt for the first time at Santa Anita Dec. 29 and she made light work of it, streaking home by 10 3/4 lengths in 1:15.60. The 94 Beyer was the second-fastest for a 2-year-old filly in 2019.

Venetian Harbor’s immediate family is decidedly sprint oriented–her fourth dam is champion Safely Kept (Horatius)–but if able to relax up front on the stretchout, she should be able to lead her four rivals and see out the trip. Munnings’s I’m A Chatterbox–out of a Lost Soldier mare–won the GI Delaware H. over 10 furlongs.

Stellar Sound (Tapit) was typically well-bet for a Baffert firster and validated 3-2 second favoritism when graduating by a half-length at Del Mar Aug. 18, but she could do no better than fifth to stablemate Bast (Uncle Mo) after fighting out the early pace in the GI Del Mar Debutante 13 days later. A decent third to Leucothea (Midshipman) in the Desi Arnaz S. at Del Mar Nov. 10, she is bred to appreciate this trip and beyond and could be a fly in the favorite’s ointment.

The Baffert-conditioned Gingham (Quality Road) has never raced at less than a mile, having won her maiden and first-level allowance over a dull Santa Anita main track either side of a fourth to Bast in the GI Starlet S. at Los Alamitos in December.