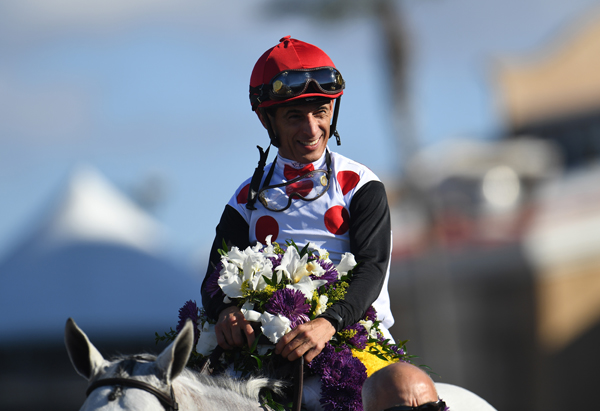 OZONE PARK, N.Y.–With a Hall of Fame plaque, two Eclipse awards, 15 Breeders’ Cup victories and four Triple Crown race wins to his credit, John Velazquez is one of the most accomplished riders in the sport. The 47-year-old rider is on the verge of his latest milestone as he is just one win away from 6,000 North American victories, a feat previously accomplished by just 15 riders. The TDN’s Christie DeBernardis and Joe Bianca caught up with Velazquez as the New York racing community anxiously awaits win 6,000. The Puerto Rican rider has four mounts on Friday’s card at Aqueduct and five more chances on Saturday’s GI Cigar Mile card.

TDN: How does it feel to be on the verge of 6,000 North American victories?

JV: “Well, it’s a number. It’s an important number, but I just concentrate on winning races basically and the numbers come after. So, it’s not something I shoot for or live for. I think I concentrate more on winning races and the rest is history. One day when I’m retired, I’ll look back and I’ll say, ‘I think I accomplished something.’ But, for now I’m here, I’m very active, I’m looking forward to winning more races and now they are just a number.”

TDN: You’ve won a lot of important races throughout your career. Tell us about some of the highlights.

JV: “I’ve had a lot of winners and a lot of important races. The [GI Kentucky] Derby is obviously one of the most recognized races in the world and obviously with the career that I have so far, thankfully I have two winners in the Derby, two Belmonts and plenty of Breeders’ Cups, which are the races that people remember the most. I’ve always said I’m very blessed for the opportunities that I’ve been given and very humble.

TDN: Are there any races left on your bucket list that you have yet to win?

TDN: Can you name some of your best or favorite mounts over the years?

JV: “Wise Dan was one of my favorites. He was two-time Horse of the Year and he was probably the best horse I have ridden in my career. There are many. Winning the Belmont with Rags to Riches is one of my favorite races that I’ll always remember. It was my first Classic from the Triple Crown and I did it with Todd Pletcher. Winning the Kentucky Derby, first with Graham Motion, who is a very good friend of mine, with Animal Kingdom. Those are the races that you remember the most and the connections that you all have, especially with my career with friends and families that I grew up with. It’s just great, just very fortunate and very blessed to have these opportunities.”

TDN: Tell us about some of the people involved in helping you get those victories, such as Todd Pletcher, who you’ve worked with for a long time.

JV: “Well, I’m very fortunate and very blessed with all the people that I work with and to still be working with a lot of the same people for the last 20-something years. I ride a lot of good horses and that’s what keeps you coming back again, keeps you kind of hooked to the racing and the excitement, trying to find the next good horse or something that’s going to bring you more excitement. Working with Todd Pletcher for that many years and winning that many races with him, it’s very unusual for a jockey and trainer to be together for that many years. I think we’ve been together at least 20 years. That’s incredible, you know, for the business that we are in doesn’t last that long.”

TDN: Can you describe your relationship with Angel Cordero over the years?

JV: “It has been a long relationship. He was the one who brought me here from Puerto Rico and I lived with him when I came here for about three months. It’s always been a kind of father and son relationship. We have our moments, obviously like a father and son. We have our arguments, but it’s very healthy arguments and we’re still together. I’m very proud of the things we have done together ever since I came in from Puerto Rico. It’s very unique.

TDN: As you get older, what steps do you take to stay at the top of the game?

JV: “As I get older, I think that I don’t need to prove anything, so it’s not just about proving yourself or about the money, it’s about staying on top of a certain level and getting the mounts that you really like to get, if you will. And if you still get them, that’s the opportunities that keep you excited about the game. You stick around if you’re healthy. First of all, for me, it’s being healthy, being 100% where I can do the best job that I can do.

TDN: How have you grown as a jockey since you first came to America? Back then, did you ever see yourself getting to the point in your career that you are at now?

JV: “Absolutely not. When I first came in as a young rider, I didn’t know anything about the racetrack, I just went to a jockey school in Puerto Rico, I loved horses, that’s all I cared about. I just wanted to ride horses. I didn’t know where it was going to take me. I was hoping that I’d do well enough to help my family. That was one of my main things when I came in. I came from nothing and wanted to make sure that I did well and could help my family back in Puerto Rico. I just started building up, learning about the business and how competitive it is and it started growing on me. It was like, ‘Oh, man, I can do this.’ And the more you win, the more you learn, then the more passionate you get about your job and what you do. In anything you do you just have to try to put your best at it and see where you can fit.”

TDN: Do you see yourself as a mentor to some of the younger riders, especially those from your native Puerto Rico?

JV: “Every kid who comes in, I try to help them the best I can. The better rider they become, the better it is for us. It’s safety first, and, second of all, you can ride better with the younger riders once they understand the dangers of the game. So, if you can concentrate on something, try to teach them the best you can and hopefully they listen and they follow up, that will be good for them. There were many riders when I came in, obviously I lived with Angel [Cordero] and he was my main mentor when I came here, but I mean there was Mike Smith and Jose Santos and other guys that really helped me out, so it’s just a little bit giving back.”