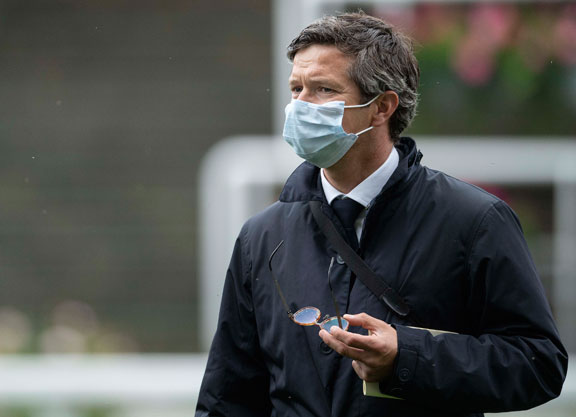 Trainer Roger Varian has one colt and a trio of fillies pointing to the G1 Cazoo Derby and G1 Cazoo Oaks on June 5 and 4, respectively. However, Varian, who has only had a single Derby starter previously when second with Kingston Hill (GB) (Mastercraftsman {Ire}) in 2014, is very aware of the unique challenge the Epsom Downs offers to young 3-year-olds.

“I think it's a fascinating Derby,” said Varian, who recently saddled his 1,000th winner. “It looks an open Derby and a very good Derby. There are a lot of different types of horses and for a racing fan it looks fascinating. We are delighted to be involved in it and are concentrating just on our guy.

“The Derby and Oaks are unique. The Epsom test is unique in the whole racing industry globally. We need to get through the next eight or nine days with our contenders without mishap and are very much looking forward to it.”

Sheikh Mohammed Obaid Al Maktoum's Third Realm (GB) (Sea The Stars {Ire}) has been pleasing Varian in his development ahead of the Blue Riband. Fifth at first asking at Kempton in November, the bay has not tasted defeat since. He found the Nottingham turf to his liking in a 10-furlong maiden race  on Apr. 17, and also captured the Listed Novibet Derby Trial S. as a 14-1 outsider at Lingfield in soft going on May 8.

“I really liked how he had trained between Nottingham and Lingfield and thought he'd run a nice race, so I was obviously delighted with the way it panned out and the ability he showed,” said Varian.

“Although there was a tail wind that day in the straight, it was hard work for the horses in front so I thought David [Egan] gave him clever ride by giving him some cover and shelter from the wind early on. What I was really impressed with was not the winning margin or that he was in front two out and had to hold on–it was the ease by which he got into contention. I love when I watch races the visual impression you get and he looked the best horse in the race.

“I think he has the right attitude for the Derby or for any big race. He seems to conserve energy and is not a flashy worker at home, he just does what you ask him to. His recovery from Lingfield was very quick. You don't want to waste energy in the paddock, on the way to the start, behind the gates or in the first two furlongs. He has got the right mind for the job, we've still got to learn if he's got the engine to bring home The Derby.

“He's not a big horse, you'd call him medium at best, but is very well-balanced and has got gate speed. I'm quite confident he is going to get the trip.

Third Realm will be ridden by Andrea Atzeni in the Derby. The pair worked on Wednesday.

Varian added, “He ticks a lot of the boxes that you want going into the race and he gave Andrea a nice feel yesterday in his last serious piece of work going into the race. We are very much looking forward to the day. He has a great mind, a relaxed character and bit of a cool dude, so whatever Epsom throws at him on the day I would be hopeful he can pass that test.

“We are obviously delighted with how he has progressed. We will have to see how many runners there are at Epsom and where we are drawn and what the ground is, but I think he is the kind of horse Andrea can put anywhere and that is comforting coming into a race like The Derby.”

Ali Saeed's Teona (Ire) (Sea The Stars {Ire}), third last out in the May 12 G3 Tattersalls Musidora S., is one of three G1 Cazoo Oaks prospects for Varian. Second over the all-weather at Newcastle on Oct. 30, she graduated in her second start there stepping up to 10 furlongs on Nov. 19. The Musidora was her 3-year-old bow.

He said, “She is a big, strong, energetic filly and had a lot of fizz on the day at York [in the Musidora]. She got a little upset at the starting gates. She over-raced a little bit off a very steady gallop. She made a nice move in the straight and then probably got tired in the final 100 yards. There were a lot of positives to take from the race, the biggest being able to give her a day out.

Winless in one start at two, Save A Forest (Ire) (Kingman {GB}) progressed to a maiden win two starts later at Wolverhampton over 9 1/2 furlongs on Mar. 27. She doubled down with a handicap win at Windsor on Apr. 19 and was an encouraging second in the Listed Novibet Oaks Trial Fillies' S. at Lingfield on May 8.

“She has taken a giant step forward after each start of her career and I would anticipate another good step forward from Lingfield,” Varian continued. “Even if you look at her Windsor handicap win, I think the second has since won by six or seven lengths so the form looks quite solid.

“She is an interesting filly–she is very laidback at home and doesn't give us any clues or anything away in her homework. But I love any animals, fillies or colts, who take a step forward with each run. The exciting thing about her is that you don't know when she will reach her ceiling. However she runs in the Oaks, I can almost guarantee it will be a good deal better than at Lingfield as that is the pattern of her progress.”

Rounding out Varian's trio is Shadwell's four-for-three listed winner Zeyaadah (Ire) (Tamayuz {GB}).The homebred rattled off a trio of wins-over the Chelmsford all-weather in August, a Sept. 16 novice at Beverley and she capped her juvenile season with a victory in the Listed Montrose Fillies' S. in heavy going at Newmarket on Halloween. In her season opener at Chester, she was only a length off the winner in second in the Listed Cheshire Oaks on May 5.

Despite Zeyaadah's loss, Varian was unperturbed and said, “I was delighted with her at Chester–the visual impression was very good. I know that Jim [Crowley] got a mighty feel from her as he was buzzing when he got off and we think it was a very good run in defeat.

“I hope she will stay, although she is not guaranteed to on pedigree, being by Tamayuz but middle-distance lines in her family should give her a chance, Her running style also gives her a chance.

“She has a relaxed style of running, is a good-moving filly, well-balanced and can quicken so I would hopeful over a trip. I thought if I had had another 10 days she would have been spot on for Chester but I ran her because of the timeframe and led me to think it was a very good run at Chester. I think there is good deal of improvement there.”