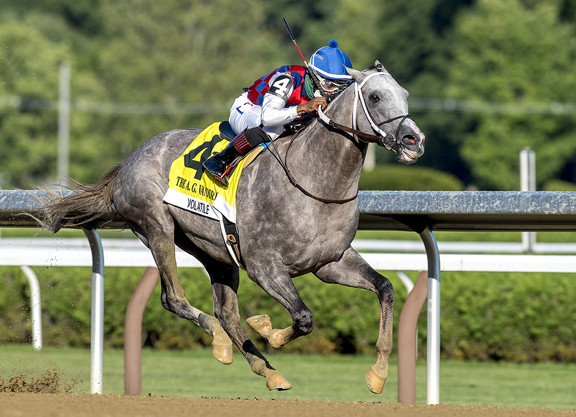 Saratoga's GI Alfred G. Vanderbilt H. winner Volatile (Violence-Melody Lady, by Unbridled's Song) has been injured with a hairline fracture of his right front cannon bone and has been retired. He will stand the 2021 season at Three Chimneys in Central Kentucky.

While competing for the partnership of Three Chimneys Farm and Phoenix Thoroughbreds, Volatile was undefeated in three starts in 2020. In addition to his Vanderbilt win July 25, in which he clocked a final quarter in :22.94, the fastest in the race's history, the gray also captured Churchill's Aristides S. by eight lengths in June and an allowance/optional claimer by 7 1/2 lengths in April at Oaklawn. The Steve Asmussen trainee retires with a record of 6-5-1-0 and earnings of $341,040. He got a Beyer Speed Figure of 112 in the Aristides, the highest on record for 2020.

“He reminds me very much of Mitole [Eskendereya] in his championship season,” said Asmussen. “Volatile is as fast as any horse I have ever trained. His brilliant performances this year would have made him the likely favorite for the [GI] Breeders' Cup Sprint and a tough horse to beat. I trained his mother and his grandmother, the incredible Lady Tak [Mutakddim], who won multiple Grade I races for us. You will not find a better looking individual than Volatile, nor one with as much speed and raw talent.”

Volatile was his sire's most expensive yearling sold at public auction when hammered down for $850,000 at the 2017 Keeneland September sale.

“Volatile is a beautiful horse that breeders will like when they see him,” said Three Chimneys owner Goncalo Torrealba. “He exudes class and is a great physical. He was brilliant and that is what can make a stallion special. Three Chimneys will proudly support him with plenty of quality mares, I can guarantee that.”

A stud fee for Volatile will be announced at a later date.