Continuing our series on the profitability of stallions, this week we are looking at those who stood between £20,000 and £49,999 in 2020. Three of the top four in this table have subsequently graduated to the higher-fee bracket outlined in Part I of this series last Thursday.

As previously stated, we will be examining sires in four key price brackets according to their yearling sales returns of 2022 set against their fees at the time of covering. The average profit has been determined by the stallion's fee plus a figure of £20,000 for keep costs. The profitable stallions featured must have had at least five yearlings sold in 2022 to make the list and prices have been converted to sterling from Euros according to the conversion rate on the day of the sale.

Just as Dubawi (Ire) headed the list of those in the most expensive fee bracket, so does his son Night Of Thunder (Ire) claim top honours here in this second tier when his fee was €25,000, having been as low as €15,000 for two years before that. It stepped back up a notch after the Kildangan Stud resident's stellar first crop of two-year-olds demonstrated just what their sire was capable of and, since that time, his price has kept climbing to a current high of €100,000. Yes, that's expensive, but the clamour for Night Of Thunder's yearlings was such that 90 were sold (84 of which were in profit) last year for an average of more than eight times his fee at £197,346, with an average profit of £154,565.

Clearly it will be hard to maintain such a level from a higher fee, but it is fair to assume that with the price rise comes an uplift in the quality of mares he is covering, and he was no one-crop wonder. With a top-rated sprinter in Europe to his name last year in Highfield Princess (Fr) and 32 stakes winners from four crops of racing age, Night Of Thunder is fast reaching the elite bracket at only 12 years of age.

Wootton Bassett (GB) has been an incredible success story for Haras d'Etreham, where his stud career started at a lowly €6,000 fee, which dropped to €4,000 in 2014 and 2015 and rose in line with his achievements from relatively small books of lowly mares in his early years. The figures shown on this table represent his final crop bred in France at €40,000. He has subsequently taken another two big price leaps following his move to Coolmore in Ireland – to €100,000 and now €150,000. That, predictably, has been accompanied by strong support from plenty of big breeders. His upward rise will need to continue but, given the mares he has covered in recent years, it would be staggering if it doesn't. Like Dubawi and his sons, Wootton Bassett provides a useful outcross option for many via the Mr Prospector line, in this instance through Mr P's extremely influential son Gone West, who is Wootton Bassett's great grandsire.

Wootton Bassett has at least one top Classic prospect in the Group 1-winning juvenile Al Riffa (Fr), who provides an early example of just what his sire of capable of when crossed with Galileo (Ire). His 83 yearlings sold in 2022 returned an average price of £151,427, giving him a profit margin of £94,978.

Starspangledbanner (Aus) had noted poor fertility at the outset of his career but this appears to have been largely overcome, which is a bonus to breeders. From 121 mares covered in 2020 at a fee of €22,500, 62 of his yearlings were sold with a decent profit margin of £70,801. This year marks the 16-year-old's career-high fee of €50,000, which means that unlike Night Of Thunder, Wootton Bassett and Camelot (GB), Starspangledbanner will remain in this bracket for now. He is joined at stud this season by his high-flying son State Of Rest (Ire), a Group 1 winner in four different countries, and is responsible for one of the most exciting sprinter/milers in Hong Kong, California Spangle (Ire), who recently downed the colours of the outstanding Golden Sixty (Aus). It is easy to see why Starspangledbanner's popularity has been consistently high, just like his fellow Coolmore-based forefathers Choisir (Aus), Danehill Dancer (Ire), and Danehill.

Then there's Camelot, the horse who should be a Triple Crown winner and the sole remaining son of Montjeu (Ire) in the Flat division in Britain and Ireland (his fellow Derby winner Authorized (Ire) is still plying his trade in Turkey).

Camelot may divide opinion but as the sire of ten Group/Grade 1 winners in five different countries he is unquestionably a good stallion, and one who has piqued the interest of Australian buyers thanks to the exploits of Cox Plate winner Sir Dragonet and dual Group 1 winner Russian Camelot (Ire), who is now at Widden Stud. His two highfliers of last year, Irish Champion S. victor Luxembourg (Ire) and Deutsches Derby hero Sammarco (Ger), remain in training and the yearlings of 2022 posted average profit of £54,918 from the 45 that were sold. That crop was conceived at €40,000, and Camelot's fee rose to €60,000 the following year, where it is again now after a brief high of €75,000. 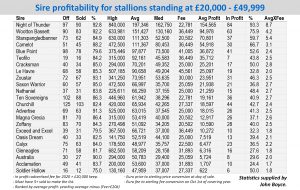 With Night Of Thunder out in front, there is plenty for the Darley team to like about this list and they have another three in the top ten at varying stages of their career: Blue Point (Ire), Teofilo (Ire), and Cracksman (GB). Much will be expected of Blue Point this year, and with 98 of his first-crop yearlings offered in 2022 it is clear that breeders viewed him as a commercial prospect from the outset. He is after all made in the image of his late and celebrated sire Shamardal and his race record had that intoxicating blend of precocity and speed which is catnip to modern-day breeders.

Having started out at €45,000, he is now down to €35,000 for his fourth season at stud, and his first yearlings returned average profit of £36,872. Of course this season is crucial for him as we start to see his first runners but you can bet that Charlie Appleby has a few smart juveniles up his sleeve by the sire who lit up Royal Ascot not once but twice in a week with a Group 1 double. A two-year-old winner at the same meeting this year for Blue Point would be just the ticket to get his secondary career off to a similarly fast start.

Cracksman took a few people by surprise last year with a spate of relatively early winners which has grown to a list of 18 to date, including the G2 Premio Dormello winner Aloa (GB) and Listed Star S. victrix Dance In The Grass (GB). His opening fee of £25,000, gave average profit of £25,201 on the 34 yearlings sold from his second crop. Cracksman is now available at £17,500 and, given his own racing profile, there is cause to believe that his offspring take another step forward in their Classic season and beyond.

Cracksman's fellow first-season sires of 2022, Zoustar (Aus) and Saxon Warrior (Jpn), were also buoyed by solid results from their debutants. Zoustar is of course several seasons ahead in the southern hemisphere. G1 Cheveley Park S winner Lezoo (GB) was the stand-out of his European runners, prompting a fee rise to £30,000 this year from his opening mark of £25,000. From 67 yearlings sold, his average profit margin was £23,951.

Saxon Warrior gives renewed hope of the Deep Impact sire-line taking root in Europe and from his first runners, Victoria Road (Ire) flew the flag for him with a Breeders' Cup victory, while the G1 Prix Marcel Boussac runner-up Gan Teorainn (Ire) has now spread her wings even farther through being exported to Australia after being bought for 1,000,000gns by Yulong Investments. From a starting fee of €30,000, which dipped to €27,500 in 2020, his yearlings averaged almost £67,000 last year, showing average profit of £21,938.

My pick from this list, however, is the dependable Nathaniel (Ire). There are few stallions in the world who will ever sire a filly of the calibre of Enable (GB), but the brilliant light of his stud career shines well beyond that obvious beacon. A Classic heroine in France and Grade 1 victrix in America, backed up the top-class British-trained duo of God Given (GB) and Lady Bowthorpe (GB), could have had Nathaniel pegged as a fillies' sire, but then Desert Crown (GB) breezed down the hill at Epsom to win the Derby with consummate ease.

Nathaniel's success extends beyond the Flat to some smart jumpers, including Zanahiyr (Ire) and Concertista (Fr), and the offers to Newsells Park Stud from National Hunt stallion operations in recent years have surely been numerous.

The average price of the yearlings conceived from Nathaniel's 2020 fee was £66,259, leading to average profit of £21,259. Good on the team at Newsells Park for hanging on to this extremely useful stallion, who surely represents excellent value at his current fee of £15,000.