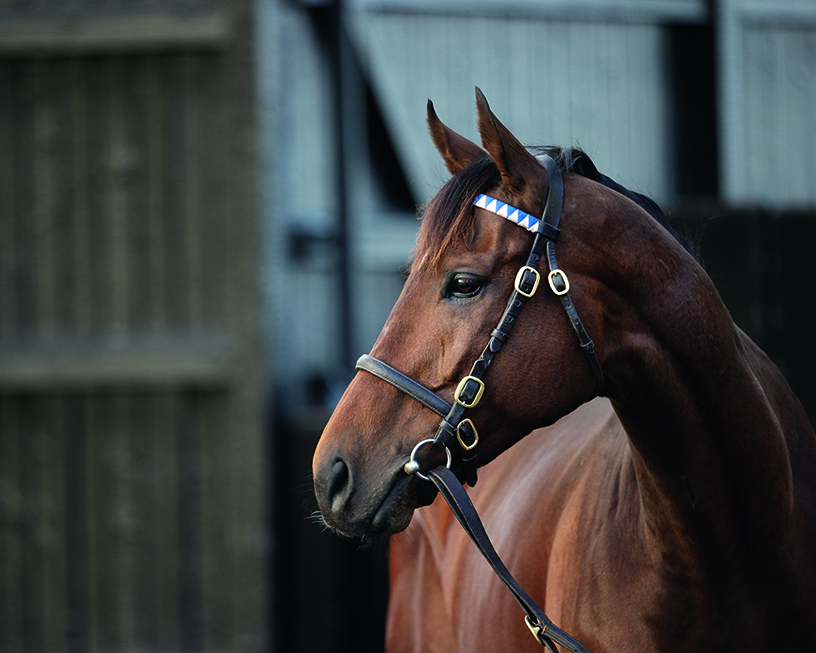 We continue our Value Sires Series with a look at stallions with their first foals arriving in 2022, and what looks a very intriguing bunch. Not only do we have Pinatubo (Ire) (Shamardal), the outstanding 2-year-old who was rated higher than Frankel as a juvenile, but also Ghaiyyath (Ire) (Dubawi {Ire}), Dubawi's best son yet to retire to stud; the Classic-winning Sottsass (Fr) (Siyouni {Fr}), who trained on to add the G1 Prix de l'Arc de Triomphe at four; and the three-time Group 1 and Classic winner Persian King (Ire), the first Group 1 winner by Kingman (GB) to retire to stud. And that's not to mention the Guineas winners, Group 1-winning milers and Royal Ascot winners also contained within this cohort.

The aforementioned Pinatubo retired as the most expensive horse of his sire crop, although his £35,000 starting fee at Darley's Dalham Hall Stud (he remains at that price this year) was likely set with consideration of the uncertainties abounding at the height of the pandemic. One can't help but think, though, that if the bloodstock market can sustain its bullish run through the next few years, those who bred to Pinatubo will be richly rewarded. Indeed, buyers were already doing battle at this year's breeding stock sales for mares in foal to him, with 18 sold for an average of €203,556/£173,402.

Pinatubo was a truly outstanding 2-year-old, going unbeaten in six starts beginning on the all-weather at Wolverhampton in May and culminating in the G1 Dewhurst S. over soft ground in October. In between he took Epsom's Woodcote S., Royal Ascot's Listed Chesham S., Goodwood's G2 Vintage S. and The Curragh's G1 National S. in one of the more powerful displays by a 2-year-old in some time. Pinatubo didn't manage to live up to the comparisons that were being drawn to Frankel at three, but he did add victory in the G1 Prix Jean Prat and placings in the G1 2000 Guineas, G1 St James's Palace S. and G1 Prix du Moulin de Longchamp. By Shamardal, who has a highly successful sire son in Lope De Vega, Pinatubo is out of Lava Flow (Ire) (Dalakhani {Ire}), who won a listed race over 2200 metres at three and whose family traces back to that of the excellent sires Invincible Spirit (Ire) and Kodiac (GB). Pinatubo's debut book of 151 mares included 79 black-type winners or producers.

Sottsass was the only other stallion in this crop whose first in-foal mares averaged in the six figures, his eight sold averaging €169,520/£144,498. A winner at two, Classic winner at three and Arc winner at four who has been heavily supported by his owner Peter Brant, Sottsass covered 133 mares last year and is cut to €25,000 this year, having started at €30,000.

Persian King and Hello Youmzain (Ire) (Kodiac {GB}) were the most expensive horses to retire in France last year, both at Etreham, and they stay at their opening fees of €30,000 and €25,000, respectively. They were a massive coup for French breeders and another sign of the commitment by the de Chambure family and their partners to continually better the French stallion ranks. Beautifully bred by Dayton Investments from the family of Peintre Celebre, Persian King beat the future G1 2000 Guineas winner Magna Grecia (Ire) (Invincible Spirit {Ire}) in the G3 Autumn S. at two before going on to win the G1 Poule d'Essai des Poulains, and the G1 Prix d'Ispahan and G1 Prix du Moulin, and finish third in the Arc, at four. Hello Youmzain is by the rising sire of sires Kodiac, and won the G2 Criterium de Maisons-Laffitte at two, the G1 Sprint Cup S. at three and the G1 Diamond Jubilee S. at four. Persian King and Hello Youmzain head a vintage crop to have retired to France in this cohort, which includes another Royal Ascot-winning sprinter in Golden Horde (Ire) (Lethal Force {Ire}) (Sumbe, €8,000); Classic-winning miler Romanised (Ire) (Holy Roman Emperor {Ire}) (Haras de Bouquetot, €7,000); G1 Prix de l'Abbaye victor Wooded (Ire) (Wootton Bassett {GB}) (Bouquetot, €15,000); and G2 Gimcrack S. and G2 Champagne S. winner Threat (Ire) (Footstepsinthesand {GB}) (€6,000, Haras du Mont Goubert).

Earthlight (Ire) (Shamardal) is trimmed from €20,000 to €18,000 at Darley's Kildangan Stud. Earthlight, who was very popular with breeders covering 162 mares last year, was an excellent 2-year-old, unbeaten in five starts including the G1 Prix Morny and G1 Middle Park S. Though a setback kept him out of the Classics last year he won the G3 Prix du Pin and the Listed Prix Kistena before finishing second, a neck behind One Master (GB) (Fastnet Rock {Aus}), in the G1 Prix de la Foret.

During a season in which Bobby's Kitten sired one of the top fillies of her generation in Sandrine (GB), G1 2000 Guineas winner Kameko (Kitten's Joy) covered 113 mares for £25,000. Kameko, who also won the G1 Vertem Futurity Trophy S. at two and the G2 Joel S. against older horses at three, gets a small cut to £20,000.

Mohaather (GB) (Showcasing {GB}) and Without Parole (GB) (Frankel {GB}) are Group 1-winning milers available in Britain. Mohaather put in the miling performance of a generation when beating Circus Maximus and the Guineas winners Siskin (First Defence) and Kameko in last year's G1 Sussex S., and he is trimmed to £15,000 from £20,000 at Shadwell after covering 146 mares. Without Parole likewise proved among the best milers of his generation when winning the St James's Palace S. in his first try in pattern company in 2018, and he is down to £8,000 from £10,000 at Newsells Park Stud, having covered 85 mares this year.

Bronze: King Of Change (Derrinstown Stud, €6,000) – King Of Change is one of two sons of the good but fertility troubled stallion Farhh (GB) in this sire crop who offer value in Ireland, the other being the speedy Far Above. King Of Change had a short but brilliant career, finishing second twice at two before breaking his maiden first-out at three and finishing a long-odds second to Magna Grecia in the 2000 Guineas. King Of Change proved that breakout performance wasn't a fluke, winning the Listed Fortune S. going a mile at Sandown before taking the G1 Queen Elizabeth II S. King Of Change, who retired with a rating of 120, is a half-brother to the hard-knocking, multiple group-winning miler Century Dream (Ire) (Cape Cross {Ire}), who was still at the top of his game running as an entire at age seven this year. King Of Change is out of the winning Echo Of Light (GB) mare Salacia (Ire), and his second and third dams are both group winners and stakes producers. King Of Change covered 69 mares this year at €7,000, and his pedigree should make him accessible to a wide variety of mares.

Silver: Circus Maximus (€12,500) – Circus Maximus, bred on a similar cross to that which has produced Frankel (GB) and Teofilo (Ire), was a miler of the highest quality who rarely failed to fire across three seasons on the track. A winner at two, Circus Maximus was third behind Persian King and Magna Grecia in what proved to be a vintage renewal of the G3 Autumn S. After running sixth in the Derby, Circus Maximus was dropped back to a mile for the St James's Palace S. and that absolutely proved his niche when he triumphed over a field that included Too Darn Hot (GB) and Phoenix Of Spain (Ire). Circus Maximus added the G1 Prix du Moulin de Longchamp before season's end. He made a victorious return to Royal Ascot last June when taking the G1 Queen Anne S., and though that would prove his final victory he picked up placings in the Sussex S., Prix Jacques le Marois, Prix du Moulin and Breeders' Cup Mile before year's end, retiring with an official rating of 120. Circus Maximus was bred and co-campaigned by the Niarchos Family out of their G2 Duke of Cambridge S. winner and multiple Group 1-placed Duntle (Ire) (Danehill Dancer {Ire}), and in addition to having a second dam by the class influence Lord At War (Arg), Circus Maximus comes from the extended family of champion filly Allez France. Circus Maximus covered 101 mares last year at a debut fee of €20,000 and received good support from both the Niarchos Family and Coolmore. From the former he bred none other than champion Alpha Centauri (Ire) (Mastercraftsman {Ire}) and Freedonia (GB) (Selkirk), the dam of Group 1-winning filly Albigna (Ire) (Zoffany {Ire}), while Coolmore sent Group 1 producers Butterfly Cove (Ire) (Storm Cat), Night Lagoon (Ger) (Lagunas {GB}) and Night Visit (GB) (Sinndar {Ire}), among others. Circus Maximus takes a steep cut to €12,500, and with excellent credentials and a strong first book behind him, breeders who use Circus Maximus at a reduction in 2022 could be well rewarded.

Gold: Ghaiyyath (€25,000) – at a time when Dubawi's sons are catching fire at stud, his best-ever son on the racecourse at €25,000 has to be excellent value. Heads really began to turn about Dubawi as a sire of sires when his 2000 Guineas and Lockinge S. winner Night Of Thunder (Ire) flew the gates to post one of the best starts ever by a first-season sire in 2019, and as he has continued to go from strength to strength, the likes of New Bay (GB), Zarak (Fr) and Time Test (GB) have joined the fray. Ghaiyyath, who is bred on the same Dubawi/Galileo cross as Night Of Thunder, is out of the G1 1000 Guineas winner, multiple Group 1 producer and Broodmare of the Year Nightime (Ire). He cost Godolphin €1.1-million as a Goffs November Foal and proved worth the wait. The winner of the G3 Autumn S. at two, Ghaiyyath won the G2 Prix d'Harcourt and G1 Grosser Preis von Baden at three but really hit his best stride at four when winning four straight including the G1 Coronation Cup over the Derby winner Anthony Van Dyck (Ire), the G1 Coral-Eclipse over Enable (GB) and the G1 Juddmonte International over Magical (Ire). Ghaiyyath, who was the world's highest-rated horse last year, covered 137 mares last year at a debut fee of €30,000.