Home » Archive » Shared News » Upward Trajectory for Up in Smoke

Upward Trajectory for Up in Smoke 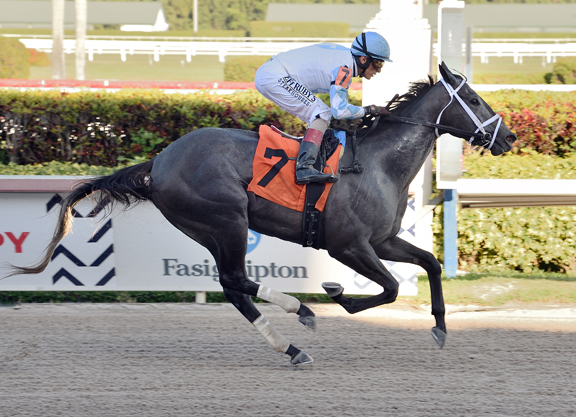 Up in Smoke | Lauren King

Black Type Thoroughbreds and R.A. Hill Stable's Up in Smoke (The Big Beast) streaked to her third straight victory at Gulfstream Park Sunday and, while her late-running theatrics may cause anxious moments for her connections, if her powerful late kicks keep propelling her to victory, it's all ok with bloodstock agent Jake Ballis.

“It's hard to watch because you can't see her for the entire race until they turn for home,” said Ballis, who purchased the filly at last year's Fasig-Tipton Midlantic May sale. “But the replay is a lot more fun. It's not as agonizing. It kind of seems like she doesn't want to be in tight quarters, she resents the kick-back a little bit. [Jockey] Luis [Saez] said he just let her break and do her own thing, let her get comfortable and she has an amazing turn of foot.”

“She breezed very well at Timonium,” Ballis said of the filly's appeal last spring. “I send a lot of the videos to Angel Cordero to review and he thought she stood out among all the videos that I sent. [Trainer] George Weaver was there and he thought she was one of the better fillies in the sale. We had one 2-year-old at that point, but we wanted to get another one and that was the last sale. She was the only one we really focused on. Her gallop-out was very fast and she was sound. So we went ahead and took the risk and as of now, knock on wood, it seems like it is working out.”

Up in Smoke was the 5-2 second choice in her six-furlong debut at Gulfstream Park and Ballis admitted he wasn't quite sure what to expect from the filly.

“She is very calm and relaxed in the mornings, so her works were ok,” he said. “There was nothing that just jumped out that said she would be this good. So I was pleasantly surprised with how she ran.”

After running wide throughout in her unveiling, the sophomore filly powered to the lead in upper stretch and drove clear to an easy 4 3/4-length versus fellow Florida-breds (video), but it was in her second start that things really got interesting. Again facing state-bred company and again going six furlongs at Gulfstream Mar. 5, Up in Smoke was sent off the heavy 4-5 favorite. In the mix early, the filly suddenly dropped back to last and appeared, if not injured, at least hopelessly beaten. But she burst back into contention and soared down the center of the track before drawing clear to win by four lengths (video).

“I thought something had happened to her,” Ballis admitted. “Johnny [Velazquez] was urging her early and she wasn't keeping up and she was dead last. I just remember George looked at me and we were just wondering what was going on. He was in shock and I just put my head in my hands thinking, 'Please don't let anything bad happen.' Then I started hearing George and Randy Hill yelling, 'Come on Johnny.' And I looked back up thinking, 'What are they talking about?' That was an unbelievable range of emotions from thinking you're 4-5 and she'd win and then maybe we are going to get eased and get beat by 20-30 lengths, to we're going to win and not only win, but win going away by four. When she made that move, I've never seen anything like that.”

With uncertainty on the racing calendar looming, connections decided to have Up in Smoke face older fillies and in open company for the first time Sunday at Gulfstream.

“We were hoping for a straight 3-year-old race, there is one next week, but we didn't know if they were going to shut down, so George said, 'She's doing well. Let's enter,'” Ballis explained.

Sunday's company may have been different, but the result was the same as Up in Smoke came powering down the lane to win by three lengths as the even-money favorite (video).

As for what might be next for the talented filly, Ballis said, “It's hard to map out a plan when we don't know what's going to happen. We do want to stretch her out. We don't think she is a true sprinter. Her pedigree would say she is, but her running style makes me think she's going to stretch out. So ideally, we are going to go stakes races now from here on out. And hopefully we can progress, go seven-eighths or a mile. And if she handles that, keep going distance-wise. She may be a one-turn mile type, we won't know until we try it. Hopefully, if Saratoga runs, and if she keeps doing well, the goal would be to try and run in the GI Test S.”

The Black Type Thoroughbreds ownership group includes six partners, with only Reagan Swinbank, who owned a share in multiple graded placed Join in the Dance (Sky Mesa), a returning owner.

“I've known Randy for years just through George,” Ballis said. “He said he would partner with us if we found something nice. This is the first horse we've partnered on.”

With a group of mostly new owners, Ballis agreed the biggest challenge was to enjoy the ride while setting realistic expectations.

“That's the hard part,” he said with a rueful chuckle. “Trying to temper the expectations and let them know it's not that easy. We were on a good run for a couple of years and then we had two pretty bad years. So it's nice to have a good filly again. And hopefully they don't think this is the norm.”