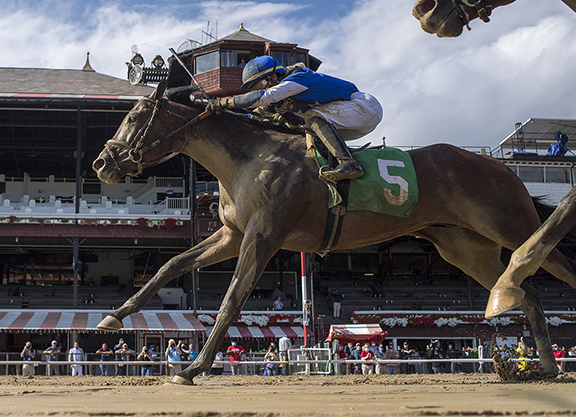 Sent off right at his morning line of 6-1, Jeff Drown and Don Rachel's FOUNDER (c, 2, Upstart–Blue Beryl, by Bernstein) looked to have it all to do at the midpoint of his career debut Saturday at Saratoga, but he caught the eye with a rail run into the stretch, came out at the eighth pole, raced as green as the boggy grass and improbably ran down his better-backed stablemate Highly Motivated (Into Mischief) to open his account at first asking. The highly regarded two favorites, Newbomb (Speightstown) and Happymac (Runhappy), had hustled to the lead early from the extreme inside and outside posts and opened up on the field. While Founder was trailing the field in ninth, Highly Motivated tracked in third, overtaking the pair about a sixteenth from home as Founder was swerving down the stretch. Highly Motivated switched to his wrong lead but looked clear until Founder rallied furiously late for the neck triumph.

A $220,000 Keeneland September yearling purchase, the bay colt was knocked down to Mike Ryan, agent for the same connections that race GI Breeders' Cup Juvenile Turf hero Structor (Palace Malice), for $600,000 at OBS March after breezing a quarter-mile in :21 flat, making headlines as the most expensive 2-year-old sales horse of his sire's first crop. Founder is now the fourth winner for his first-crop sire (by Flatter). The winner's dam has also produced a now-yearling colt by Unified and a 2020 colt by Mo Town. She has been bred back to West Coast for next year.