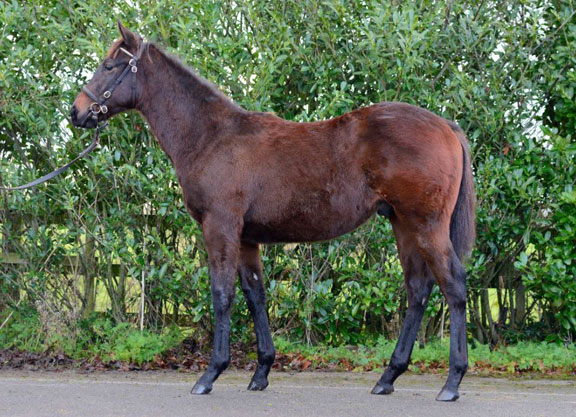 Martin Cooney arrived at the Goffs November Breeding Stock Sale in 2018 with a modest budget and a simple plan: “buy a mare that was in foal, and that could be a quick way to turn our money around with a bit of luck,” the Fethard-based horseman said.

On Cooney's shortlist the first day of the sale was the 8-year-old Hard Spun mare Plying, in foal to Starspangledbanner (Aus). A $200,000 yearling, Plying had won three times for Sheikh Mohammed and trainer Henri-Alex Pantall before being culled for €12,000 at the Arqana December Breeding Stock Sale in 2013. By the time she resurfaced at Goffs five years later, Plying had produced the placed 3-year-old filly Saguaro (Ire) and the unraced 2-year-old Alexander James (Ire) (Camelot {GB}). She had a yearling colt by Zoffany (Ire), and her No Nay Never filly foal had made €40,000 at the Goffs foal sale two days earlier.

“We went through a good few mares and it came down to one or two that we liked,” Cooney recalled. “Plying had a great walk and a good girth on her. I thought she had a great head on her. She had the frame of being a strong mare and I thought maybe with us, having a smaller number of horses, that she might improve. She was in foal to Starspangledbanner, which was a plus.”

Cooney followed Plying into the ring and was able to secure her on a bid of €21,000.

“I'd say we were lucky on the day; I think someone else at the last second tried to drop in another bid, but the hammer went down and your man said, 'too late sir.' From that day on, in fairness, the mare has been lucky.”

That sir, whoever he is, will doubtless be lamenting not raising his hand quicker, as Plying is now the dam of two stakes winners, including the aforementioned No Nay Never filly who was subsequently named Alcohol Free (Ire) and won this year's G1 Cheveley Park S. for owner Jeff Smith and trainer Andrew Balding. Alexander James had previously bolstered the page last October with a listed victory in France as a 3-year-old.

Cooney, through his Jossestown Farm, brings Plying's latest foal, a colt by Dandy Man, to this year's edition of the Goffs November Foal Sale, and he sells during the premiere Sunday session as lot 698.

“He is a cracker,” Cooney said of the April-foaled bay. “He's got size, he's got scope, he's got the looks. I'd be shocked if he doesn't make a few quid.”

Expanding on the decision to send Plying to Dandy Man, Cooney said, “Plying is American-bred and has a speedy pedigree. Dandy Man is full of speed but as well as that he isn't an over-big type of horse. She tends to throw them with size, not in a bad way, but we thought the perfect model might come out with the Dandy Man cross. I thought the match would work well and to be honest, it did. He's correct and he walks. It's hard to explain, but he is a bull. I wouldn't change him in any way. He's strong in every way and he has a good back end to him, which is important for those speed horses that will run five or six furlongs.”

Cooney admitted that anything the Dandy Man colt brings him is a bonus; the Starspangledbanner filly Plying produced for Cooney covered the cost of her dam as well as the Dandy Man covering fee when she brought €40,000 at Goffs February earlier this year. She was pinhooked by Knockatrina House for 130,000gns at last month's Tattersalls December Yearling Sale.

“Plying had a lovely filly foal by Starspangledbanner,” Cooney said. “She colicked at the first sale she went to [last year's Goffs November Foal Sale] and we were a bit unlucky because there were plenty of people on her. She went to the November sale and colicked on the day of the sale. It wasn't the right thing to do to send her through the ring, so we brought her home and minded her and she went to the next sale and made €40,000, which covered the cost of the mare and the covering fee of Dandy Man. And then the updates happened after that.”

Cooney said he followed Alcohol Free's progress as she was broken in and sent to Andrew Balding's Kingsclere Stables.

“I heard through the grapevine that she might be going to Andrew Balding's after being broken, which is always a plus,” Cooney said. “The manager at [Jeff Smith's] Littleton Stud told me she was a real nice physical and they really liked her.”

Alcohol Free won at first asking on Aug. 15 at Newbury before running a fine race to be second to Happy Romance (Ire) (Dandy Man {Ire}) in the G3 Dick Poole S. at Salisbury on Sept. 3. Sent off at 7-2 in the G1 Cheveley Park S. three weeks later, Alcohol Free narrowly led Miss Amulet (Ire) (Sir Prancealot {Ire}) through the opening furlongs before drawing further clear at halfway. That rival re-rallied in the closing stages with G3 Firth of Clyde S. winner Umm Kulthum (Ire) (Kodiac {GB}) also proving a tough adversary, but Alcohol Free hit the line a half-length the best much to the delight of her connections, not least Cooney.

“To be honest, I nearly had a heart attack watching the Group 1,” Cooney recalled. “I nearly threw the telly out the window watching it. I couldn't believe it. We were ecstatic. You hope that something will do that, but the likelihood of that happening is slim to none. It doesn't really happen to an ordinary Joe; usually those pedigrees are always with the bigger operations.

“We have always had horses but we've never had a pedigree like that. It's nice for the small man to get on top.”

Indeed, Cooney said Plying is currently one of two mares in his barn, and he also pinhooks a few foals annually, at both flat and National Hunt Sales. And chances are good he'll be back at the breeding stock sale next week looking to grow his broodmare band.

“The idea going forward would be to try to find another Plying,” he said. “We'd be interested in going to the sales again and trying to find a gem that maybe we could syndicate, put in foal to a good sire and maybe it just might take off again.”

Cooney acknowledged that sire power was an important aspect of Plying's page at the time of her purchase, despite the fact she hadn't yet hit as a broodmare.

“The thing we liked about Plying was that on her page, she had one runner, a High Chaparral that didn't show much, but after that she had a Camelot, a Zoffany and a No Nay Never, which on any page suggests you have a fair chance for the mare to throw a winner. That really kind of sold us on her.”

Plying is currently in foal to another Coolmore sire in Gleneagles (Ire), and while a 2021 mating hasn't been set in stone, Plying looks likely to get another upgrade.

“We're flat out thinking about what would be the right thing to do and where to go,” Cooney said. “I personally would love to go to Kingman (GB). I think she'd have an absolutely gorgeous horse, but there also is the likes of Lope De Vega-he's another top-class stallion. There's nothing confirmed yet but we're thinking the likes of them.”

Cooney began 2020 with a profitable mare in his barn, and is ending the year at the sales with a half-sibling to a 2-year-old Group 1 winner and Classic contender. “The dream is still alive,” as Cooney himself said, but he is nonetheless keeping his feet on the ground.

“The simple and short story of it is that we went looking to buy a mare that could breed winners from,” he said. “She was the one, and it worked out.”