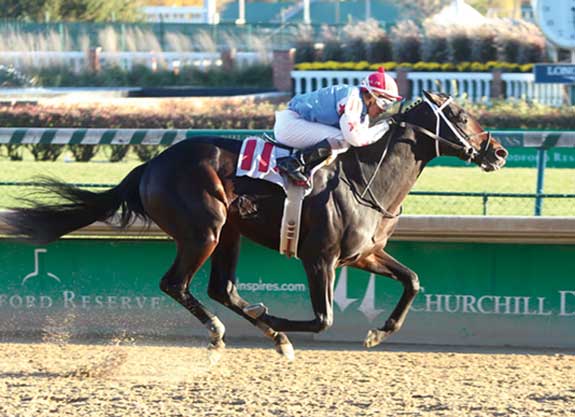 Michael Langford's 'TDN Rising Star' Untrapped (Trappe Shot), with only a maiden win to his credit, but on the board in five graded races, finally got his picture taken with a late-charging victory over Battle of Midway (Smart Strike) in the
GIII Oklahoma Derby Sunday at Remington Park.
The victory was a homecoming of sorts for Hall of Famer Steve Asmussen, who won his first training title at Remington Park and was winning his first Oklahoma Derby with his 22nd starter in the race.
“Remington means a ton to me,” Asmussen, who teamed with jockey Ricardo Santana to win four stakes on the card Sunday, said. “The first time we were ever leading trainer was here in 1992 and Remington Park is definitely a place we got rolling and got started. It was very frustrating for us that we had never won the Remington Derby, but we're on the cup now. Hopefully this will be the first of many.”
Untrapped, sent off at 11-1, broke sharply to take the early lead before deferring to sit in the pocket up the backstretch, just behind splits of :23.90 and :47.54. Patiently handled while saving ground on the turn, he tipped into the clear in midstretch. Setting his sights on favored fellow 'TDN Rising Star' Battle of Midway, Untrapped rolled past that foe with a sixteenth remaining and kicked clear late to a 1 3/4-length success in 1:48.62.
“Mike and I talked after his last race and decided we would freshen him up for this and point directly at it,” Asmussen said. “He put in some very good works for it–a couple of them with Iron Fist (Tapit) who won earlier on the card–that gave us a lot of confidence. The horse broke sharply and Ricky took advantage of that, put him in a good spot, got him to settle behind and have enough horse late to finish with. We've always thought Untrapped was a quality horse and it's great to see him in the winner's circle for a race like this.”
GI Haskell Invitational winner Girvin, the 8-5 second choice, was well back early and was forced to wait for racing room on the far turn. Five wide into the stretch, he offered a mild late rally to finish fifth.
Untrapped graduated in his second trip to the post when he was tabbed a 'TDN Rising Star' after a 5 1/4-length victory at Churchill Downs Nov. 20. He opened his sophomore campaign with runner-up efforts in the GIII Lecomte S. and GII Risen Star S. before shipping to Oaklawn for a third-place finish behind Malagacy (Shackleford) in the Mar. 18 GII Rebel S. He went into the GI Kentucky Derby off a sixth-place finish in the Apr. 15 GI Arkansas Derby and was a well-beaten 12th in the main event. Untrapped was third behind Irap (Tiznow) and Girvin (Tale of Ekati) in the June 24 GIII Ohio Derby and again third behind Irap and the reopposing Colonelsdarktemper (Colonel John) in the July 15 GIII Indiana Derby.
Asked where Untrapped might start next, Asmussen said, “We will see how he comes out of this. It was quite obvious how he responded to us backing up and giving him a little time. He is such a beautiful horse and doing really well. Wherever we run him, we want to have as much confidence in him as we felt like we did today.”

Pedigree Notes:
Untrapped's half-sister by Blame sold for $75,000 at the recently concluded Keeneland September Yearling Sale. The unraced Exit Three, like her dam Castanea, was bred by Shack Parrish's Indian Creek, and produced a filly by Orb this year before being bred back to sprint champion Runhappy. The winner's third dam is Yarn, who also produced the dam of champion Johannesburg (Hennessy), as well as graded stakes winner Tale of the Cat (Storm Cat). Yarn is also the dam of Spunoutacontrol (Wild Again), who produced multiple graded stakes winner Fed Biz (Giant's Causeway). This is also the family of Grade I winner Preach (Mr. Prospector) and her son Pulpit (A.P. Indy).