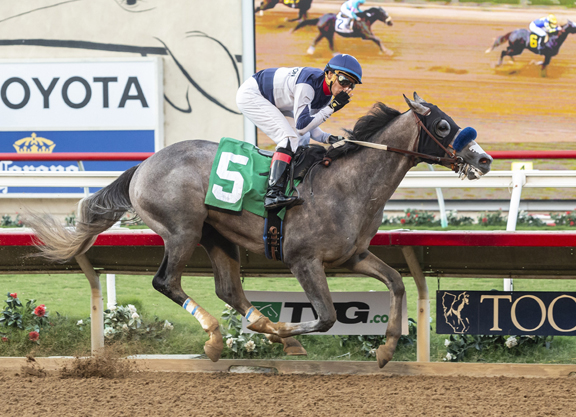 George Papaprodromou doesn't believe that training horses is all that difficult.

“All you need is to have the horse,” he said. “If you don't have good horses forget about it. A good horse makes you a good trainer.”

Not all owners believe that, which is why so many of the bigger owners virtually never give someone like Papaprodromou a chance. He's lucky that there are still a few owners left like Rustin Kretz, who see the advantages of having a trainer with a smaller stable who is more hands on than the so called super trainers. That's why he picked Papaprodromou to train American Theorem (American Pharoah), a professional 1 1/2-length winner over a tough group of maidens Saturday at Del Mar. The horse gave every indication that he belongs at the very top of anyone's list of the best 2-year-old males in California.

Papaprodromou and Kretz don't know what they have yet and probably won't until the colt runs back in the GI American Pharoah S. Sept. 27 at Santa Anita. But there's one thing Kretz is certain of: he picked the right guy to train this horse.

“George is really passionate about what he does,” Kretz said. “Though, I have a number of horses, I am still a smaller owner. I'm not one of the type of clients that a Bob Baffert takes on. George gives you a lot of insights about how the horses are doing and he cares a lot. I appreciate the partnerships with George. George is a really hard worker and it looks like the two of us have gotten lucky with this one.”

There is certainly some truth to Papaprodromou's theory that good horses make good trainers and not vice versa, but for years he had a hard time finding anyone who would give him a horse who could run. Training since 2003, through Sunday, he's had 132 winners from 1,494 starters. He's also had two graded stakes wins, with Mr. Roary (Scat Daddy) in the 2017 GIII Eddie D. S. and with Imperative (Bernardini) in the GII 2014 Charles Town Classic.

He learned under his father, Andreas Papaprodromou, and then took over the family stable in 2003. In his first four years out on his own, he won just nine races. But, thanks in large part to Kretz, his stable has grown in recent years and he says he now has about 30 horses.

“It's a great feeling,” Papaprodromou said of Saturday's win. “Every year with Mr. Kretz we've been buying babies and trying to come up with a good one. I have a small barn and it's not easy when you run against Baffert and those other guys with the $1-million horses.”

Bred by Sierra Farm, American Theorem RNA'd at $190,000 at the 2018 Keeneland September sale. Kretz later reached a deal to buy the horse privately from the breeder for $200,000

“We were at Keeneland, where I normally shop for fillies, but this year I decided I wanted a colt,” Kretz said. “I always use Gayle Van Leer as our advisor and always ask her to go back and take a second look at the horses who were RNAs. Usually, with the ones I ask about, she says they're not horses you want to buy. But with this one, she really liked him and said we ought to go for it. I was a big American Pharoah fan. I thinking getting a colt by him that's like this one was a steal.”

“There are a lot of American Pharoahs who sold for more than him, but $200,000, that's not that cheap,” said Papaprodromou ” We liked him. My owner isn't like some of the owners who have the big-name trainers. He can't spend $1 million for a horse, so he was perfect for our budget.”

To no one's surprise, Baffert had two starters in the race, first-timer Backshot (Tapiture) and Hydrogen (Violence), who finished third in his debut. Even with his breeding, American Theorem, considering the competition and the lack of exposure Papaprodromou gets, figured to be an afterthought with the bettors. Instead, he was the 2-1 favorite.

“George was going up against two Bafferts and he's notorious for not cranking his horses up for their first starts,” Kretz said.  “When I walked into the paddock we weren't the favorite and then a few minutes later we were. I thought then, 'Geez, this is true. This is not just George talking this horse up. This horse is for real.'”

With jockey Tiago Pereira aboard, American Theorem was seventh early, had to wait for room and then took off when he got clear. Hydrogen was second for Baffert. Click for video replay.

“I think he learned a lot,” Kretz said. “It was perfect. He was behind a wall of horses, got dirt in his face. Everything about his race was good for him. He's a classy guy. You go by the barn and he's not trying to rip your head off. He's super calm and he let's you hug on him. I understand that personality-wise American Pharoah was the exact same way.”

As expected, after the race, Papaprodromou's phone started to blow up, with multiple people offering to buy the horse or buy a piece of him.

Kretz said they can stop calling.

“He's not for sale.” said Kretz, who has about 25 horses in training. “George doesn't really get a horse ready for their first start and look what he did. I think we have something pretty special. My dream isn't to flip the horse, it's to go to the [GI] Kentucky Derby. That's how I got passionate about racing, going to the Derby for the first time as a fan in 2010. After that experience, all I wanted was to have a horse of my own in the race.”

There's a long way to go, but should American Theorem make the Derby, Papaprodromou will be a rookie in the race. But don't expect him to lack confidence or be overwhelmed by the many Hall of Famers he'll be going up against. Remember his theory: “it's the horse that makes the trainer.”

“I know with a yearling there's only so much you can see,” he said. “I really wanted an American Pharoah out of that sale. And, I think, we've come up with a good one. I think we might just get lucky with this one.”