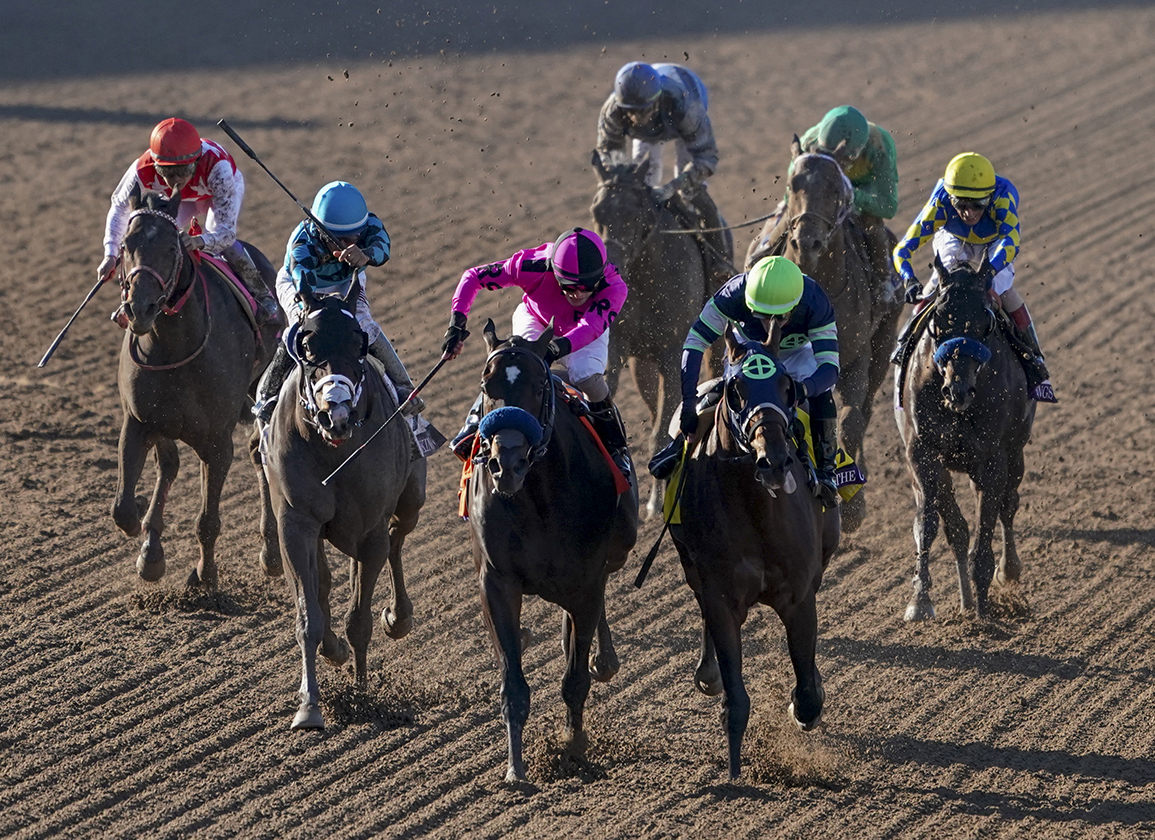 Storm the Court (inside) holds on in the Juvenile | Eclipse Sportswire

The GI Breeders' Cup Juvenile was the most anticipated race of the day, one that included a pair of potential superstars that seemed to have what it takes to win on this day and then dominate some six months later at Churchill Downs. That's how highly regarded Dennis' Moment (Tiznow) and Eight Rings (Empire Maker) were. Instead, the race turned into a befuddling affair that saw longshots dominate and the favorites coming up short.

That's not to say that Storm the Court (Court Vision) was an undeserving winner. He showed up and ran the race of his life. But he was coming off a distant third-place finish in the GI American Pharoah S. and the horse he beat Friday was Anneau d'Or (Medaglia d'Oro), who had run just once, in a maiden race on the turf at Golden Gate Fields.

The skeptics–and there will be many–will be quick to discount his chances of parlaying Friday's win into a victory in the GI Kentucky Derby.

But there was a 2-year-old on the opening day of the Breeders' Cup that you can easily envision being a major player in the 2020 Triple Crown. Even if he is a grass horse.

Why not GI Breeders' Cup Juvenile Turf winner Structor (Palace Malice)? With his win Friday, he is undefeated in three starts and his credentials now include a Breeders' Cup victory. Chad Brown could take the conventional path next year and point for NYRA's rich Turf Trinity series, but the trainer revealed after the win that he is thinking Kentucky Derby.

“I'm curious to find out what he can do on the dirt in the spring,” Brown said of the $850,000 2-year-old purchase. “We've been running him on the turf because there are more distance races available to him than had we started out on dirt.”

Because he is a freshman sire, Palace Malice is still largely an unknown. But the best guess at this point is that his offspring will do just fine on the dirt. He is a son of Curlin and never so much as ran on the turf during a 19-start career.

That Brown, who is seeking his first Kentucky Derby win, was so quick to say he will point this horse to the Derby preps next year speaks volumes. He is a future Hall of Famer and one of the reasons why is he understands his horses strengths and weaknesses, where they belong and where they don't. He's rarely wrong, so if he thinks Structor has what it takes to become a serious Derby threat then Structor is probably going to be a serious Derby threat.

Meanwhile, it's too early to discount Dennis' Moment, who was last of eight, and Eight Rings, who was sixth. Dennis' Moment had an excuse as he stumbled at the start and wound up last in the early going. Under Irad Ortiz Jr., he never got going, likely the result of his mishap out of the gate. As for Eight Rings, he had a perfect trip and seemed ready to take control of the race when sitting second midway on the far turn. Instead, he was empty when it mattered. With a horse of this quality, the race was too bad to be true and might just be a performance that one can draw a line through.

Nonetheless, the Juvenile resulted in a step backward for the two favorites. Most likely, the Kentucky Derby winner did not appear on the Friday card at Santa Anita, but if he did, chances are it was Structor.

Random Thoughts on an Interesting Day of Racing Future Stars Friday began with a win by the favored Four Wheel Drive (American Pharoah) in the GII Breeders' Cup Juvenile Turf Sprint. In the first chance any of his offspring had to win a Breeders' Cup race, American Pharoah stamped himself as both a Breeders' Cup winner and the sire of a Breeders' Cup winner. The 2015 Triple Crown winner is off to a fast start as sire, with one unexpected twist. Another horse who did not start on the turf and has a dirt pedigree, he is showing signs of being an excellent turf sire. Not only was he the sire of this race's winner, but also of the third-place finisher, Another Miracle. He has had four stakes winners to date, all of them coming on the grass. The list includes Sweet Melania, who was third in the GI Breeders' Cup Juvenile Turf.

It seemed to have gone unnoticed, but the betting public was thrown a curveball in the Juvenile Fillies Turf. The past performances listed winner Sharing (Speightsown) as having worn blinkers in her last start, the Selima S. at Laurel. When she appeared on the track Friday without blinkers, bettors may have wondered what was going on since no equipment change was announced. It turns out she did not wear blinkers in the Selima. It was a small thing, but when providing the betting public with data, it's important to get everything right. This was a mistake that never should have happened.

The NBC commentators were gushing over bloodstock agent Liz Crow after British Idiom (Flashback) won the GI Juvenile Fillies. The praise was deserved: Crow was the one who picked out Monomoy Girl (Tapizar) at the 2016 Keeneland September sale, where she sold for the modest sum of $100,000. Last year, she won the GI Breeders' Cup Distaff.

Crow struck again for owner Sol Kumin with British Idiom, a $40,000 at the 2018 Fasig-Tipton October sale. Both fillies are trained by Brad Cox.

It was a rough day for the Europeans. There were 15 European shippers on the card and only one, Daahyeh (GB) (Bated Breath {GB}), the second-place finisher in the Juvenile Fillies Turf, managed to hit the board. Aidan O'Brien sent out five horses, with none finishing better than fifth.

One day down, another to go. The best news out of Friday's Breeders' Cup was that no horse was injured. That perhaps overshadowed everything else on the card, and the industry will watch Saturday's races again hoping for the best and fearing the worst. The sport simply cannot afford to have a horse break down during this two-day event when all eyes are on the Breeders' Cup and racing's enemies are poised to create holy hell if there is a fatality.

That doesn't mean that the sport gets a pass on this day. Not a race went by when there wasn't the sight of jockeys whipping their horses. They can say all they want about the padded whips and that horses aren't hurt when struck. It doesn't matter. The general public is never going to accept the whipping of horses. The sport has talked a good game when it comes to banning the whip, but, so far, nothing has changed. The whips were out and in full force on this Friday before a national television audience and a public that has grown weary of the sport's excuses.