Bridlewood Training Taking Off With Thomas 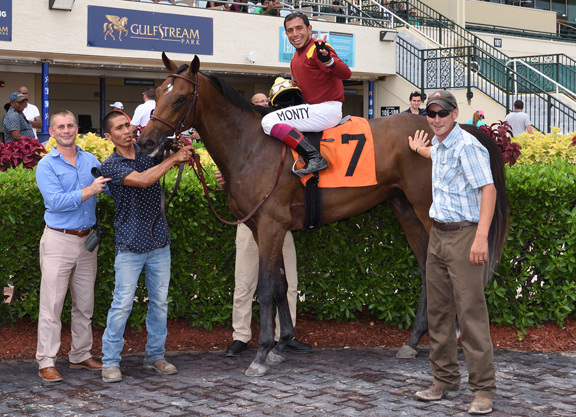 SARATOGA SPRINGS, New York–As a former assistant to top conditioners Todd Pletcher, Christophe Clement and Dale Romans, and now trainer at Bridlewood Farm since billionaires John and Leslie Malone acquired the historic Florida nursery in 2013, Jonathan Thomas has had his hand on plenty of big winners up at Saratoga. In Wednesday's, GII With Anticipation S. he'll run one in his own name in the form of Bob LaPenta's promising Catholic Boy (More Than Ready).

The colt was a fast-finishing debut winner going 7 1/2 grassy furlongs at Gulfstream Park July 20 (video) one of 11 victories enjoyed by Thomas and his team at Bridlewood this season from 42 starters (26%).

“I actually bought him as a short yearling,” Thomas said of Catholic Boy, who was acquired privately after he RNA'd for $190,000 at last year's Keeneland January sale. “He was kind of a two-turn, growthy colt who seemed like he might benefit from an easier jurisdiction. He trained up to his debut organically and, to be honest, we weren't expecting him to jump up and win, but we were certainly happy with it.”

Thomas, who was born and raised on Paul Mellon's famed Rokeby Farm in Virginia and who is a former steeplechase jockey, is pleased with how Catholic Boy is doing entering this major class test.

“He's been training well,” said Thomas. “We brought him up to Saratoga early and let him have an easy work over the turf (4f, :51, 32/54 on the Oklahoma Aug. 25) with [rider] Manny [Franco]. I've been really happy with how he's handled the surroundings, and he's paddock schooled great, gate schooled well. But, obviously, when you come to New York, it's a lot tougher competition, obviously.”

And Thomas knows more about Catholic Boy's competition than most trainers would. He also broke With Anticipation hopeful Earth (Orb) for one of his main clients, Aron Wellman's Eclipse Thoroughbred Partners. Turned over to Pletcher, the dark bay graduated narrowly first out Gulfstream going five furlongs on the lawn, and was a well-beaten third at odds-on in Monmouth's Aug. 6 Tyro S.

“Earth was always a very, very clever horse,” Thomas said. “He picked up on training very early. He had very good instincts. He's a horse who we thought if he got to the races early enough, he was definitely the sort who would win first time out. He was just light on his feet, a quick study.”

What's it like competing at this level with a horse like Catholic Boy who he's had in his care for so long?

“There's nothing better,” said Thomas. “To be training for Mr. LaPenta, and to have bought this horse–we broke him, we've been running him–I've had him since he was a baby. So it's been cool that way as well. But there's no place like Saratoga. Just to have a horse up here to run in a graded stake is fantastic.”

Thomas had 12 starters in 2015 and 18 last year, but has seen significant increased interest from Bridlewood's clients in keeping horses in his care as their on-track careers begin. He's had two prior starts this meet at Saratoga with Eclipse's Orrechiete (Harlan's Holiday), whose best finish was a close third Aug. 14.

“Aron Wellman had a few, I guess you could call them 'experimental types' where the track was maybe just a little bit too much for them.” explained Thomas. “He asked if we'd try to run a couple off the farm. It was new for me–obviously I've got experience on the racetrack–but it's been a learning experience, getting them ready off the farm and trying to figure out the little nuances. As it's worked, a couple of other owners have noticed and asked us to do similar things for them. So far I've been really proud of our team and the results. It's one thing when you have horses with racing experience. You could train them on the moon. It's just a matter of the shipping and getting them there. But I've been really happy with our first- and second-out results. We've had a handful of first-out winners who did 95% of their work at Bridlewood and that's something we're proud of.”

Thomas is quick to point out that the resources he has at his disposal at Bridlewood, whose general manager is George Isaacs, are much more extensive than what is typical at most farms, and that gives him and his team some advantages over conditioners based at racetracks.

“What it's really turned into is more of a training center,” he said of the Ocala operation. “It almost mimics a little Fair Hill. We've got a seven-furlong dirt course, a three-quarter-mile turf track, we've got a five-eighths uphill Tapeta track, saltwater spas–all the amenities. So we're trying to be able to take horses a step further than say your traditional farm. One advantage is that we can use the turf course whenever we want. I think with the variety of terrain we're able to get a bottom into a horse, whereas it might be hard to do at some other places. We're able to cater a little more to a horse's individual needs.”

Bridlewood has had major success on the track itself this year with GI Belmont S. and GII Lambolm South Tampa Bay Derby hero Tapwrit (Tapit), who was acquired in partnership with Eclipse and LaPenta for $1.2 million at last year's Fasig-Tipton Saratoga sale. Gainesway and Whisper Hill have since bought into the Pletcher pupil, who was fourth in last Saturday's GI Travers S.

“It's a real cool story from start to finish,” Thomas said. “We bought him with Aron Wellman and [LaPenta's racing manager] John Panagot, and Aron and John have become very good friends of mine. It's been such a fun partnership. We got together at the sale, made it happen where we had the resources to get the horse bought, and obviously we got him back to Bridlewood, and then to Todd who, aside from being one of my mentors, is an idol of mine–he's someone I'm still awestruck by. To pay back Todd a bit by getting a horse of this ilk to him, and then having become a Classic winner was incredible.”

Thomas also handled the early training of Destin (Giant's Causeway), who came up a nose short in the 2016 “Test of the Champion” for Twin Creeks Racing, Eclipse and Pletcher.

When asked if there are any 2-year-olds he's excited about, Thomas is quick to single out Montauk (Medaglia d'Oro), a son of MGSW Indian Vale (A.P. Indy), grandson of GISW Marley Vale (Forty Niner) and an $850,000 OBSAPR 2-year-old (:10 1/5) owned by the usual suspects: Bridlewood, Eclipse, Twin Creeks and LaPenta.

“He's with Todd at Belmont and he's a very interesting horse,” Thomas said.

Another juvenile Thomas has high hopes for is Moonshine Memories (Malibu Moon), who carried the old Bridlewood silks en route to a 'TDN Rising Star'-worthy winning performance first out at Del Mar Aug. 19. The $650,000 Fasig-Tipton Saratoga buy is owned with the Coolmore partners and is trained by Simon Callaghan.

“I hope Simon will bring her to New York for the [GI] Frizette,” said Thomas. “She was a star yearling for me–I absolutely loved her. That's fun seeing that happen. Plus, obviously, if we can have some success with Coolmore, there's nothing wrong with that.”