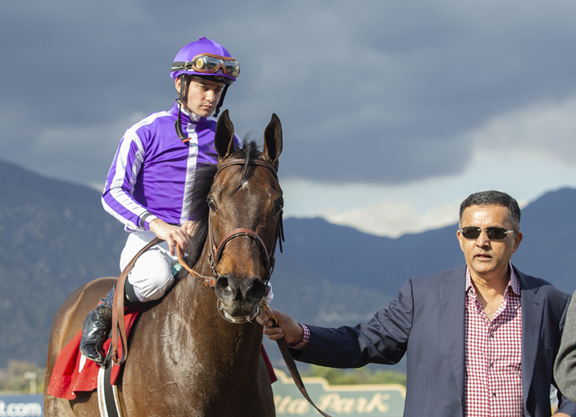 Super talented 'TDN Rising Star' Donna Veloce (Uncle Mo) kicked off her potential trip to the GI Kentucky Oaks with a truly dominant romp in the GIII Santa Ysabel S. at Santa Anita Sunday. The 1-5 favorite, freshened since a runner-up effort in the GI Starlet S. last December, was away awkwardly and forced to bide her time toward the back of the field early. She eventually settled into a more comfortable rhythm while saving ground and creeping up down the backside, and appeared absolutely loaded while traveling in third heading for home. Mounting a three-wide bid into the stretch, she widened at will to streak home 4 1/4 lengths clear of Speech (Mr Speaker) and completed the 1 1/16 miles in 1:45.43. Storie Blue (Empire Maker) rallied from far back for third.

“She was ready, but she stumbled there at the break and that got us in behind those horses, so she was a little bit keen,” said winning rider Flavien Prat. “When we turned down the backside, she dropped the bit and relaxed very well. It's always great when they are able to adjust and I hope she can improve off of this race. She was full of run at the end and she handled everything well.”

Winning trainer Simon Callaghan is also looking for Donna Veloce to move forward after her educational run in the Santa Ysabel.

“I thought it was a perfect race,” Callaghan said. “We didn't plan to take back like that. I thought she would be the fastest filly, but Flavien went to plan B, letting them go when she didn't break good. She got a good schooling, got around them and I think that is going to serve her to good effect in the future. It's definitely a nice thing to have up your sleeve because, particularly in the Oaks, we go that distance and it's a rough race with a big field. It's nice to know that you can take back and she'll relax well.”

Purchased for $450,000 at the 2018 Keeneland September Yearling Sale, Donna Veloce worked a co-bullet :9 4/5 before selling for $800,000 at last year's Fasig-Tipton Gulfstream sale. She opened her career with a head-turning 9 1/4-length romp going 6 1/2 furlongs at Santa Anita Sept. 28 and was quickly thrown into the deep end while making just her second start as the 22-10 favorite in the Nov. 1 GI Breeders' Cup Juvenile Fillies. She ran a bang-up second, beaten just a neck by subsequent 2-year-old champion filly British Idiom (Flashback), that day and came back to finish just a half-length behind three-time Grade I winner Bast (Uncle Mo) in the Dec. 7 GI Starlet S.

“After the Starlet, we gave her some time off, she really had done a lot in a short time and nearly pulled off the Breeders' Cup, but it was nice to give her a break and bring her back then start her here in her 3-year-old campaign,” Callaghan explained.

Donna Veloce will likely make her next start in the Apr. 4 GI Santa Anita Oaks.