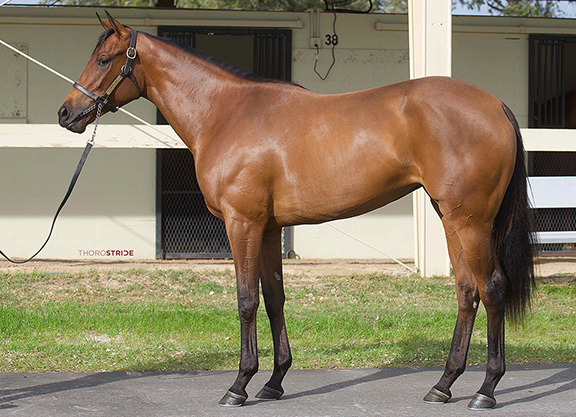 Get On the Bus at OBS | ThoroStride photo

When signing for a $340,000 Uncle Mo filly at this year's OBS March Sale, Dennis O'Neill, noted bloodstock advisor and brother of trainer Doug O'Neill, told the TDN's Steve Sherack that he “kept telling [owner] Paul [Reddam] that she was my female Nyquist.” The April foal, now named Get On the Bus, looks a live chance on debut as she breaks from the rail in Friday's GII Sorrento S. at Del Mar.

The April foal, produced by a winning half-sister to G1 Dubai World Cup hero African Story (GB) (Pivotal {GB}), was a $150,000 Fasig-Tipton Saratoga yearling and was hammered down to O'Neill after working an eighth of a mile in :10 1/5 over the SafeTrack surface at OBS.

“She's real racey and athletic looking,” O'Neill continued. I just loved her breeze and she galloped out really good. She's a very classy filly. We're very excited to get her in the barn.”

Erich Brehm homebred My Girl Red (Texas Red) became the first winner for her freshman sire (by Afleet Alex) with a pacesetting, 4 1/4-length victory going 4 1/2 furlongs at Santa Anita June 14. Flavien Prat elects to stick with My Girl Red for her graded-stakes debut.

The hot-riding Abel Cedillo replaces the Frenchman atop morning-line favorite September Secret (Grazen). A debut ninth against Cal-bred maiden allowance company at Los Alamitos July 2, the gray filly was dangled for a $50,000 tag when facing state-breds at this venue July 24 and made light work of nine rivals, scampering clear to graduate by 7 3/4 lengths.

Trainer Jim Chapman sends out three of the Sorrento's seven runners, the most promising of which looks to be Scaterra (Verrazano), a seven-length winner over the Arlington Poly July 25. Umberto Rispoli sees fit to take the call.