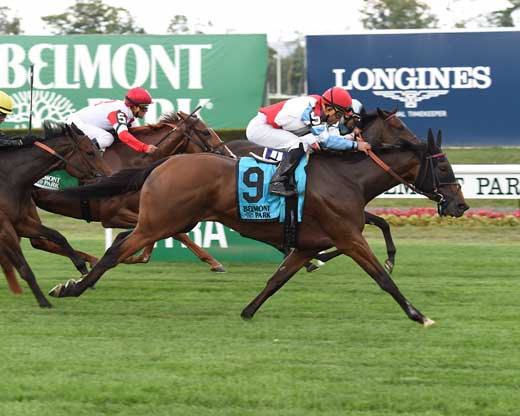 Ultra Brat came with a huge late stretch kick to upset the Christiecat S. at Belmont, leading a one-two finish across the wire for trainer H. Graham Motion. No-showing when 12th in her debut for the Rusty Arnold barn last November at Churchill, the homebred was bet surprisingly hard upon return for this outfit Apr. 23 at Keeneland and ran to the money with a front-running score. Off the board in the GIII Miss Preakness S. May 20 at Pimlico, Ultra Brat was a distant second stretching out June 9 at Delaware before holding on in an allowance sprinting there July 21.

Making her turf debut in this opening day feature, the bay didn’t show her usual early foot and, in fact, dropped out to run last down the backstretch. Winding up on the turn while saving ground along the rail under Joel Rosario, Ultra Brat was still out of the picture until well inside the eighth pole, but she flew down the crown of the course in the final sixteenth to just nail stablemate Miss Katie Mae by a neck.

The winner’s half-sister, It’s Tea Time, won the GIII Lake Placid S. over the Saratoga lawn. Second dam Rootentootenwooten was a GISW on dirt. Prof. McGonagall is responsible for a 2-year-old Tapit filly named Vivacious Venezie, a yearling colt by Malibu Moon and a weanling colt by Hard Spun. She was bred to American Pharoah this season.

“We’ve always wanted to try her on the grass and this seemed like a good spot,” Alice Clapham, assistant to Motion, said. “She just broke a step slow out of the gate, but Joel [Rosario] did the right thing to let her settle there, and then when she got comfortable, she made a nice move. She’s just been getting stronger throughout the year.”