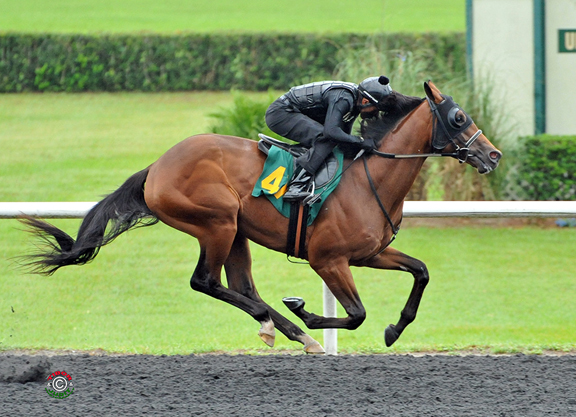 A colt by Uncle Mo (hip 41) turned heads with a powerful three-furlong breeze in :32 2/5 during Thursday's first session of the under-tack preview of the Ocala Breeders' Sales Company's June Sale of 2-Year-Olds and Horses of Racing Age and, when the preview concluded its fourth session Sunday, the time remained unmatched.

“He's an exceptionally good horse,” said consignor Gayle Woods. “I think he's the best horse I've ever had my hands on and I've had some pretty nice horses. I only have to think about him and he gives me goose bumps. He's full of class and he does everything right. He's just a very special horse.”

Mississippi Queen, with this foal in utero, sold for $360,000 at the 2015 Keeneland November sale and he was bred by Paget Bloodstock. Woods is part of a partnership selling the colt.

Of the youngster's bullet work, Woods said, “I knew he was a good horse, but I didn't think he would have quite that much speed because he's so big–he's close to 17 hands. But he galloped out in :44 3/5, :58 3/5. He just looked like he was galloping and did it so easy.”

After Thursday's breeze, there was some speculation that the colt had set a record for a 2-year-old over the OBS synthetic surface, but Woods knew that wasn't quite so. Four years ago, Woods sent a Scat Daddy filly (hip 1025) out to work three furlongs in :32 2/5. That filly, who RNA'd at the 2014 June sale for $975,000, was subsequent Grade I winner Celestine.

“When I went up to the office, they said, 'We're looking it up. We think that's a record for a 2-year-old,'” Woods recalled. “I said, 'It's not because Celestine worked :32 2/5.' She was obviously a very classy filly, too, and I don't remember exactly what she galloped out in, but I feel like this colt galloped out stronger than she did. I seriously think he could be top of the top horses.”

While the vast majority of the horses working this week in Ocala drilled in one or two furlongs, Woods sent  three of the 12 2-year-olds to work three furlongs.

“I tend to do it a lot because my view is that it's June and they've already run a bunch of [2-year-old] races,” Woods said of the three-furlong works. “I think horses, if they are up to it, they should be breezing three-eighths by the time they come here.”

Woods also had an unraced 3-year-old gelding by Jimmy Creed (hip 853) who was the only horse at the under-tack show to work four furlongs (:45 1/5).

“I just think it helps sell them if they are a little further ahead and they are gate-carded when they come here,” Woods said. “The Uncle Mo isn't gate-carded, but I have broken him at the gate. He's just a star. Whatever you want him to do, he'll do.”

The OBS June sale begins Wednesday and continues through Friday with sessions commencing daily at 10 a.m.