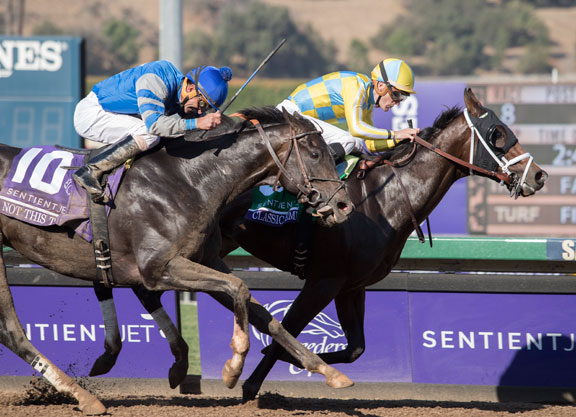 The hits just keep on coming for trainer Mark Casse. An eight-time Sovereign Award-winning trainer in Canada and an inductee into the country’s racing hall of fame in 2016, the 55-year-old horseman trained a pair of champions south of the border last year and was, for the first time, among the finalists for America’s champion trainer. One mountain Team Casse has yet to climb is Classic success, a trend they will hope to change with Eclipse Award winner Classic Empire (Pioneerof the Nile), who kicks off his sophomore campaign in Saturday’s GII Lambholm South Holy Bull S. at Gulfstream Park.

If recent history is any guide, the task ahead of the $475,000 Keeneland September graduate may be easier than it appears on paper. Since the Holy Bull was lengthened back out to a two-turn 8 1/2-furlong trip, none of the winners in the last four renewals has prevailed by fewer than two lengths, the margin of victory in 2013 when Itsmyluckyday (Lawyer Ron) handed the previous year’s champion Shanghai Bobby (Harlan’s Holiday) the first defeat of his career. Since then, favorites Cairo Prince (Pioneerof the Nile) and Upstart (Flatter) prevailed by better than five lengths, while Mohaymen (Tapit) validated odds of 30 cents on the dollar to post a comfortable victory 12 months ago.

The clear standout of this field on class, there are theoretically few straws in Classic Empire’s path Saturday afternoon as he takes his first steps towards the first Saturday in May.

But while owner John Oxley has been down this road before, courtesy of 2001 GI Kentucky Derby hero Monarchos (Maria’s Mon), Casse is still in search of that elusive first victory in the Run for the Roses, having started just three horses–two of which (Prospective and Danzig Moon) came for Oxley. Casse is focusing on the task at hand, or at least attempting to.

“I’ve kind of tried to block that out of my mind and not worry about it,” he said of any pressure having the ante-post Derby favorite in his care. “Thankfully, we’ve had so much going on that I haven’t had much time to think about it. Right now, we’re just concentrating on the Holy Bull. “It’s one step at a time.”

Remarkably, the connections of eight other freshly minted sophomores have decided to take on Classic Empire, and Gunnevera, a son of 2016 champion freshman sire Dialed In, would appear the only one to be able to warm up the favorite. His body of work at two was admirable, having shipped to Saratoga to post a 9-1 upset of the GII Saratoga Special S. last summer before posting a visually impressive success in the GIII Delta Downs Jackpot S. to end the season. Those efforts came either side of a better-than-it-looked fifth to Classic Empire in the GI Claiborne Breeders’ Futurity at Keeneland, though in must be noted that the winner covered significantly more ground.

“Gunnevera is a special horse,” his trainer Antonio Sano said. “He’s done everything I’ve wanted him to do. He’s 100% in condition. The race isn’t going to be easy, but I think he can win the race.”

Of the remainder, a pair of unbeaten ‘TDN Rising Stars’ merit a look. New Jersey-bred Irish War Cry (Curlin) is perfect in two tries, including a nose success in the seven-furlong Marylander S. at Laurel on New Year’s Eve, and is bred nicely for this added distance. Fact Finding (The Factor) is three-for-three thus far and exits a seven-length romp in the Dec. 10 Smooth Air S.