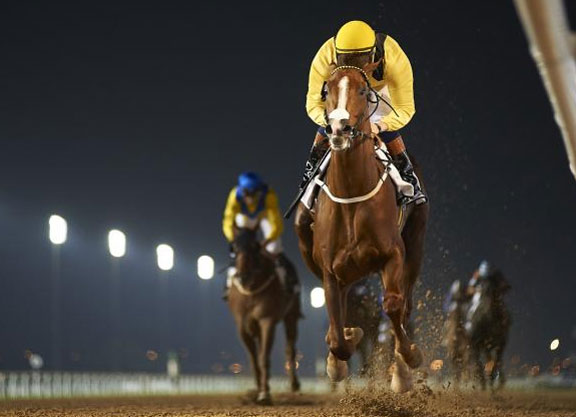 Market Rally may have put on a show playing up behind the gates before the UAE 2000 Guineas, but once the latch sprang, the chestnut was all business, wiring the field to win as he pleased. A 4 1/2-length maiden winner going a mile at Monmouth Park in August for Gary and Mary West and trainer Wayne Catalano in his lone juvenile outing, Market Rally was fourth for his new connections when resurfacing Jan. 14 in the UAE 2000 Guineas trial. Jumping smartly Thursday, Market Rally was about a length the better of Rouleau down the backstretch, with Lazzam hugging the rail and Rouleau's fellow Godolphin colorbearer, the trial winner Steady Pace, a length off him. While it became apparent rounding the turn that the Godolphin pair were already in trouble, Market Rally was still traveling sweetly and, with a few encouraging slaps from rider Chris Hayes, he drew clear to win wrapped up in the final furlong. “Making the running was not actually the plan,” Hayes revealed. “He was fractious in the stalls though and I was worried we might miss the break and did not want that to happen. I was always going well out in front and he ran on strongly all the way to the line. The 1900 metre trip of the [Listed] Al Bastakiya [Mar. 5] and the [G2] UAE Derby [Mar. 26] will really suit him.”

Market Rally's dam has a yearling colt by Sky Mesa and was bred to Verrazano for 2016.