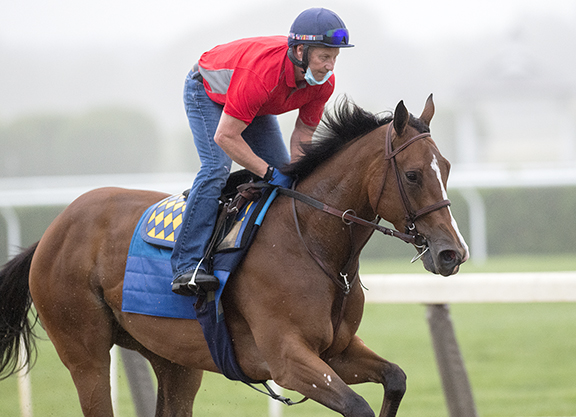 Unbeaten 'TDN Rising Star' Gamine (Into Mischief) will look to take her record to a perfect three-for-three while making her stakes debut in the GI Longines Acorn S. at Belmont Park Saturday.

The highly regarded $1.8-million Fasig-Tipton Midlantic 2-year-old sale topper debuted with the easiest of victories as the 1-9 favorite sprinting at Santa Anita Mar. 7, then gamely held off the hard-knocking subsequent GII Santa Oaks runner-up Speech (Mr Speaker) by a neck in front-running fashion in her two-turn debut in an optional claimer at Oaklawn May 2. The even-money morning-line favorite will be on the engine from her rail draw with Hall of Famer Johnny Velazquez in the irons.

“We took our time with her, let her develop,” Hall of Fame trainer Bob Baffert said of the Michael Lund Petersen colorbearer. “Her two races have been really nice races. I could have stayed home and run her here two turns in the [Santa Anita] Oaks, but I wanted to give her a couple extra weeks. I thought the Acorn with the bigger, wider turns, I think she'll like that. And it's a lot of prestige.”

“She's been ready to run for about three months,” newly minted Hall of Fame trainer Mark Casse said. “She's always been very, very professional. If anything, she's a little better work horse than she was. Last year, if you wanted to give some confidence to another horse you'd just work them with her because she'd let anybody beat her–except when they run in the afternoon. This year and recently, she's been a little more aggressive in her works.”

The lightly raced and unbeaten Casual (Curlin) paired up 90 Beyer Speed Figures in a pair of hard-fought tallies, including an optional claimer going seven furlongs at Churchill Downs last time May 22. She makes her stakes debut for Hall of Famer Steve Asmussen here.