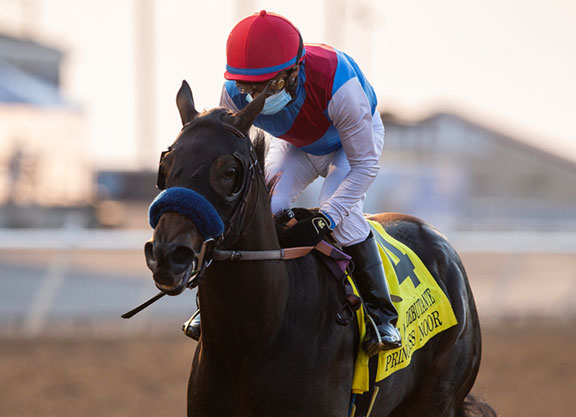 Unbeaten 'TDN Rising Star' Princess Noor (Not This Time) looks to punch her ticket to the GI Breeders' Cup Juvenile Fillies in Saturday's 'Win and You're In' GII Chandelier S. at Santa Anita.

After topping the Ocala Breeders' Sales Company's Spring Sale of 2-Year-Olds in Training at $1.35 million, she ran to the billing with a 'Rising Star' performance on debut for Hall of Famer Bob Baffert at Del Mar Aug. 22, then added a facile win in the seven-furlong GI Del Mar Debutante S. last time Sept. 6.

The Zedan Racing Stables colorbearer fired a five-furlong bullet in 1:00 1/5 (1/47) at Santa Anita Sept. 21 for this first two-turn test.

“She's fast; she's shown brilliant speed,” Baffert said. “She's coming back a little quick, but she's been handling everything we've thrown at her, so we're looking forward to the race.”

Empire-bred Make Mischief (Into Mischief) makes the trip from New York for trainer Mark Casse after three straight runner-up finishes versus stakes company going one turn, most recently completing the exacta versus state-breds in the Seeking the Ante S. at Saratoga Sept. 4.

Miss Costa Rica (Hit It a Bomb) switches to dirt after a visually impressive debut score sprinting on the Del Mar lawn Aug. 28.