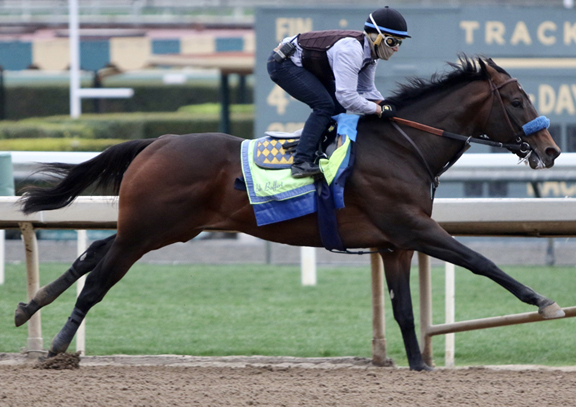 Unbeaten star 3-year-old 'TDN Rising Star' Life Is Good (Into Mischief) came out of a workout Saturday at Santa Anita with what appears to be a minor problem, one that will keep him from starting in the GI Runhappy Santa Anita Derby.

According to Hall of Fame trainer Bob Baffert, the horse was off in his left hind leg.

Baffert said it was too early to tell if Life Is Good could still make the GI Kentucky Derby. But Elliott Walden, the president and CEO of WinStar Farm, the co-owners of the horse, told horseracingnation.com that Life Is Good would be “out for a few months.” If that turns out to be the case, he will not make the Derby. In the last round of betting in the Derby Future wager, Life Is Good was the 2-1 favorite.

Life Is Good worked six furlongs in a bullet 1:11.40 Saturday. Initially, Baffert was pleased with what he saw.

“He breezed really well,” he said. “Cooling out, we noticed the problem. Something is going on. It's nothing obvious. It's not that he's lame. He just isn't 100%.”

Baffert said the recent runaway winner of the GII San Felipe S. may be sent to Dr. Larry Bramlage for tests.

“The timing is bad,” Baffert said. “It's disappointing and frustrating. He is such a brilliant horse. At least this is not something that should be career ending.”

While Baffert may not be able to run what is considered his best 3-year-old in the Derby, he has a powerful bench. He has four other horses that have enough points at this juncture to make the Derby.