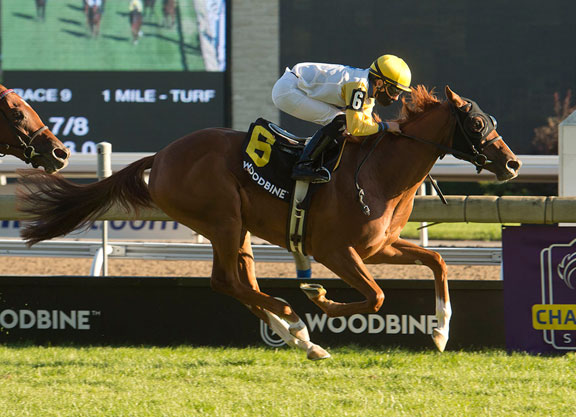 'TDN Rising Star' Lady Speightspeare (Speightstown), three-for-three on turf to start her career, will try all-weather racing for the first time Saturday at Woodbine, going seven furlongs on the Tapeta in the GII Bessarabian S.

A sharp 3 3/4-length frontrunning winner debuting on the local turf last August to earn her 'Rising Star' badge, the Chuck Fipke homebred quickly backed up that distinction with a score in the GI Natalma S. The chestnut was sidelined for nearly a year after that, however, before returning with an optional claiming success in a turf route here Sept. 6. She recently was scratched out of the GIII Rubicon Valley View S. at Keeneland in favor of this spot.

The favorite on the morning line at 2-1 is Gary Barber's Our Secret Agent (Secret Circle), who looks for her second straight graded stakes tally. Breaking her maiden by seven lengths in her local bow last July, she repeated in an allowance a month later, but went winless in her next seven outings while placing in six black-type events. She broke through with the addition of blinkers last out in Woodbine's GIII Hendrie S. Oct. 23, running away to a 3 1/2-length triumph.

Other contenders include Gidgetta (Fast Anna), who moved from Richard Baltas's barn to the Josie Carroll stable following a fast-closing optional claiming win in a Santa Anita turf sprint Oct. 8, and Aug Lutes (Midnight Lute), who's notched four wins and a second in five starts to open her career and upset the Glen Cove S. at 19-1 on the Belmont lawn Oct. 15.