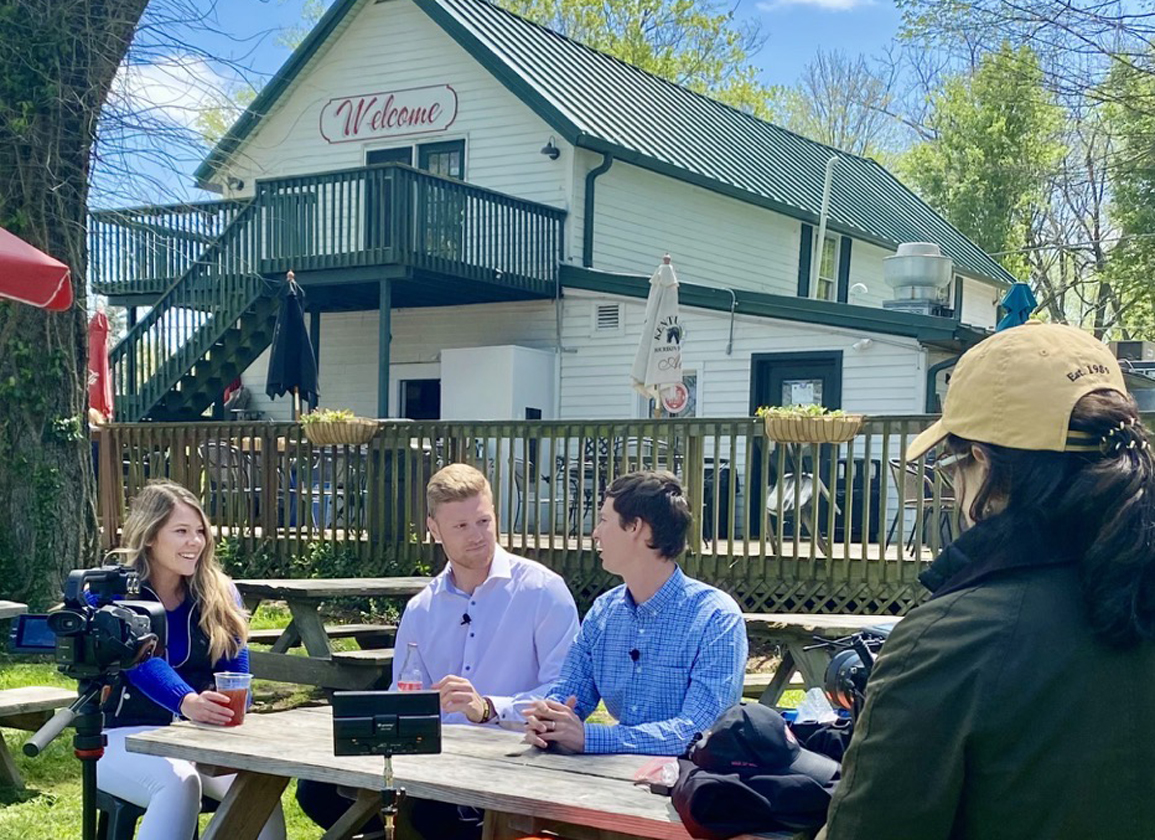 Will Levis and Walker Hancock join the first episode of Catching Up with Katie.

In the first episode of the TDN's new video series 'Catching Up with Katie,' host Katie Petrunyak sat down with the University of Kentucky's starting quarterback Will Levis and Claiborne Farm's Walker Hancock at Wallace Station Deli and Bakery outside of Lexington to discuss the N.I.L. (Name, Image, and Likeness) deal between Levis and Claiborne stallion War of Will (War Front).

The partnership was announced early last month and is the first of its kind for any collegiate student-athlete with a Thoroughbred syndicate.

“The reaction that we have gotten has been incredible,” Hancock shared. “The Tweet that we sent out has over 500,000 impressions, so it literally went viral. It was cool to see other outlets that aren't necessarily in the horse industry pick it up. We are always trying to find new fans and when we can cross sports like this, getting football fans focused on racing and racing fans watching football, it works out really well for both sports. It has been a perfect synergy of our brands with what we are looking to do.”

Set to take the field this fall for his second season as QB for the Wildcats, Levis talked about the opportunities this deal has provided not only for himself and War of Will, but for the Thoroughbred industry at large.

“[Horse racing] is so pertinent to Kentucky's economic success,” he said. “To bring eyes to the industry and to the people that are a part of it has been really cool. You're getting not only the eyes of people in the horse industry and Kentucky football fans, you're expanding the possibilities for fans from brand new demographics because of the uniqueness of the deal and the amount of people that picked up on it. Regardless of if you have interest in horse racing or football, it's still a cool story to read about.”

Levis, who threw for 2,826 passing yards and 24 touchdowns last year to lead UK to one of its most successful seasons on record, has quickly developed an interest in, and perhaps even a bit of a passion for, the sport of horse racing since his move to Lexington. He has already made several visits to Keeneland and this year, attended his first Kentucky Derby.

Asked if he had any desire to someday get further involved in the industry, Will responded enthusiastically. “100%. It's definitely something I want to keep myself involved in one way or another. I still have a lot to learn and I still have just a very surface-level knowledge of the sport, but I'm going to keep dipping my feet in and learning as much about it as I can because it's so interesting. There's a lot of money in it too, and that's not the main reason behind my interest, but while I'm here I have to take advantage of it.”

Later in the conversation, Hancock shared how he envisions the future of other stud farms potentially partnering with athletes in the N.I.L. space, and both Levis and Hancock discussed how each of their family legacies played a roll in building their own success.

Watch this first episode of Catching Up with Katie on YouTube or on TDNTv.

This story was posted in Top News and tagged Catching Up with Katie, Claiborne Farm, football, Katie Petrunyak, NIL deal, University of Kentucky, Walker Hancock, War of Will, Will Levis.