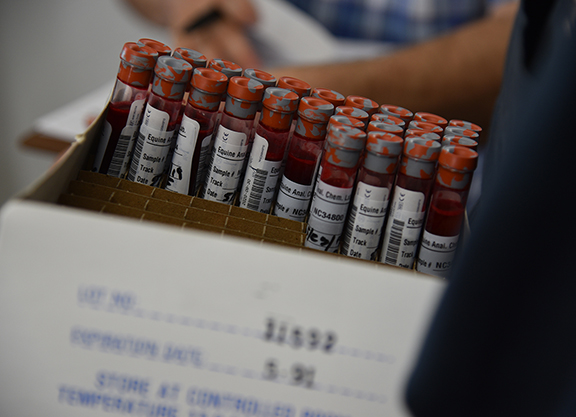 The Gluck Equine Research Foundation at the University of Kentucky is developing an equine biological passport with the goal of identifying specific biomarkers that will detect drug use by monitoring changes to peptides and protein abundance, and monitor those biomarkers over time, they announced Monday via press release.

In simple terms, an EBP would track biological changes in horses over time. Just like the one introduced by the World Anti-Doping Agency in 2009, an equine biological passport would use repeated blood samplings and use biomarkers to detect a horse's reaction to performance-enhancing drugs as an alternative to traditional testing.

“The goals of this program are to elevate equine research at the University of Kentucky, to serve as a platform to impact policy change and drug testing protocol, and further understand the impact of drugs and medications on Thoroughbred racehorses,” said the release.

“In the last few years we have seen too many negative headlines around equine drug use,” said Stanley. “As a research scientist, with 30 years of regulatory drug testing experience, my team and I know this is a problem we cannot currently solve. We know that it takes time to develop new tests for each new emerging drug, so we will always be behind. We know that each horse metabolizes drugs at a different rate, making standard clearance and withdrawal times confusing. In addition, we know that there are environmental factors, human interactions, and hundreds of other variables that can impact our current drug testing procedures. The EBP program is a tool that will enable us to rapidly identify new drugs and measure the physiological effect on the equine athlete. These data will be critical in differentiating between intentional doping and accidental contaminants, which can smear the industry image and damage reputations.”

Stonestreet Farm announced they would be major participants in the funding of the program.

“At Stonestreet. we are proud of our integrity, our commitment to a level playing field and our focus on the health of the horse above all else,” said Stonestreet's owner, Barbara Banke “An equine biological passport will give us a comprehensive program that provides full transparency for both competition and out-of-competition testing, for every stakeholder. Stonestreet will contribute $100,000 toward this project and I encourage all stakeholders, trainers and owners alike, to consider a tax-deductible gift as an investment in the future of the racing industry.”

The Equine Biological Passport program is an evolving research program, which is designed to expand and to be flexible enough to address new challenges, such as bio-therapeutics. Over the next several years, Gluck said they would continue to validate and refine the EBP program to position it as a future tool for the industry. In addition, it will provide scientific data needed to support changes in rules, and regulations that will allow us to prosecute violators and prevent `at risk' horses from entering in competitions.

The Jockey Club has also thrown their financial support behind the project. “As part of our mission, The Jockey Club seeks new practices and methods to ensure a level playing field and often look for solutions that may have had success in human sports,” said Matt Iuliano, the Jockey Club's Executive Vice President and Executive Director, who said they had been financially supporting Stanley's EBP research for four years. “As such, The Jockey Club has a continuing effort to support research aimed at developing an equine biological passport. The EBP employs new analytical methods to detect the administration of substances that evade traditional drug testing testing. Because these substances cannot be directly tested, they pose a significant risk to health, safety and integrity in our sport. The EBP looks for changes in bio markers which signal when a substance was administered. The EBP is a huge step in rooting out cheaters.”

Gluck's efforts would not be the first time the concept of a biological passport has been raised in racing.

The TDN's T.D. Thornton has written several articles about the concept and the need for funding, including this effort at UC Davis in 2016. Stanley headed up that effort and brought his work with him to UK when he moved there in 2019.

“What we budgeted was $250,000 a year for five years to move it forward,” said Stanley. “That pays for personnel, development, computer time, and the data analysis that we need.”

For more information about this project, visit http://gluck.ca.uky.edu/content/equinebiological-passport, or contact Dr. Scott Stanley at [email protected] or 859.494.6319. Funding for this project is entirely dependent on private support. For more information on how to support this effort or to make a gift, contact Danielle Jostes at [email protected] or 502.641.6906.