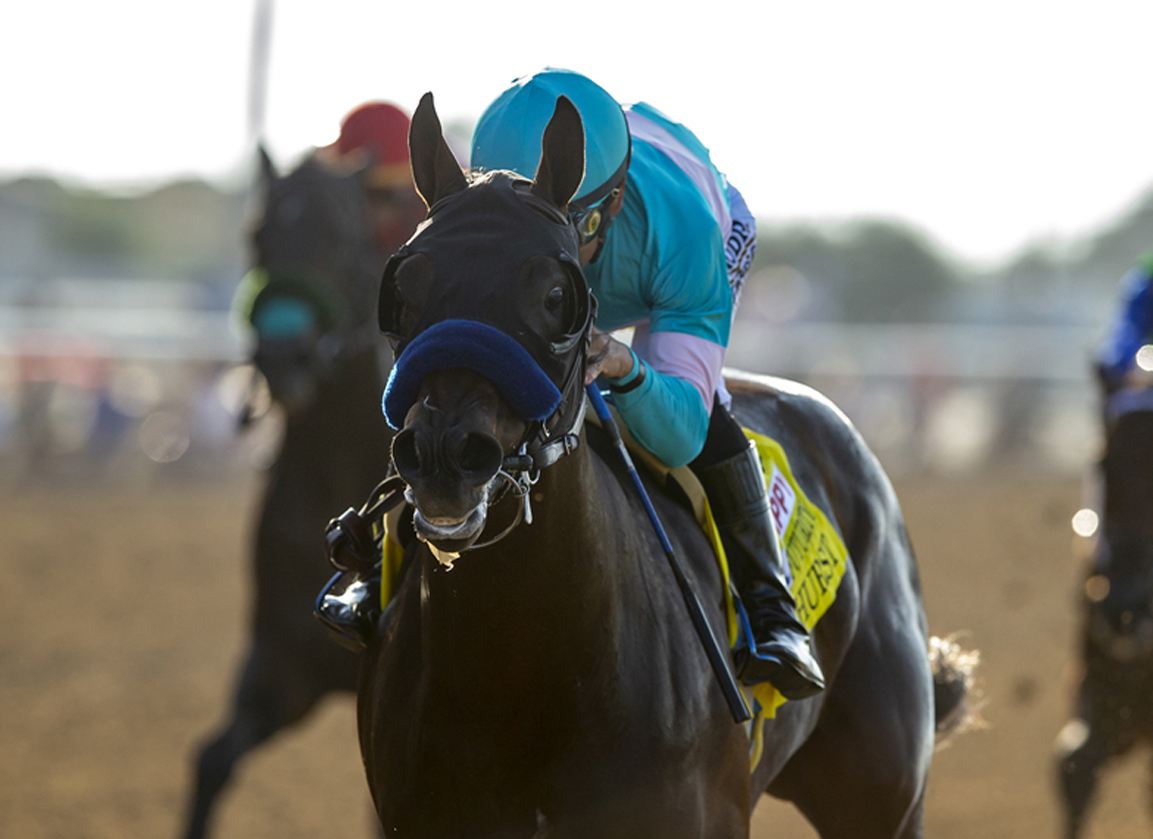 Bob Baffert's odds-on favorite in Monday's GI Runhappy Del Mar Futurity did little running, but it was no matter, as Baffert's 'other' colt, Pinehurst (Twirling Candy), picked up the slack and ran away from his foes to give Baffert an incredible 15th victory in the seaside oval's annual closing day feature.

Gutting out a hard-fought debut victory as a 17-10 chalk going five furlongs on this track Aug. 1, the $385,000 Keeneland September buy was made a distant second choice despite owning the best Beyer figure in the field as all the money poured in on Murray (Street Sense). Assuming command early with no riders showing much appetite for using their mounts' speed, Pinehurst dictated terms through a :22.09 quarter while just lightly pressed by the favorite as the other two single-digit odds horses, Pappacap (Gun Runner) and American Xperiment (Nyqust), comprised the third flight.

Murray came under the gun fairly early on the turn and was pushed along through a :44.77 half while making no dent on the leader's margin. Shifting out one path at the top of the lane, Pinehurst left the rail open for Pappcap, but that rival could not quicken with him as the leader drew away into mid-stretch. Longshot Finneus (Stay Thirsty) rallied down the center of the track to get into second, but was never within shouting distance of Pinehurst, who came home comfortably in charge under Mike Smith, remarkably winning the Del Mar Futurity for the first time. American Xperiment edged out Pappcap for third, with Murray checking in a dull fifth.

“I could see that Murray didn't have it today. He was struggling early on. I'm just glad that I had two good horses and one of them had it even if the other one didn't,” said Baffert. “I've been blessed over the years with so many good owners and so many good young horses. Mike Smith broke his maiden, so it was natural to have him back. He's a great rider and you give him a live one he knows what to do.”

“When we ran last time, he stumbed pretty badly coming out of there, but he still made the lead. So I knew he was plenty quick,” added Smith. “We beat a horse that day named Enbarr and I knew they were real high on him. So I figured I was sitting on a good horse. When you ride for Bob, you ride with confidence. He puts so much foundation under them and they all come running. So glad I got to win a stakes at Del Mar; and best to do it with a Grade I.”