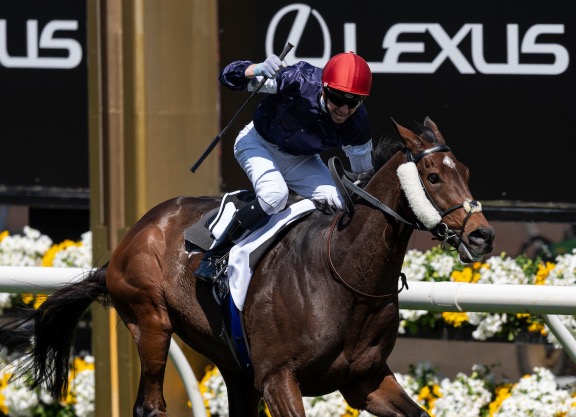 It was a clean sweep of the top three places for European raiders and, in an echo of 2017 when Rekindling (GB) (High Chaparral {Ire}) held off Johannes Vermeer (Ire) (Galileo {Ire}), O'Brien's father Aidan had to settle for second best when Irish Derby runner-up Tiger Moth (Ire) (Galileo {Ire}) ran home strongly to be runner-up on just the fifth start of his life. Finishing strongest of all, however, was the Charlie Fellowes-trained Prince Of Arran (GB) (Shirocco {Ger}), who claimed a spot in the Melbourne Cup top three for the third year in a row.

In front of deserted stands at Flemington, Twilight Payment was instantly prominent from stall 12, and by the time the field passed the post for the first time he had taken up the running with Tiger Moth tucked in his wake. Given an easy lead, the 7-year-old was joined by the long-striding Finche (GB) (Frankel {GB}) in the back stretch and the pair started to draw farther clear on the home turn as a stacked chasing pack jostled for position. With Finche weakening in the straight, Twilight Payment maintained his authority as Tiger Moth laid down his own challenge followed by the Cox Plate winner Sir Dragonet (Ire) (Camelot {GB}) and eventual fourth-place finisher The Chosen One (NZ) (Savabeel {NZ}). Only Prince Of Arran, trapped behind a wall of horses turning into the straight, made any real late headway with his thrusting late charge to finish less than a length off the winner, a performance which must have have been as heartening as it was frustrating for his connections.

While 3-year-old Tiger Moth justified his huge support going into the race to hold on for second, there was a dreadful postscript to the 160th Melbourne Cup as his stable-mate and last year's Derby winner Anthony Van Dyck (Ire) (Galileo {Ire}) fractured his fetlock less than two furlongs from home and was subsequently euthanised.

Speaking live on At The Races from Ireland, the former Irish champion jockey Joseph O'Brien was quick to praise Jye McNeil, who made his first ride in the Melbourne Cup a winning one. He said, “Jye gave the horse a fantastic ride and all credit goes to Mark Power and to Sean Corby, who looks after Twilight Payment, and the team of lads we have had down in Australia for the last month or so. This is the icing on the cake for them.”

Bred and originally trained by Jim Bolger, Twilight Payment won his first five races in the colours of Jackie Bolger and joined O'Brien's team last July after being bought by Lloyd and Nick Williams. He made his first trip to Australia shortly after that and finished 11th in last year's race. During a fruitful summer of 2020, he won the G2 Curragh Cup for the second year running and, fittingly, the G3 Vintage Crop S.

O'Brien continued, “This was the first year I've had a full preparation with him—he came to us halfway through last season—and his form was good all through the summer. He ran a couple of huge races at the Curragh. I thought he might have been given a little bit more pressure for the lead, but the horse has incredible heart and he just kept running all the way to the line. He has an incredible will to win.”

The 27-year-old trainer landed his first Melbourne Cup in 2017 in his second season of training. He subsequently won the Irish Derby with Latrobe (Ire) (Camelot {GB}), who is also owned by the Williams team, and recorded a first success at last year's Breeders' Cup with Iridessa (Ire) (Ruler Of The World {Ire}). This season he also claimed his first British Classic success when Galileo Chrome (Ire) (Australia {GB}) won the St Leger.

He added, “I can't thank Lloyd and Nick Williams enough for everything they do for me. It's a fantastic result for them also. I'm hugely privileged to train for the people I train for and to have the horses that I have. It's a tough game, as everybody knows, and there's a fine line between the top and the bottom.”

Jye McNeil said that his Melbourne Cup debut left him “overwhelmed with emotion”.

The 25-year-old added, “Joseph wanted me to be a step ahead of the field and really get them chasing. I encouraged [Twilight Payment] to go forward, that was the plan. Then he just found such a lovely tempo at the top. It was just a matter of amping the rhythm up at just the right stage and I'm glad it all worked out.”

The travel and quarantine restrictions that have added extra complications to international racing this year meant that Charlie Fellowes was also watching from afar at his home in Newmarket. As ever, he was full of praise for his stable star Prince Of Arran. He said, “The last two years I've felt that we've been beaten absolutely fair and square so you can only come away feeling proud of what the horse has achieved. This year, not taking anything away from the winner or the second, but I just feel that the trip we had, especially coming round the bend, being pushed wide and not getting quite the clearest run in the world, maybe he might just have got there, but it's unfair to say that. I just felt that this was possibly his year.”

Fellowes continued, “He's done so well and he's the most incredible horse. I'm incredibly lucky to have a horse like him and I will never have one like him ever again. He looks after himself and always has done, which is I guess why he's running at such a high level still at the age of seven. He just needs to look after himself for a year or two more and maybe we'll go out there again next year. He's a really intelligent horse and he's always very interested in what's going on around him, but he's also a cool customer and very relaxed. I think the hotter conditions and the faster track played to his favour today because he loves those conditions and he handles them better than a lot of other horses do.

“He's a wonderful horse and the key now is to make sure we enjoy him and that he's able to race but that we don't put the horse's wellbeing at risk. That's the important thing.”

Pedigree notes
Twilight Payment was the second foal of the Oasis Dream (GB) mare Dream On Buddy (Ire), who won twice over a mile on the all-weather for the late John Hills and is a half-sister to the Jim Bolger-trained dual Group 2 winner and Irish Oaks runner-up Banimpire (Ire) (Holy Roman Emperor {Ire}). The siblings were bred by Pat O'Kelly's Kilcarn Stud. At the end of Banimpire's Classic season of 2011, Bolger bought her year-older half-sister for 240,000gns.

Now a seven-time winner, Twilight Payment is her sole winner but his half-sister Bandiuc Eile (Ire) (New Approach {Ire}) earned black type when second in the G2 Debutante S. behind Skitter Scatter (Scat Daddy) in 2018. Now in foal for the first time to Profitable (Ire), Bandiuc Eile is entered as lot 1618 in the Tattersalls December Mares' Sale.

A third Group 1 winner for Bolger as breeder within a fortnight following the victories of juveniles Mac Swiney (Ire) (New Approach {Ire}) and Gear Up (Ire) (Teofilo {Ire}), Twilight Payment was the second Melbourne Cup winner for the former Bolger trainee Teofilo, who is also the sire of Godolphin's 2018 winner Cross Counter (Ire).