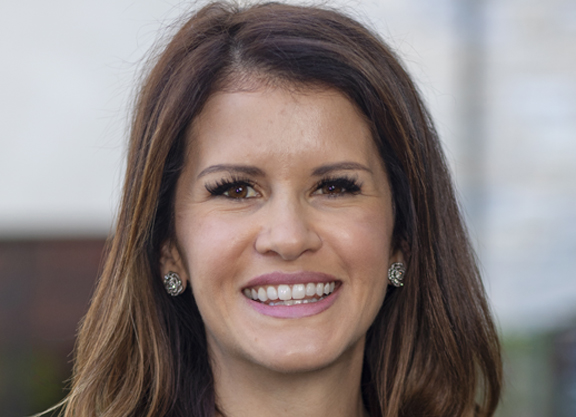 With active hands-on experience in two arenas in racing–television and presentation as well as horsemanship–Christina Blacker is one of a handful of people in the industry with that variety of perspective. Tuesday morning, the TVG reporter, analyst and host joined the TDN Writers' Room presented by Keeneland for an expansive discussion on growing the sport. Calling in via Zoom as the Green Group Guest of the Week, Blacker also talked about the triumph of her husband Dan's recent first Grade I winner as a trainer and her I Am Horse Racing initiative.

Reflecting on the top-level success of the Blacker barn's Hit the Road (More Than Ready) in the GI Frank E. Kilroe Mile S., Blacker said, “The challenging thing about training is that you can put in all the time, the blood, sweat and tears, but until you have a horse that really has some ability, I don't feel like a lot of trainers get the chance to show what they can do. I've always believed that Dan would be playing at this level, and that he had the horsemanship skills and the background and was putting in the effort and hard work to deserve this kind of success. But until a horse of this ability came along, he hasn't had the opportunity to show people how he can train and manage a good horse. I think one of the things I'm most proud of with the way Dan has campaigned [Hit the Road] is he pulled back and was patient when he needed to. Now I think you're really seeing that patience pay off. Hopefully his trajectory will continue to improve.”

Asked about the I Am Horse Racing project to educate the public about the sport's people and their care for horses, Blacker said, “The idea for it came from a group of women who are interested and all have investments in the game. We felt that a couple of years ago when the safety issues were so prevalent at Santa Anita, there was so much coverage, and in those reports was a real implication that people in horse racing don't love horses, don't care about horses, aren't treating these horses with the respect that they deserve. So we wanted to try to put something forward that was educational that was out there to say, 'We recognize that there's a problem, that safety needs to be addressed, but look at these thousands of people across the country who are dedicated to these horses.' We wanted people to know that from the top to the bottom, there are people invested in this game because their core passion is the animal.”

Elsewhere on the show, in the West Point Thoroughbreds news segment, hosts Joe Bianca, Bill Finley and Kelsey Riley criticized the lawsuit filed by some horsemen's groups to stop HISA and debated what its implications may be. Click here to watch the podcast; click here for the audio-only version.