Trueshan Wins The Goodwood Cup As Stradivarius Taken Out 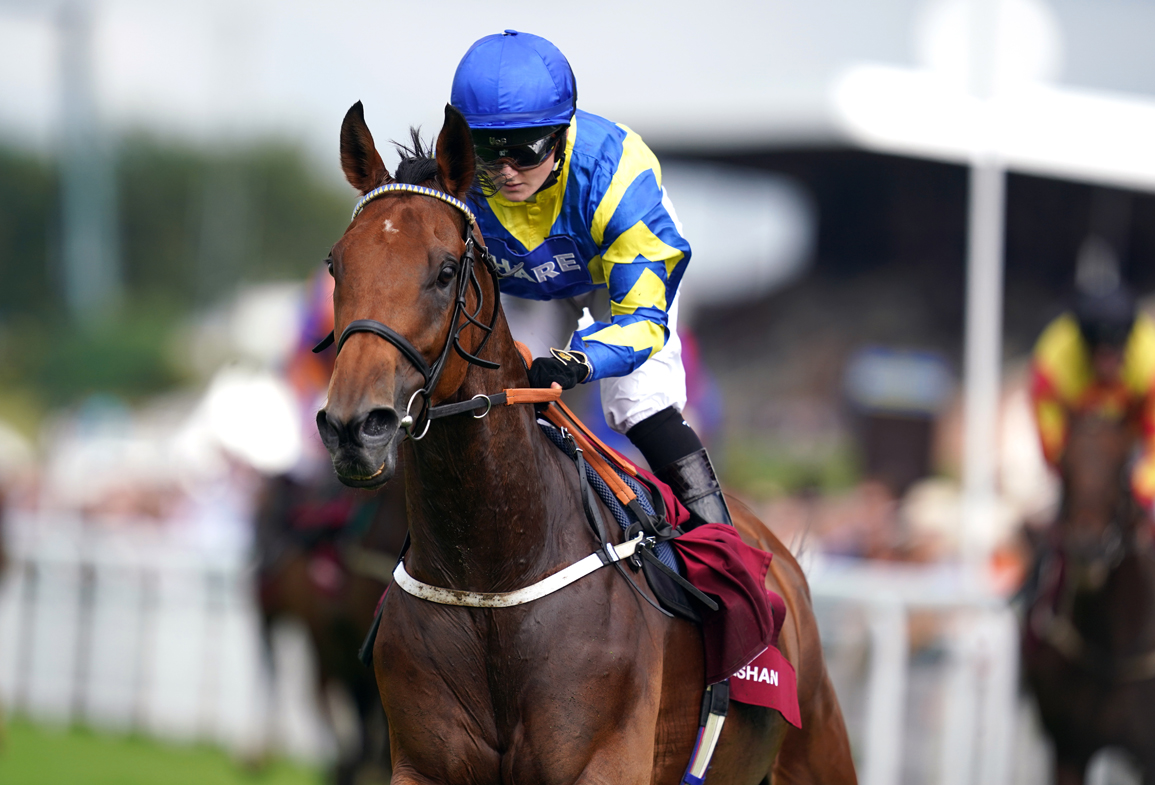 A G1 Al Shaqab Goodwood Cup without Stradivarius (Ire) (Sea the Stars {Ire}) meant that for the first time in five years it was heading elsewhere and Trueshan (Fr) (Planteur {Ire}) stepped forward to claim the title in the heavy conditions he relishes on Tuesday. As he proved when winning Ascot's G2 Qipco British Champions Long Distance Cup in October, the ground cannot be slow enough for the Alan King-trained 5-year-old and with the reigning champion taken out he traded as the 6-5 favourite. Always prominent under Hollie Doyle, the bay who was last seen finishing sixth as top weight in the Northumberland Plate H. over this two-mile trip on the Tapeta June 26 took over in early straight and powered clear late to score by 3 3/4 lengths from the 33-1 outsider Away He Goes (Ire) (Farhh {GB}). Sir Ron Priestley (GB) (Australia {GB}) was 1 1/2 lengths away in third before collapsing after the line and heading to the equine hospital for a scan. “I never really feel pressure, but today something did come over me as I didn't want to let everyone down,” the winning rider said. “I was very confident going into the race. I haven't had many experiences of Goodwood, let alone on a short-priced favourite. I was feeling it a bit more than normal, but Trueshan is an exceptionally talented animal on this ground.”

This renewal was diminished by the withdrawal of Stradivarius and of Spanish Mission (Noble Mission {GB}), but it is hard to argue that Trueshan would not have brushed aside those rivals as readily as he did the few that dared to stand against him on this ground. His 7 1/2-length defeat of Search For a Song (Ire) (Galileo {Ire}) in the Long Distance Cup meant that he had nothing to prove this term, but on his return he confirmed he was top-class by running second to Japan (GB) (Galileo {Ire}) under a five-pound penalty in the G3 Ormonde S. over an extended 13 furlongs at Chester May 6. Even his latest effort when on the premises under a welter burden in the Northumberland Plate marked him as a stayer of note and so this was mere confirmation that he represents a benchmark when the going rides as it did on Tuesday.

If anything tending to over-race early behind Amhran Na Bhfiann (Ire) (Galileo {Ire}) and Nayef Road (Ire) (Galileo {Ire}), the bay was sent up to shadow the latter as the Ballydoyle pace-setter gave way climbing the last part of the hill approaching six out. Getting to the stand's rail first as most of his rivals were visibly struggling in behind, Trueshan could have caved in as the smooth-travelling surprise package Away He Goes arrived on his outer but instead drew away to score with resounding authority. “He was pretty fresh early on, as they were going no gallop and so halfway round I managed to slide onto the girth of the others and he then settled,” Hollie Doyle added. “The further we went, the better he went. When I hit the rising ground, he's gone again.”

For Alan King, the win represented a breakthrough on the flat and he said, “It is a very special moment. I have been very calm all morning, then when John took out Stradivarius and we were shortening all the time, the nerves really started to kick in. I have not been this nervous for a long time. I have always enjoyed my Flat races and this is very special. This is up there with the Champion Hurdles. Trueshan can be a little keen, so I'm glad he had a proper race at Newcastle–he could have been ferocious today if he hadn't had that run.””We had to take him out of the Gold Cup, which is very hard to do, but he's very ground-dependant,” King continued. “He is in the [G2] Lonsdale [Cup at York Aug. 20] and he is in the [G1] Irish St Leger [at The Curragh Sept. 12]. I will talk to the boys, but we will probably take him out in the morning at the forfeit stage. The [G1 Prix du] Cadran [at ParisLongchamp Oct. 2] will probably be his big target in the autumn.”

Away He Goes' trainer Ismail Mohammed, who had won Saturday's G3 Princess Margaret S. with Zain Claudette (Ire) (No Nay Never), commented, “He ran super. He ran only 17 days ago and it was doubtful with the soft ground, because he has had problems with soft ground before. Group 1s are not easy and it is amazing for our group and our small stable. So far we have Groups 3s and we are moving steps forward.”

Stradivarius will instead wait for the Lonsdale Cup, with John Gosden saying, “Obviously we were very keen to do something that's never been done before, which is win five Goodwood Cups in a row. He's in great form, he's full of himself, ready to run. But I'm afraid you got 60mm of rain since mid-day Sunday and another bucketload last night. I walked the track out in the country with Thady and the stick is going straight into the bottom and it turns it into a bit of a two-mile slog. This is a horse who can travel with a great acceleration, turn of foot and put pretty amazing fractions to the last two or three furlongs, but he's not going to do it on that ground. I think at his age you've got to play to his strengths and also we made foolish decisions last year, one to run him at Longchamp on bottomless ground by the River Seine, which he loathed, and then even more stupid we ran on Champions Day on heavy ground at Ascot. Having made the mistake twice, we weren't quite prepared to do the same again.”