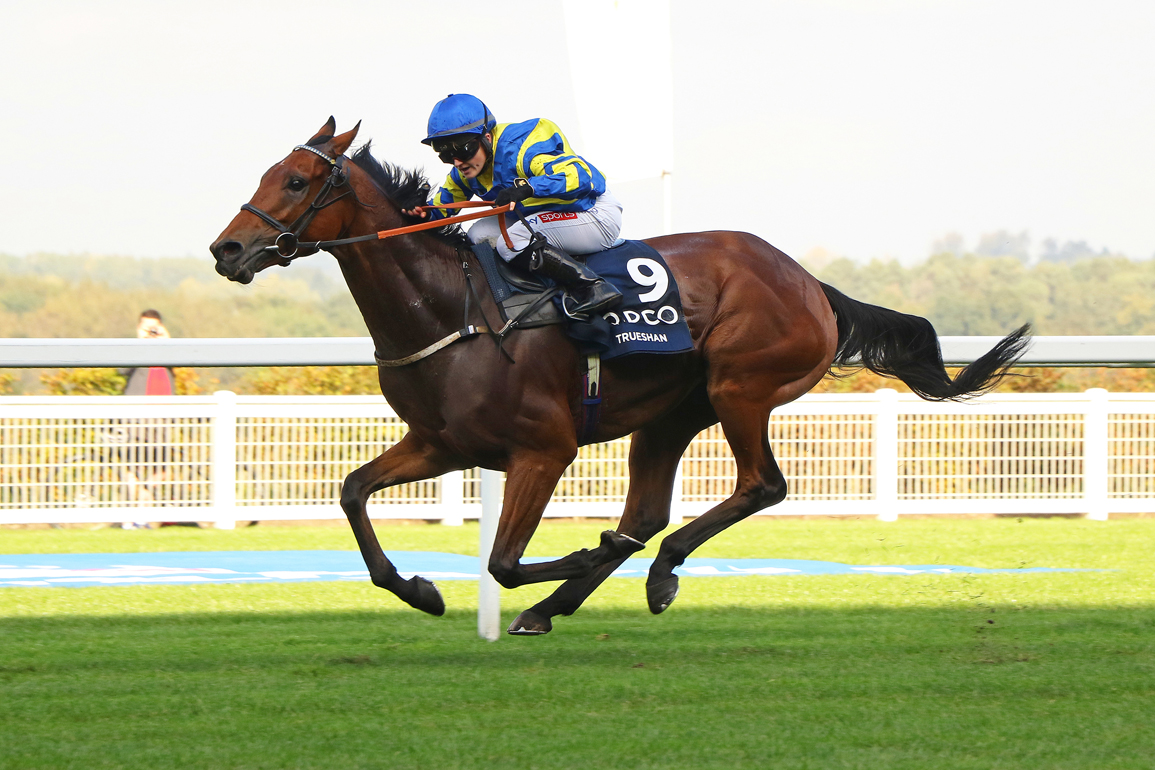 Adding to his fast-accumulating haul of big-race wins on Saturday, Trueshan (Fr) (Planteur {Ire}) justified even-money favouritism to bring up a repeat in Ascot's G2 QIPCO British Champions Long Distance Cup. While not as demonstrative as 12 months ago, when the deeper ground saw him excel with a 7 1/2-length success, the subsequent G1 Goodwood Cup and G1 Prix du Cadran hero had a tactical affair to deal with this time but Hollie Doyle refused to be flustered anchoring him in mid-division. Despite his early exuberance, the 5-year-old had plenty in reserve to make a wide move passing four out and was in front two furlongs later as Stradivarius (Ire) (Sea the Stars {Ire}) made his long bid for home out wide. In the end, it was the 50-1 outsider Tashkhan (Ire) (Born To Sea {Ire}) who gave best to the winner but at the line there was a 1 1/2-length margin between them, with Stradivarius flattening out late to be a further 2 1/2 lengths behind in third. “I don't think he was quite at his best,” trainer Alan King said of the winner. “He had to be really tough to battle it out and he just keeps finding. He was a handful to saddle and keen early, but it was only two weeks since he ran. It was a terrific performance and Stradivarius has run another mighty race.”

This was an unsatisfactory affair as far as a staying test goes, with Ballydoyle's The Mediterranean (Ire) (Galileo {Ire}) able to set a moderate tempo which played against the likes of Trueshan and Stradivarius, with the latter anchored in rear by Frankie Dettori and denied an easy wide passage by Dylan Browne McMonagle who wanted to stand his ground on Baron Samedi (GB) (Harbour Watch {Ire}). That the “big two” pulled clear of the remainder with Tashkhan in tow suggests that the rain shower that hit Ascot on the morning of racing had taken effect and the non-stayers were soon sifted out. Trueshan was on his mettle for most of the contest again, but he seems to have an unexpendable reserve of stamina and his extra power when Stradivarius got to within a length of him late ultimately told.

In some ways, the Trueshan that turned up in this 12 months ago was an open book moving up to two miles for the first time having won the 12-furlong Listed Tapster S. at Haydock last July and six of his first 10 starts. What came after was confirmation that staying was his game, but on his 2021 bow he had shown versatility back over middle distances when second to Japan (GB) (Galileo {Ire}) attempting to give him five pounds and in front of the eventual G1 Irish St Leger hero Sonnyboyliston (Ire) (Power {GB}) in the G3 Ormonde S. over an extended 13 furlongs at Chester May 6. Sixth carrying a stopping burden of 139 pounds in the Northumberland Plate H. over this two-mile trip on Newcastle's Tapeta June 26, he had taken full advantage of the heavy rain and subsequent absence of Stradivarius to land his first group 1 in the Goodwood Cup July 27. Stradivarius had been there at ParisLongchamp, but so had the soft ground Trueshan relishes and while this was not as testing the result was ultimately the same.

“It was a bit of a nightmare really,” Hollie Doyle explained. “He jumped nicely, I got a nice position early on and he switched off. At halfway he came to life, put the brakes on and raced rather keenly but that's just the way he is. I could feel Frankie breathing down my neck five down and I was wider than I wanted to be turning in, but I had to make my move. He's so brave, to back up like he's done today, it's just amazing. I would love to try and live the dream again next year and hopefully he'll be a stronger horse.”

King added, “Everyone has said I've been too cautious with this horse, but I've only taken this horse out when it has been rock-hard ground. I will run him on good ground, but not good-to-firm. Let's hope we get a wet Royal Ascot, as it would be lovely to run him in the Gold Cup. We'll duck and dive and if he keeps doing as well as he doing at the minute then we'll be happy.”

Tashkhan's trainer Brian Ellison said, “It was fantastic. Tashkhan is only three and has improved with every run this year. He has just run a blinder. Trueshan is a brilliant horse. We bought Tashkan to go jumping, but that is not happening and he'll run in all the best races next year.”

John Gosden said of Stradivarius, “It was a horrible trip. It all went wrong, but that is life and I don't want to go into any detail on it, but they rode to beat him a little bit. Stradivarius has run a great race, considering the ground. He could have done without it going softer this morning with another two and a half millimetres of rain. He seems fine after the race and no decision will be made on next year until next week. In other words, we want to see how the horse is in the next few days at home and he will tell us how to play it.” Frankie Dettori added, “It was a disgrace. The kid [Dylan Browne McMonagle on Baron Samedi] in front of me did everything possible to get me beat.”

Trueshan is out of Shao Line (Fr) (General Holme), who has five winners to her credit and hails from the G1 Derby Italiano hero Houmayoun (Fr) (Shernazar {Ire}) and the G1 Poule d'Essai des Pouliches winner Altissima (Klairon {Fr}).