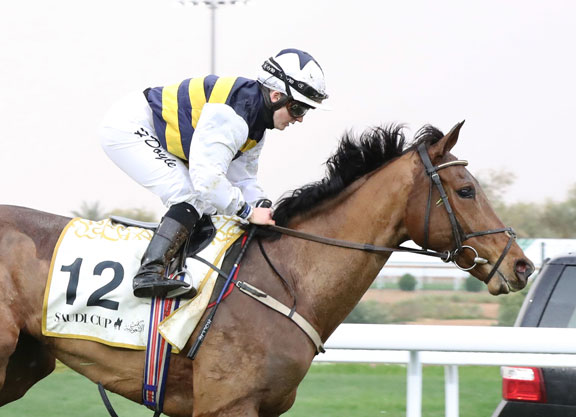 A winner over hurdles in Ireland, a multiple listed winner on the flat in the UK, a dual Group 3 winner in Australia and now a winner in Saudi Arabia: True Self (Ire) (Oscar {Ire}) has nearly done it all, and at age eight she appeared at the peak of her powers on Saturday when overhauling America's reigning champion turf horse Channel Maker (English Channel) in a beautifully executed ride by Hollie Doyle to win the $1-million Neom Turf Cup in Riyadh.

Dropping back to race midpack as the field passed the stands for the first time, True Self and Hollie Doyle bided their time patiently as For The Top (Arg) (Equal Stripes {Arg}), who was third in this race last year, carved out the pace with Channel Maker breathing down his neck. Channel Maker, under Joel Rosario, poked his head in front midway down the backstretch and he and For The Top raced in tandem around the second bend until Channel Maker made a decisive move to kick clear at the quarter pole. The American looked a likely winner for a few strides, but True Self soon loomed large down the middle of the track, lengthening and cutting into Channel Maker's lead with every stride as Channel Maker battled on running with his head held high. True Self cut her rival down inside the final furlong and won by a length and a quarter drawing away. The locally trained Emirates Knight (Ire) (Dark Angel {Ire}), a 50,000gns purchase from Roger Varian's stable from the Tattersalls Autumn Horses-in-Training Sale last year, was third.

“To be fair, I thought she was my best winning chance of the day,” said Hollie Doyle. “I watched all her performances and I thought she was well up to winning this. The step back in trip was an incredibly clever move by Mr Mullins. She's a strong traveller usually over further trips, and that helped her today. They went an even, generous gallop all the way round. We got racing quite soon so the race fell apart quite early, but luckily I managed to latch on to the back of Ryan Moore [on Tilsit] and I got the splits up the straight.”

Joining the Willie Mullins yard at four, True Self went unbeaten in her first three tries that season, going as far as two miles over hurdles. After plying away under those conditions through her 4-year-old campaign, True Self dropped down to 2800 metres to take the Listed Beckford S. at Bath and to 2000 metres to win the Listed James Seymour S. at Newmarket before seasons' end. She won the Listed Vintage Tipple S. the following spring before traveling to Australia to take the first of back-to-back editions of the 2600 metre G3 Queen Elizabeth S. during the Melbourne Cup Carnival at Flemington, with OTI Racing having bought into her ownership with the Three Mile House Partnership. She was sixth on this card last year in the 3000 metre Longines Turf H., this year known as the Red Sea Turf H. True Self was making her first start since the latest renewal of the Queen Elizabeth on Saturday.

Willie Mullins said after watching from his County Carlow base, “I'd like to congratulate Hollie on a fantastic ride. She's way more speed than we thought when we bought her as a bumper mare to go hurdling with. She just has a huge amount of speed. All the jockeys who have ridden her have said to me that a mile and a quarter suits her. I was happy enough with where Hollie had positioned herself and I imagine, without having talked to Hollie, that she was probably going as fast as she could over the first half of the race. Then, when the pace was injected as the American horse went up on the outside, I thought 'that's great, because they'll be coming back at the end.'

“Sure enough, that's what happened. Hollie just kept her head, kept the position we'd discussed–if we'd anything left in the tank we'd just wait and wait as long as she could. It looked like our mare just stayed on and on, while the one in front was just tying up.”

Mullins added, “We've had gale force winds here [in Ireland] and an inch of rain this morning, and I thought 'it'll be lovely over there.' But then I saw at the start you had lots of rain as well. So I thought 'that suits the mare–she'll feel more at home with that.'”

Looking to future targets for True Self, Mullins said, “We'll have a look; today's race and Australia at the end of this year in November, that's the main plan. So what we do in between times we haven't really thought about. The first part of the year's plan has worked out, and it will be probably on to Australia from here.”

True Self is the lone stakes horse for the unraced Mukaddamah mare Good Thought (Ire), who died in 2015. She is one of just two stakes horses, in fact, under her first three dams, the other being her third dam Enterprisor (Ire) (Artaius)'s half-sister Commanche Chief, a Grade II winner in the U.S.