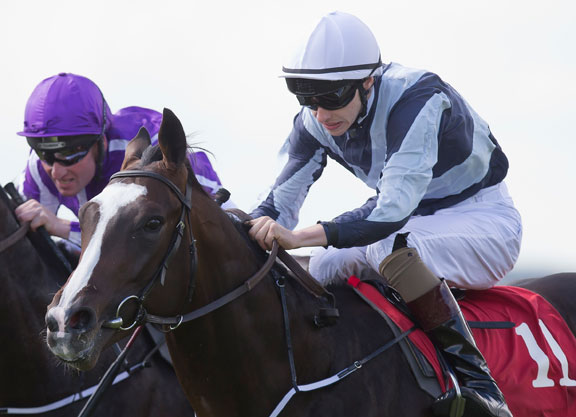 With seven renewals of the G1 Racing Post Trophy already to his name, Aidan O'Brien is the first port of call when it comes to the Doncaster feature, and the significant gamble that took place midweek on Yucatan (Ire) (Galileo {Ire}) tells its own story. With the Niarchos family's homebred son of the illustrious Six Perfections (Fr) (Celtic Swing {GB}) ousting stablemate Capri (Ire) (Galileo {Ire}) from the reckoning for Saturday's race, despite having finished second to him in the G2 Beresford S., the vibes from Ballydoyle are notable. Alan Cooper, racing manager for the Niarchos's Flaxman Stables, whose colours the dark bay sports, said, “Aidan O'Brien indicated that he would be one of several possible choices for the race and he has decided this is the next plan for him. I think he has grown up in each run to date. It is a step up in grade for him on Saturday, so let's see what happens.”

With one-twos in the G1 Cheveley Park S., G1 Fillies Mile and G1 Dewhurst S., it also pays to look to the other Rosegreen representatives, with the G2 Royal Lodge S. runner-up The Anvil (Ire) (Galileo {Ire}) holding significant claims of his own. Following his career-best in that Sept. 24 Newmarket contest, he ran third in the G3 Autumn S. back over that track's mile Oct. 8 and should get the fast pace he needs with the stable's Oct. 5 Navan maiden scorer Finn McCool (Ire) (Galileo {Ire}) a potential pacemaker.

The Starship Partnership's Rivet (Ire) (Fastnet Rock {Aus}) is the chief threat to the Irish contingent, having won the G2 Champagne S. at Doncaster Sept. 10 prior to finishing fifth in the G1 Dewhurst S. also over seven furlongs at Newmarket Oct. 8. Jockey Andrea Atzeni is in the unusual position of having ridden the last three winners–Kingston Hill (GB) (Mastercraftsman {Ire}), Elm Park (GB) (Phoenix Reach {Ire}) and Marcel (Ire) (Lawman {Fr})–and he is on board the colt who is highly regarded by trainer William Haggas, whose wife Maureen said, “Things didn't really go his way in the Dewhurst, but he came out of it well. The ground is still relatively dry, so while conditions are in his favour we thought we'd give it a go. He's won at Doncaster and it's a little bit more straightforward than Newmarket.”

Second in the G1 Prix Jean-Luc Lagardere under Maxime Guyon at Chantilly Oct. 2, Salouen (Ire) (Canford Cliffs {Ire}) is reunited with jockey Tom Marquand with trainer Sylvester Kirk believing that he was ridden from too far back on that occasion. “He's in good form at home, but you never know if it could be one run too many at this time of year,” he commented. “I was keen to take him to the Breeders' Cup, but his owner couldn't make that so we run here instead. This looks a tougher race but he's certainly not out of place, he proved that in France.” Marquand added, “He ran a massive race that day and ran on real well and finished the race better than he started it. You can't fault a thing he has done and he has a live chance if he takes another step forward.”

Interestingly, David Elsworth has opted to send Sir Dancealot (Ire) (Sir Prancealot {Ire}) up to a mile after his latest win in the six-furlong Listed Rockingham S. at York Oct. 8. “People have seen him run over seven furlongs and he just changed his legs a couple of times, so whether that is the limit of his stamina I don't know but this race is only 220 yards further,” he said. “He goes there in reasonable form and I'd be disappointed if he is not there or thereabouts. I've looked up the sire and he has had a winner over the trip.”