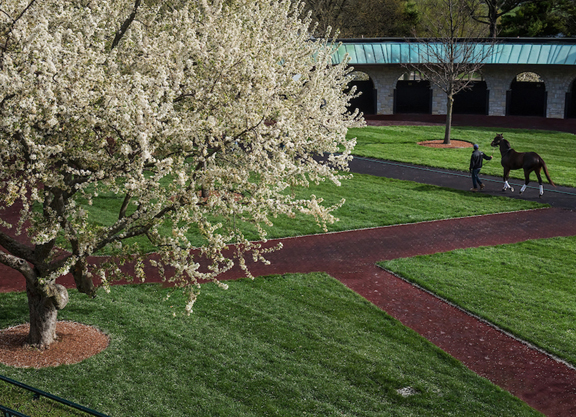 What a difference a year makes. Last March, when the coronavirus pandemic first descended upon America, the cancellation of sporting events left and right drove home, like few other signs did, how serious the situation was. In the racing world, there was arguably no greater loss of normalcy at that time than was felt when Keeneland was forced to scrap its iconic spring meet. And while races eventually returned to the central Kentucky oval, fans didn't for the entirety of 2020. Friday, the familiar sights of April in Lexington–the colorful trees, the lush green paddock and yes, even a limited number of excited racegoers–will all be back, serving as the backdrop for the highly-anticipated 2021 Keeneland Spring Meet, which kicks off with a card featuring three competitive stakes for 3-year-olds.

“The enthusiasm and loyalty of our fans are what make Keeneland so special,” Keeneland President and CEO Shannon Arvin said when the track announced the return of spectators. “We have missed their presence on race days and we are excited to welcome them, albeit in limited number, back to Keeneland. We appreciate the support of the Central Kentucky community this past year, and we hope this step is the first toward somewhat normal operations in the fall.”

In Friday's GIII Beaumont S., most of those fans' eyes will be on 'TDN Rising Star' Slumber Party (Malibu Moon) in a field of seven 3-year-old fillies going the famous Beard Course distance of seven furlongs and 184 feet on the main track. Unveiled for Kelly Breen Jan. 24 at Gulfstream, the Gary and Mary West homebred went to the front and made short work of her competition, cruising to a geared-down 7 1/2-length score.

Though brilliant in that effort, she is no cinch facing winners for the first time and three major contenders appear to stand most directly in her way. G. Watts Humphrey's Farsighted (Bernardini) notched a blowout maiden win of her own over this track last October and followed up with a solid second in the local Songbird S. A quick experiment to test her at two turns failed when she backed up to last in the GII Golden Rod S., but she was impressive when returned to sprinting last out, dominating the Any Limit S. by 4 1/4 lengths Mar. 6 at Gulfstream in her sophomore bow.

Three Chimneys Farm's homebred Twenty Carat (Into Mischief) looks loaded with potential as she makes her dirt debut. Disqualified out of a first-out maiden win Jan. 15 at Turfway, the Wesley Ward pupil left nothing to chance there Feb. 25, rolling home on her own power by 7 3/4 lengths. She has drilled sharply over the local main track, most recently going five furlongs in :59 4/5 (5/58) Mar. 27.

The lone graded stakes victress in the field, My Girl Red (Texas Red), makes her first start in nearly seven months. A convincing debut winner going 4 1/2 panels last June at Santa Anita, she repeated by 4 3/4 lengths in the GII Sorrento S. at Del Mar, but was last seen being pulled up in the GI Del Mar Debutante S.

In the day's other graded stakes, GI Breeders' Cup Juvenile Turf hero Fire At Will (Declaration of War) returns to the lawn as a likely favorite against five 3-year-old males going 1 1/16 miles in the GIII Kentucky Utilities Transylvania S. Reeling off scores in the off-turf P.G. Johnson S. and GII Pilgrim S. last summer and fall in New York, the $97,000 Keeneland September grad was nevertheless overlooked at 30-1 in the Breeders' Cup and won like a favorite, kicking away to a three-length triumph. Trainer Mike Maker decided to give the dark bay colt a shot on dirt last out, but he faded to finish eighth after chasing the pace in the GII Fasig-Tipton Fountain of Youth S.

His main rivals appear to be Scarlett Sky (Sky Mesa) and Earls Rock (Ire) (Fascinating Rock {Ire}). The former followed up an impressive allowance victory Jan. 14 at Gulfstream with a narrow second to the undefeated Annex (Constitution) in the Palm Beach S. there Feb. 27, while the latter is two-for-two since coming to America, earning his first stakes success in the 6 1/2-furlong Baffle S. last out Feb. 5 at Santa Anita.

Rounding out Friday's stakes action is the Palisades Turf Sprint S. for the boys over 5 1/2 grass furlongs. The 10-horse group features an array of win candidates and there's a ton of early speed signed on. Fauci (Malibu Moon) makes his seasonal debut following a pair of runner-up efforts in the Skidmore S. and Kentucky Downs Juvenile Turf Sprint S. last summer. Washington-bred Bodenheimer (Bodemeister) also goes out first time as a 3-year-old and returns to the scene of his Indian Summer S. victory in October. The field's best Beyer belongs to first-turf Blameworthy (Blame), who got an 87 when digging in gamely after setting a scorching pace in a last-out allowance tally Mar. 11 at Fair Grounds.

A total of 18 stakes races worth a combined $4.1 million will be run at the meet, which runs Apr. 2-23 with first posts of 1:05 p.m. ET, with Saturday's blockbuster GII Toyota Blue Grass S. card serving as the centerpiece. All tickets for the meet will be sold in advance. Sunny conditions are expected for opening weekend, with chilly temperatures in the 40s Friday warming into the 60s for Saturday and Sunday.