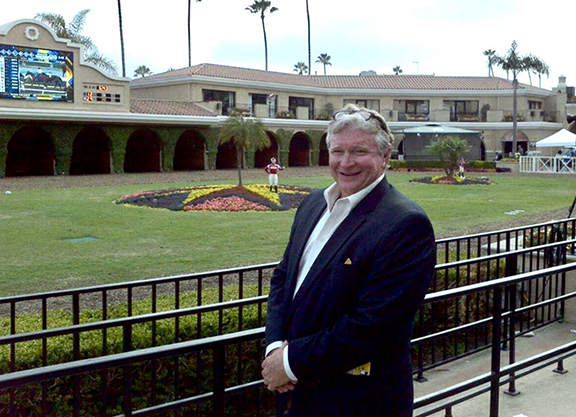 In Saturday's TDN, we ran the sad news of the passing of Dennis Lynch, the Senior Account Executive at Fasig-Tipton. One of the sad and strange things about the time in which find ourselves is the inability to gather at rituals such as funerals, where we have the opportunity to tell someone's loved ones how we felt about them, and make one another feel just a bit better through the sharing of stories. As such, we thought we'd give people that chance in our pages to let people talk about how they felt about Dennis.

There have been so many wonderful tributes that have poured out about Dennis in recent days, celebrating his strong values of family and faith, his generous spirit, as well as his unmatched sense of humor. His background in racing was rich, and his knowledge of the Thoroughbred deep. He knew horses, the racetrack, and “the game” as well as anyone.

There was so much more to Dennis then even these admirable traits–he lived a remarkably rich life. He was truly a renaissance man, with an insatiable desire to learn new skills and enjoy new experiences. He was extremely well read–particularly on the subjects of American history and Kentucky history. He loved to hunt, fish, play golf, play tennis, and travel. Story telling? Dennis could spin a yarn as well as anyone. Made the best (and probably strongest) martini that could be found in the state of Kentucky. At one point in time he bred Jack Russell terriers and even raced and competed them. He painted quite a bit in his later years (pictures, not houses, as he once told me), often giving them to his friends as gifts. He was so proud of his Irish Catholic upbringing–but also liked knowing that he had a touch of Italian in his heritage. This, coupled with his love of The Godfather, prompted him to learn Italian a few years ago ahead of a trip with his family to Italy. Prior to that trip, I had the pleasure of watching him try it out on an Italian speaking server at Prime Italian in Miami (she gave him high marks). He became a master of barbeque. I can remember so many times when he had to go home to smoke four or five pork shoulders that were needed last minute for a church function–always done at his own expense.

Dennis was incredibly charitable, always raising money for a cause he cared about. A few years ago, he helped spearhead fundraising for a new steeple for St. Peter and Paul Church in downtown Lexington–his parish. He went to church every Sunday, no matter where he was in the world, as that was how he was raised. He served on the board of the North Lexington YMCA, supported 4H, and donated his time to the United Way. He would often visit the sick and infirm. The list goes on and on.

As a racing historian, Dennis especially loved the Kentucky Derby. He would start working on his trifecta and superfecta each year two or three days before the race, deciding which horses to key and build his tickets around. He was successful in cashing those tickets more than a couple times.

Dennis liked to call his friends “his boys,” and I was fortunate enough to be considered one of these close friends. He knew my parents from his days in California, and when I came to Fasig-Tipton as an intern in 2008, he immediately looked after me both professionally and personally. There is no telling how many people have similar stories about Dennis–he was as big-hearted a person as one could ever hope to meet.

Having Dennis's friendship was a true blessing, and more valuable than cashing a superfecta ticket on Derby Day 1,000 times over. He was a friend of a lifetime to so many, enriching our lives more than he will ever know.

I first met Dennis on a phone call in the late 70s. At the time I was business and ad manager for the The Thoroughbred of California magazine, and was in the process of moving on to run CTBA Sales, the auction joint venture of Fasig-Tipton and the California Breeders Association. Dennis had been recommended by a friend at the Bloodhorse, and I hired him as my replacement based on that.

We of course became fast friends, just as he did with nearly everyone he encountered. By the mid 80s Dennis had gone on to work for his mentor, Gene Cleveland, and then began developing his bloodstock agency business. By that time I had thrown in with John Finney and Fasig in California after the CTBA had very unwisely(in my opinion) broken up the auction joint venture.

After a change in ownership at Fasig-Tipton in the late eighties, I began working on what would become Barretts, based at Fairplex in Pomona. And the most important person I knew that I needed to make Barretts work was Dennis Henry Lynch. To this day I am in awe of the doors that were opened to us all over the country because of the relationships he had already developed.

And largely because of him, we had a pretty great run from the beginning until he decided to go home to Kentucky to work for Fasig and raise his family.

I'll never forget how glad I was to have him with me on my worst night in the auction business. We had broken the 2-year-old auction record with Unbridled's Song at $1.4 million, and the buyer's trainer mysteriously put in a claim to return him. We all knew there was NOTHING wrong with the horse! Anyway, by the next afternoon, no one had picked up the horse, and Dennis and I went down and found him all alone in his stall without so much as a water bucket. Dennis got a shank, and led him up to our stable office, saying over and over, “This can't happen, Jer!”

The rest of that is history of course. Fast forward to last year when I first found out about his cancer diagnosis. We were having a conversation about our mentors in the business, and I told him that the late John Finney had the biggest influence on my own career.

Fortunately, I was able to add to that in a comment on Dennis' wonderful blog about his battle with cancer. I was able to express that, while Mr. Finney had been a terrific mentor in learning to run a auction company, it was Dennis who set the standard for success in the overall horse business, and more importantly in life in general.

No matter whose illustrious barn we visited, Dennis always went first to the grooms and hot walkers, and was usually able to call them by name. And he was the same at restaurants, hotels and car rental counters. He showed me that EVERYONE is important in the scheme of things, and I've tried to apply that in my own life, even though I'll never be nearly as good at it as he was. To him it was as natural as breathing.

We did not work together for very long, but Dennis made a huge impression on me in that time. More than his talent as a horseman it was his generosity that I will remember most. He truly cared about others even as he was already fighting his own battle. He always had a smile, a kind word, friendly advice or a funny story and he went out of his way to make someone else's day better. Dennis was a lovely man and I will miss him dearly, as I know everyone at Fasig-Tipton and many others will.

As a small breeding operation that would sometimes consign our own horses, Dennis Lynch always made us feel important as well as complimenting us on how good our horses looked. Each Spring his visits were uplifting always leaving us with pleasant thoughts and appreciation for our business. He not only represented Fasig Tipton well but was emblematic of how one should treat others in life. While we didn't know Dennis on a personal basis we are certain that his family is blessed with many memories they will cherish for life.

I taught one of Dennis's sons in 2007 in a time where racing was becoming a passion of mine. I was especially taken by a horse on the Derby trail named Zanjero and made no secret to students as the preps continued.

After the Derby, Dennis made arrangements for me to meet Zanjero–simply because he knew of my affinity. It was special, of course, to me, but later the next year when taking my students to a Seabiscuit field trip to Keeneland, Dennis was there as an invaluable source of information and access. He even paid for the bus to get us there so the trip wouldn't be missed.

I don't pretend that we were close, but that's my point: he did these things when he certainly didn't have to. His goodness was so clear. I am very saddened to have learned of his passing.

I prepped yearlings with Dennis at Buck Pond Farm when my father, Victor Heerman, was a partner in the ownership of the farm with Susan Proskauer. The most familiar family story concerning Dennis was that he sought out my father for advice, and perhaps a job, for how to become a bloodstock agent. My father handed him a pitchfork and pointed toward a stall. “That's where you start.” It's very much my father and Dennis retold it often. Dennis was always kind, generous, eager to learn, and full of humor. There were four of us working in the yearling barn that summer and one had to expect pranks and silliness.