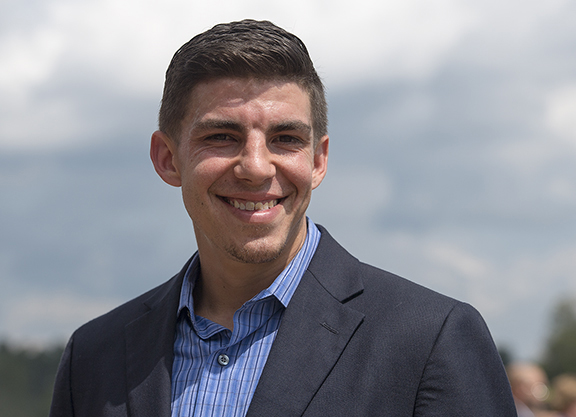 On paper, First Line (First Samurai) would appear to be in over his head in the GI Runhappy Travers S. But his young trainer insists he “will outrun his odds” and sees the horse starting in the GI Kentucky Derby. Orlando Noda is not lacking confidence.

It’s not hard to understand why. Training for just 16 months, Noda, 31, is in the midst of another strong Saratoga meet. With just six horses under his care at the start of the meet last year, he went three for nine. This year, with 18 horses, he is off to a  four-for-13 start. The latest win came Saturday with Mystery Bank (The Big Mystery). Making his first start for Noda after being trained by Saffie Joseph Jr., he won a maiden special weight on the grass and paid $18.

“We are grateful everything is working out,” Noda said. “We won for owners who have never won before in Saratoga. Everyone is thrilled that we are performing the way we are in Saratoga against the elite.”

Still training primarily claimers, Noda has long thought that First Line could be his breakout horse. He was trained by Brad Cox before he made his first career start and then privately acquired by Noda, who gallops many of his own horses.

“When I got him I knew he could run,” Noda said. “I’m not a light rider and he was putting in some good works for me. He was immature at the beginning but so game when he came to track. He loves to train. I hyped up the horse even before he started in his first race. I had big plans ever since I got him. I’ve been telling people he’s my Derby horse.”

But First Line wasn’t delivering. He was a distant fourth in his debut in January at Aqueduct and was still winless in three starts entering the Saratoga meet. Noda was able to find a nine-furlong maiden race on July 29 for the gelding’s next start and the result was a narrow win by a neck, good for a 90 Beyer Speed Figure.

“He just needed distance.” Noda said. “That made all the difference.”

First Line will now be coming back in 10 days for the Travers and stepping up from a maiden to a Grade I race where the competition will include the leading 3 year-old in training, Tiz the Law (Constitution). Noda said the first goal is to earn enough points to get into the field for the Derby, but he’s not ruling out a victory. He’s so confident in the horse that he said had the maiden race not filled he still would have entered First Line in the Travers.

“I’m entering to win.” he said of the Travers. “He might surprise some people.”

That Noda even has a Travers horse this early in his career is rather remarkable.

He came up under his father, trainer Jose Noda-Fernandez, who raced in Florida and the Mid-Atlantic. His next stop was Ocala, where he worked for several of the top farms there, including Hartley/DeRenzo and Crupi’s New Castle before joining the Mark Casse team. At each stop along the way, Noda tried to learn as much as he could.

“I learned that if you put a foundation into a horse before you work on speed that makes a horse last longer,” Noda said. “A lot of sale babies get pressed too early in their careers before they have really matured. Then they don’t make it past their 3-year-old year. Over all, everyone has their own opinions on how to train a horse. I think less is more as a baby.”

Ready to go out on his own, he joined forces with his brother Jonathan and formed Noda Brothers LLC. For much of 2019 Noda had no outside clients. It was just he and his brother. He started his first horse in March of last year and after 11 losses won his first race last June.

“You have to start as a claiming trainer to get the owners to notice you and give you those pedigree horses that are bound for stakes races,” he said.

During his brief career, Noda has won with 24 of his 126 starters for a wining rate of 19%. He has had only one prior start in a graded race.

It’s not just First Line, Noda can be ambitious when spotting his horses and isn’t afraid to run them at class levels that may seem to be a stretch.

“A lot of handicappers don’t pick me to win because I am always bumping up horses instead of dropping them,” Noda said. “It is an easier game when you can claim for $32,000 and drop them in for $25,000. Do that and you will win a high percentage. As long as the horse is doing good I want to test the waters going up in class.”

As often happens when a new trainer gets off to a fast start, Noda is getting a lot of inquiries from owners looking to give him horses. He said he has been having problems finding help at Saratoga and can’t take on any extra horses right now, but expects to expand his stable once he returns to Belmont. By the end of the year he expects to have about 40 horses. If he can get a big performance out of First Line in either the Travers or the Derby, that number may rise.

“This horse will fight to the end,” Noda said. “We have to test the waters. You never know.”