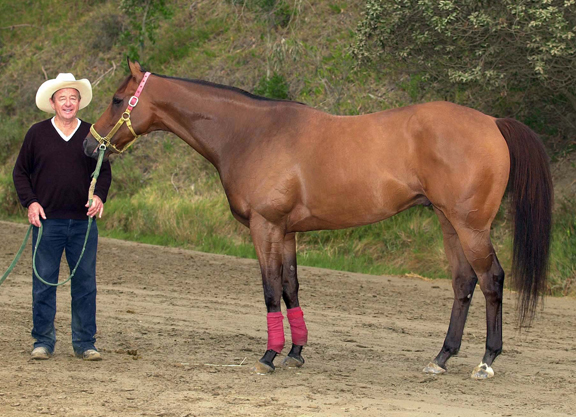 The California racing circuit lost one of its most charismatic, storied and successful training institutions and purveyors of good old-fashioned horsemanship when Bruce Headley passed away Friday at the age of 86, his family confirmed.

Earlier this week, Headley, whose health has been failing for a number of years, suffered bleeding to the brain, complications from which he eventually succumbed.

Few individuals have left such an indelible impression on the racing industry in the state–fewer still can boast such a steep climb within the sport from such relative obscurity.

Headley grew up on a small-holding in the City of Upland, nestled in the foothills of the San Gabriel Mountains, to parents who had no connection to horseracing.

But that didn't stop a 14-year-old Headley from making his way to the Suzie Q Ranch in Southern California–where he first met a baby-faced Bill Shoemaker–to embark on a race-riding career that was as brief as it was inauspicious due to a losing battle with the scales.

In 1959, Headley took out his training license, using $500 worth of WWII bonds to purchase a horse called Thorium–“a bucking son-of-a-bitch,” Headley once said–who would prove to be his first winner at Pomona Racetrack in September of that year.

It was Headley's working relationship with owner Kjell Qvale, a car executive and long-time president of Golden Gate Fields, that catapulted the trainer towards a glittering career built upon lickety-split speedballs and youngsters with working class pedigrees that he fashioned into record-setters and champions, some over many seasons.

The duo struck out fast and early with the first horse they bought together, a precocious juvenile called Trondheim who in May and June of 1967 claimed three stakes, including the Dinner S. at Golden Gate and the Haggin and Cabrillo S. at Hollywood Park.

In all, Headley trained seven individual Grade I winners, including Street Boss, Variety Road, Kalookan Queen, Bertrando, Got Koko, and M One Rifle. Arguably his greatest day in the sun came at Churchill Downs in November of 2000, when the 6-year-old Kona Gold (Java Gold) gritted out a tenacious victory in record time in the GI Breeders' Cup Sprint under Alex Solis.

That Kona Gold would remarkably claim his final graded stakes at the grand of age of nine wasn't the trainer's first time capturing lightening in a bottle. Eight years prior, Headley's Softshoe Sure Shot achieved the same feat when winning the GII San Carlos H. at Santa Anita (in the process beating Bertrando, a horse he had formerly conditioned to become California champion 2-year-old colt).

Achievements like these are a testament to the trainer's ethos of minimal veterinary intervention, and a hay, oats and water approach to the health and well-being of his trainees. If the horse was wrong, he'd turn them out. If the horse needed time, he'd give them all that and more.

But beyond achievements etched into the record books, Headley's legacy is shaped in other important ways.

One was his sheer work ethic–a reputation borne from decades of exercising the horses himself, even when his career soared. When training was over at Santa Anita, often he could be found at the nearby Fairplex racetrack, exercising the string he maintained there. Nor could you describe his training techniques as proforma.

Rather than jog to warm up, Headley's horses would launch into a gallop from a walk–a method he attributed to trainer R.H. [Red] McDaniels. You'd often see Headley's horses jog to and from the barn and the track–a technique, he said, to stop them from getting hot.

Horses were happiest and at their most relaxed, Headley believed, when skipping around the track of a morning, a big loop in the rider's reins. These are lessons this writer had the good fortune of picking up when working as a freelance rider briefly for the great trainer.

“He was practically a father to me,” said Solis, with whom Headley forged such a formidable partnership over many years. “He took me under his wing when I first came to California and helped me out. He was a really loyal guy.

“He rode his own horses and he knew what he was talking about. I rode for him for some twenty-odd years and he yelled at me probably once in that whole time, unhappy with the way I rode,” said Solis. “It was a lot of fun riding for him and spending time with him as he was such an incredible character.”

The last horse Headley officially started under his name was Zillinda, who finished third at Santa Anita Jan. 8. He leaves behind his wife, Aase, and two children, Karen and Gus, both of whom followed their father footsteps into the training business.

“He not only was a great person but an incredible horseman, and he always did the right thing by the horses,” said Solis. “There are some incredible horses that he bought and broke himself. And they ran forever,” he added.

“He was a great all-around man.”