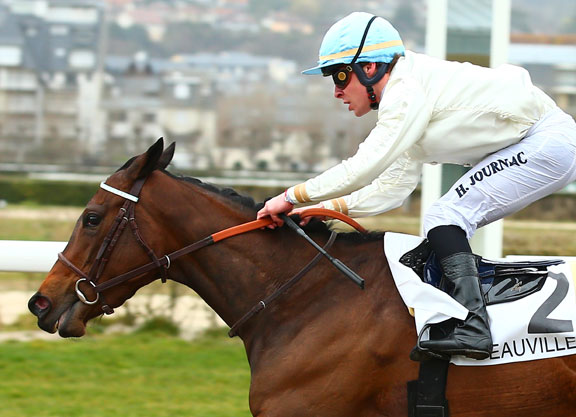 The two-day Arqana February Sale came to a close on Tuesday with figures up across the board. After a strong opening session on Monday led by the €250,000 AQPS gelding Hardi Du Mesnil (Fr) (Masterstroke), the sale continued apace during Tuesday's session of fillies, mares and yearlings and was topped by the 5-year-old Princess Isla (GB) (Frankel {GB}) (lot 309), who was bought by Anne-Sophie Yoh of Yohea for €110,000 on behalf of Xavier Marie of Haras de Hus. Marie is a more recent investor in racing stock and bought Anabasis (Ger) (High Chaparral {Ire}), the dam of Grade I winner A Raving Beauty (Ger) (Mastercraftsman {Ire}), for €320,000 at Arqana December. Princess Isla is in foal for the first time to dual Group 1-winning sprinter Ten Sovereigns (Ire).

“I've bought her for Xavier Marie of Haras de Hus,” said Anne-Sophie Yoh. “He's a new owner that is well-known for investing in sports horses, who is now turning towards racing. We really liked the mare's pedigree and she is the only one in foal to the sire in the catalogue. We're very happy. We don't know yet who she'll be covered by next–she'll go to the stud first.”

Bred by Dayton Investments, Princess Isla was a winner in March of 2019 at Deauville for trainer Jean-Claude Rouget. Her second dam is Peinture Bleue (Alydar), whose four stakes winners are headed by the G1 Prix de l'Arc de Triomphe and Classic winner and sire Peintre Celebre. Princess Isla had been a €420,000 buyback at the Arqana August Yearling Sale of 2017, and Langlais Bloodstock had purchased her for €62,000 out of Arqana's Summer Sale of 2019. Her elder sister Persian Sky (GB) (Galileo {Ire}) was bought by Mandore International Agency for €65,000 at the latest edition of Arqana's December Breeding Stock Sale.

It was another 5-year-old mare, Jet Setteuse (Fr) (Makfi {GB}) (lot 315) who found favour on Tuesday with Sylvain Vidal, and she is set to visit Le Havre (Ire) for her first covering after being scooped up for €95,000. A winner in her lone start at two for trainer Francois Rohaut, Jet Setteuse was placed in the G3 Prix Imprudence and a pair of listed races at three and was last seen winning a seven-furlong conditions race at Dax last June, after which she was a €90,000 buyback at the Arqana Summer Sale. Jet Setteuse is out of the listed-placed Pretty Panther (Fr) (Hurricane Run {Ire}).

“She's a lovely mare from a nice family of sprinters that were very tough on the racetrack,” said Vidal. “She'll go to Le Havre.”

BBA Ireland was the name on the ticket for the 10-year-old mare Honor Bound (GB) (Authorized {Ire}) (lot 233), who was sold for €60,000 by Haras des Cruchettes on behalf of Al Shahania Stud. Honor Bound won Lingfield's Listed Oaks Trial S. at three but beat just one home in the G1 Epsom Oaks and never won again. Her first foal, Rowland Ward (Ire) (Sea The Stars {Ire}), was a winner over the flat and jumps, while her second foal, the now 4-year-old Bound Edition (GB) (Dansili {GB}), is unraced. Honor Bound has a 2-year-old filly by Sea The Stars, a yearling filly by Lope De Vega (Ire) and is empty for 2021.

The G1 Prix Jacques le Marois winner Al Wukair (Ire) has his first runners this year, and it was a mare in foal to him who found favour with Artemis Bloodstock Investments for €50,000: Swan Valley (Fr) (Manduro {Ger}) (lot 330). Unraced herself, the 6-year-old Swan Valley comes from a top-class family, her winning dam Saga d'Ouilly (Fr) (Linamix {Fr}) being a full-sister to the G1 Prix de l'Arc de Triomphe winner Sagamix (Fr) and the G2 Prix de Malleret scorer Sage Et Jolie (Fr), and a half to G1 Criterium de Saint-Cloud winner Sagacity (Fr) (Highest Honor {Fr}) and to Shastye (Ire) (Danehill), the dam of Group 1 winners Japan (GB) (Galileo {Ire}) and Mogul (GB) (Galileo {Ire}). Swan Valley's first foal, a filly by Sidestep (Aus), died as a yearling, and she has a yearling daughter of Pedro The Great (Fr).

Trois Rivieres's Leaf Blower (Hat Trick {Jpn}) (lot 238) was another young mare offered in foal to a stallion with his first runners this year, in her case Caravaggio, and the winning full-sister to the dual Grade III winner Tricky Escape was picked up by Mandore International Agency for €44,000. The 6-year-old is carrying her second foal, having produced a colt by Karakontie (Jpn) last year. That colt, bought in utero by Samuel Blanchard when the mare was picked up for $13,000 at Keeneland November in 2019, was sold for €28,000 at Arqana December last year to Stroud Coleman Bloodstock.

Upon the conclusion of trade for the Arqana February Sale, Arqana President Eric Hoyeau said, “We're extremely pleased with this first sale of the season. The market showed itself to be dynamic throughout the two days, and aside from the final figures, there was also a real atmosphere. These results are very encouraging at this stage in the year, when the entries for the yearling sales are taking place and we're putting together the Breeze-Up catalogue. All the racing countries of Europe were represented with both buyers and vendors. The bidding online also worked very well. There has been real progression in the activity online since the Autumn. We have adapted it as we have evolved. This has borne its fruit and should continue to progress.”