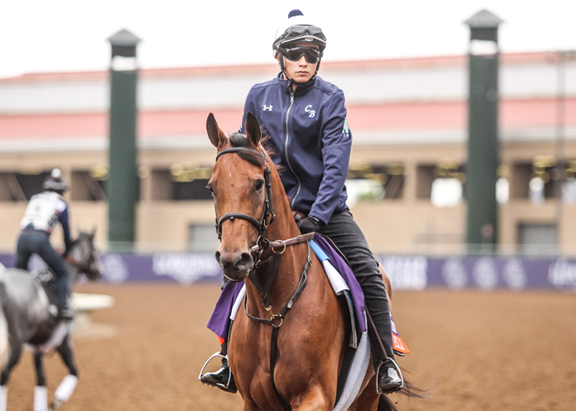 The aforementioned runaway GI Woodward S. and Whitney S. hero glided quite nicely over the surface, powering through an easy four-furlong spin in :49.40 (7/13) (ThoroStride Video) at daybreak shortly after 7 a.m.

After losing his tack in mid-stretch during an eventful gallop Friday, it was smooth sailing this time around for Dirt Mile contender Sharp Azteca (Freud) while jogging the wrong way along the outer rail.

The blinkered Ballagh Rocks (Stormy Atlantic), a close third in the GI Shadwell Turf Mile S., was on his toes before tuning up for the Mile with a four-furlong breeze over the lawn in :49.60.

The action began to pick up considerably following the 7:45 a.m. track renovation break.

Heavyweight sprinters Imperial Hint (Imperialism) (:24.20) and Mind Your Biscuits (Posse) (:36.40) both blew out down the stretch, with the former under a very snug hold beneath his very vocal exercise rider. “OK, OK,” he pleaded with his mount as it was time to slow down after they hit the wire.

Heart to Heart (English Channel) (Mile) and his popular heart-shaped blaze were awfully hard to miss as was the GI Breeders’ Cup Distaff-bound ‘TDN Rising Star’ Elate (Medaglia d’Oro), who continues to generate plenty of buzz since arriving from Hall of Famer Bill Mott’s New York base.

Trainer Jonathan Thomas proudly led out the unbeaten Catholic Boy (More Than Ready) (Juvenile Turf) through the tunnel after taking a tour of the paddock.

A pair of leading ladies–Lady Eli (Divine Park) (F/M Turf) and globetrotting ‘TDN Rising Star’ Lady Aurelia (Scat Daddy) (Turf Sprint)–put a perfect cap on the morning strutting their stuff during some light exercise just before 9:30 a.m. It was just about impossible to take your eyes off Lady Eli, who had a terrific bounce in her step sporting a pair of bell boots as she was out for a light jog while the latter was ponied to the track without a rider.