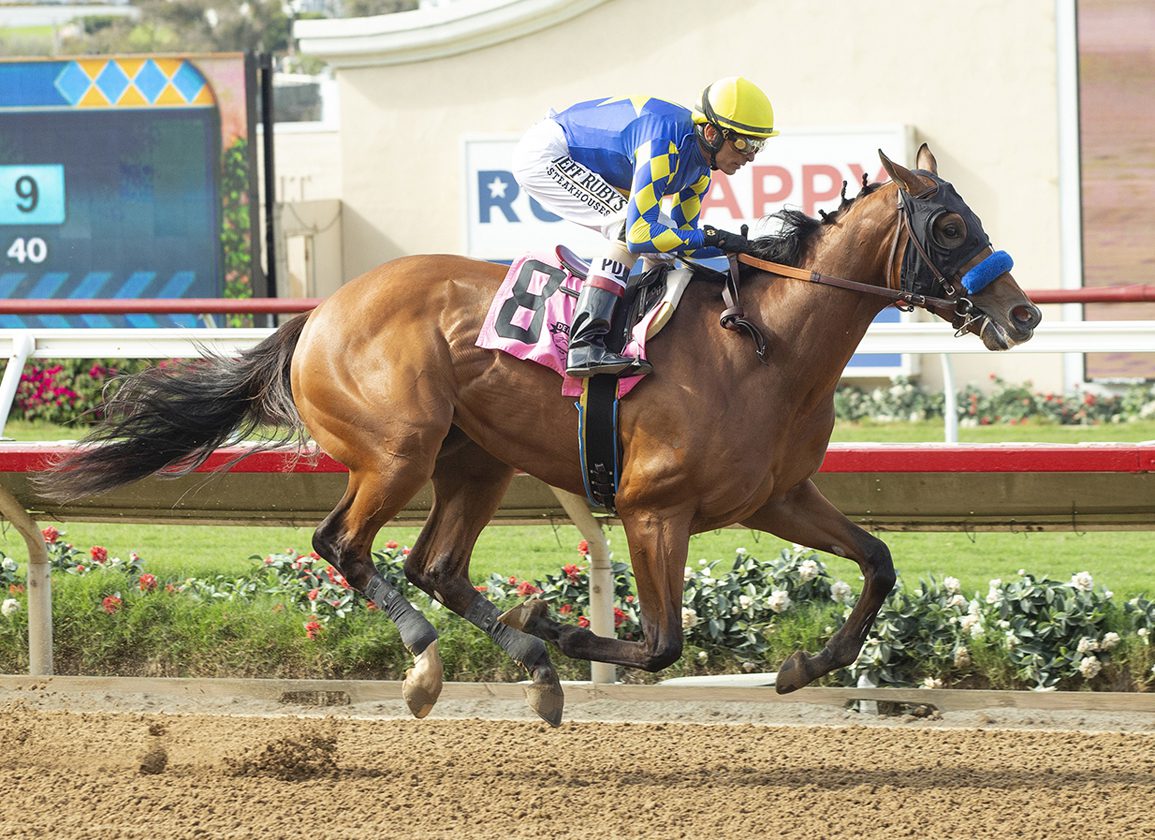 The team at Town and Country Farms knew they had a good one when heading into the Keeneland September sale last fall and its Into Mischief colt delivered in the sales ring when selling to the stallion-making partnership of SF Bloodstock/Starlight Racing/Madaket for $850,000. Now named Newgate, he began to justify the price tag with a 'TDN Rising Star'-worthy debut at Del Mar last Saturday (video). The Courtelis family's operation will be hoping history repeats itself when it sends a full-sister to the colt through the sales ring during the second session of the Fasig-Tipton Saratoga Selected Yearling Sale next Tuesday.

“She looks absolutely great coming into the sale and is probably our best yearling on the farm,” Town and Country's Chief Executive Officer Shannon Potter said of the yearling, who is catalogued as hip 165 at the two-day boutique auction. “We are really optimistic about what could happen in Saratoga.”

Newgate and the yearling filly are out of Majestic Presence (Majestic Warrior), who was third in the 2014 GIII Delta Downs Princess S. She was purchased by Town and Country while in foal to Runhappy for $360,000 at the 2017 Keeneland November sale.

“She was a big, pretty mare,” Potter said of Majestic Presence's appeal. “When I say pretty, she was really pretty. She was 16.1, she was nice and correct. She had a little bit of race record under her. She had everything that I was looking for and in that price range, she just fit all of those things. And she had a decent pedigree at the time. But now everything is filling in and coming together.”

A half-sister to graded winner Victress (Include) and to the dam of 2019 GII Summertime Oaks winner My Majestic Rose (Majestic Warrior), Majestic Presence has done nothing but impress Potter since joining the Town and Country broodmare band of some 30 head five years ago.

“Majestic Presence puts a really good foal on the ground every year,” Potter said. “I can't say enough about her, because whatever you breed her to, it always comes out looking really well.”

Newgate, the mare's third foal, was special from the start, according to Potter.

“He was just outstanding from the get-go and a very good foal,” Potter said. “By the time he was a yearling, he checked everybody's boxes as far as what you were looking for at the yearling sales.”

Sent off the prohibitive 1-2 favorite after plenty of pre-race hype, Newgate was no surprise while making his debut for the Bob Baffert barn last week.

“He was very, very impressive,” Potter said of the debut effort. “When [SF Bloodstock's] Tom Ryan and [Starlight Racing's] Jack Wolf and the gang got him, we were super excited that he was in their possession and we knew he was going to go to a top-class trainer. We were really high on that horse going into the race because we had heard so much from those guys and other people who thought that he was one of the top horses in Baffert's string–and we all know how many he has in his string.”

Majestic Presence has a weanling filly by Into Mischief's GI Kentucky Derby-winning son Authentic, “who is really good,” according to Potter. “We are just going to cross our fingers and put a little bubble wrap around her.”

The 10-year-old mare was bred back to champion and first-year sire Essential Quality.

“She has been bred to Into Mischief quite a few times and I was trying to breed her to something fresh and young,” Potter said of the mating decision. “And I really like Essential Quality. I thought most of the stuff that he has or maybe doesn't have, she would add to and we were just trying to totally freshen her up with a young stallion, and a promising young stallion at that.”

Through the Taylor Made Sales Agency consignment, Town and Country will offer three yearlings at next week's Fasig-Tipton Saratoga sale. The operation will be represented by hip 23, a colt by Candy Ride (Arg) who was co-bred with Off The Hook. Out of Mighty Eros (Freud), the yearling is a half-brother to graded winner and Grade I placed Faypien (Ghostzapper).

“[Off the Hook's] Joe Appelbaum and I are really good friends,” Potter said. “And we've done this back-to-back. He has a really good mare, so we took a shot and did that together. And this is as good a Candy Ride as I've seen. He is totally not your typical Candy Ride. He is very big, he has really nice feet on him and he just looks like a classic two-turn type of horse.”

Hip 48 is a filly by Medaglia d'Oro out of group winner Pretty Perfect (Ire) (Galileo {Ire}), a mare Town and Country purchased for $1.125 million at the 2018 Keeneland November sale.

“She is not your typical Medaglia d'Oro filly,” Potter said. “She has a lot of bone and a lot substance, body and hip and all of that. She has a wonderful walk to her. She is just going to be a nice pick up there for an end user, I would think.”

Potter has high hopes for the trio in Saratoga.

“Martin [Deanda], our yearling guy, and all the guys in our yearlings barn have done a really good job of prepping them and getting these three horses ready at the farm,” Potter said.

Fasig-Tipton got the yearling auction season off to a strong start with its July sale last month and Potter hopes that trend continues in Saratoga.

“If you look at July, it was good,” he said. “I am thinking it will be close to the same [at Saratoga]. I guess we will have to wait and see. But we are optimistic about where the business is right now and what is going on. So hopefully it will still stay strong.”

The Fasig-Tipton Saratoga sale will be held next Monday and Tuesday at the Humphrey S. Finney Pavilion. Each session begins at 6:30 p.m.