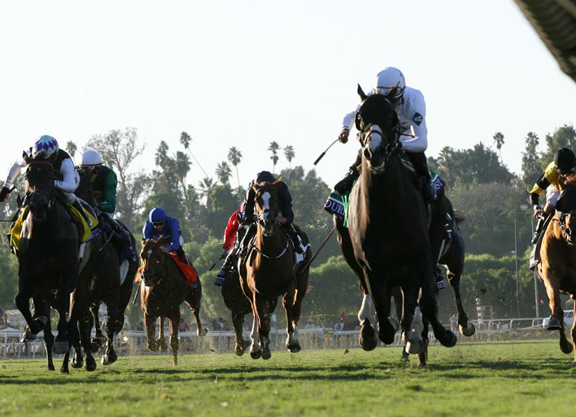 WinStar Farm, Wachtel Stable and Gary Barber’s Tourist made his latest visit to Santa Anita a memorable one, rallying into the stretch and holding defending champion Tepin at bay to capture the GI Breeders’ Cup Mile. It was the second Grade I success of the Bill Mott trainee’s career–having previously annexed the GI Fourstardave H. at Saratoga Aug. 20–and his third appearance in the Mile at the World Championships, making amends for his troubled 13th and 8th-place finishes in 2014 and 2015, respectively.

Tourist proved he belonged at the highest level with a runner-up finish in the 2014 GI Secretariat S. and, although his only win as a 4-year-old in 2015 came in the More Than Ready Mile at Kentucky Downs, he finished a narowly beaten third in the GI Shadwell Turf Mile at Keeneland last October. Third and fourth at the Grade I level to begin his 2016 campaign, the dark bay shipped to Santa Anita in June and finished second, beaten a half-length, by Midnight Storm in the GI Shoemaker Mile. He returned from a brief freshening to capture the Fourstardave at the Spa and recently encountered some early traffic trouble en-route to another close third behind reopposing Miss Temple City (Temple City) and Ironicus (Distorted Humor) in Keeneland’s Oct. 8 GI Shadwell Mile.

The WinStar colorbearer gave a favorable impression training beneath the San Gabriels all week and was sent postward just under his 15-1 morning line quote. Away without incident, Tourist was allowed to settle in midpack saving ground along the inside as rail-drawn What a View (Vronsky) outsprinted Midnight Storm and blitzed through a quarter-mile in :21.81. Holding his position under a patient Joel Rosario through a half in :44.64, Tourist advanced willingly on the far turn and was adroitly guided off the rail to move past the tiring pacesetter. The 5-year-old established control in midstretch and dug in determinedly to keep Tepin a half-length behind at the wire. Midnight Storm held on to complete the trifecta, while Ironicus closed belatedly to be fourth.

“Just a great trip,” Mott said. “He bailed us out. We had three that didn’t run so well and we had one last chance. He ran beautifully…I said, just come on, wire. But he was still running strong. I mean, he never looked like he weakened. He looked like he came on. I think the others were running from behind him, but I don’t think he was giving an inch.”

“It looked like they were going fast up front and I just wanted to save ground the whole way around and not have to stop him at any point in the race,” Rosario said of his ride. “I had to take a little hold turning for home to keep my position, but after that he got a clear run.”

Tepin, meanwhile, was in a similar midpack position to Tourist for the majority of race, came wide into the lane and came on with a gritty finish to complete the exacta.

“She ran a huge race,” trainer Mark Casse said. “Everybody was counting her out and she showed she’s still got it.”

WinStar CEO Elliott Walden said after the race that while future plans have yet to be decided, Tourist may be retired to a stallion career as a result of his victory.

“We’re going to talk about it as a group, but when you win a race like that against the best milers in the world, and he’s five years old, he’ll probably go to stud,” Walden asserted in the post-race press conference. “Give a lot of credit to Adam Wachtel. He came to me a few years ago and wanted to purchase half of this horse for Gary and himself. He’s always believed in him and believed he’s the best miler in the country.”