Torsilieri Steps Down as NSA President 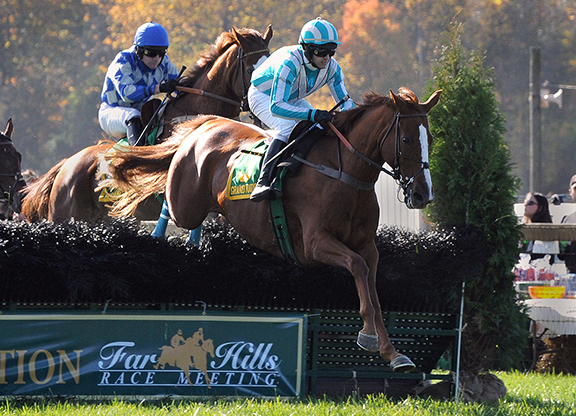 Guy Torsilieri, the president of the National Steeplechase Association since 2009, will step down from that role at the next meeting of the Board of Directors on Jan. 17, according to a press release from the NSA. A business owner and chairman of the Far Hills Race Meeting, Torsilieri said he will continue as a member of the Board of Directors and will remain active in the affairs of the NSA.

“I concluded that, as we embark on a new decade, it was a good point to turn over the reins to a new generation and new leaders,” Torsilieri said. “I am extremely proud of what the National Steeplechase Association has accomplished during my tenure, and I am also proud of the leadership that has emerged within our sport. While I will continue to be deeply involved in steeplechasing and the NSA, I am confident that the future is in good, capable hands.”

Torsilieri took office when all of Thoroughbred racing was burdened by the 2007-2008 recession, and NSA purses have increased more than 20%, from less than $5-million to a record $6.2-million in 2018, during his tenure. The increases have been across the board, and Torsilieri successfully encouraged pari-mutuel tracks such as Saratoga Race Course to maintain a strong jump-racing presence.

Working with the Board of Directors and assisted by Director of Racing Bill Gallo Jr. and a small NSA staff, he has advocated for American Steeplechasing as part of an international sport. His New Jersey meet has led the way in jump racing’s globalization, with the GI Grand National and other races attracting overseas participants.

“The gains that we made were not my doing alone,” he said. “I was honored to work with a team of level-headed leaders who know the sport intimately and grasped the importance of moving steeplechase racing forward.”

Perhaps his most lasting innovation—and a consequence of his team-building—will be a system of committees to address specific issues within steeplechase racing. While focusing attention on important issues confronting steeplechasing, the committees broadened the participation of all stakeholders in the decision-making process.

Torsilieri was elected to a new three-year term on the Board of Directors in November 2019, and he said he will remain available to the NSA’s new leadership as steeplechase racing forges into a new decade. “I’m not going away by any means,” Torsilieri said. “I look forward to working with the NSA’s new leaders, and I will assist them in any way that I can.”

Officers for 2020 will be elected at the Board of Directors meeting on Jan. 17.