Too Darn Hot Stretches Frankie's Streak In the Sussex 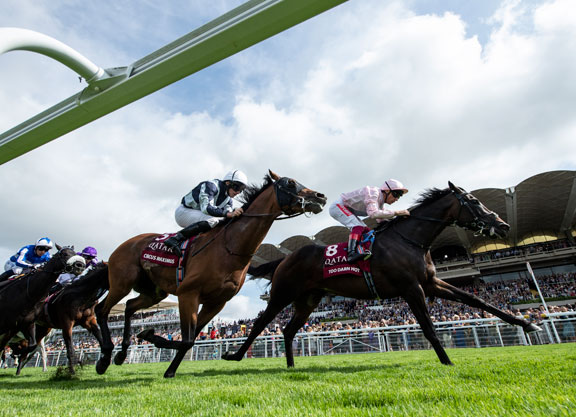 Exactly two months after his first group 1 victory of 2019, Frankie Dettori was churning out an incredible 11th for the year on Wednesday as he steered TDN Rising Star Too Darn Hot (GB) (Dubawi {Ire}) to success in Goodwood's G1 Qatar Sussex S. Gaining revenge on his G1 St James's Palace S. conqueror Circus Maximus (Ire) (Galileo {Ire}) in the process, the Lloyd-Webbers' homebred stayed in a pocket behind Phoenix of Spain (Ire) (Lope de Vega {Ire}) and that rival and swooped on the Ballydoyle runner a furlong out. Asserting for a half-length success, the even-money favourite who took the G1 Prix Jean Prat over seven furlongs at Deauville July 7 may be about to drop back in trip after this pace-packed display. “He is very good and had a smooth run into this race–he's got so much speed,” Dettori said. “I can't feel my arms at the moment! He's blessed with so much natural speed. They tried to stretch my stamina today, but I just had too many guns for them. He got the big one today that he really deserved. He has been unlucky for various reasons this year, but now he has showed his true colours and we are delighted.”

“It's not just group ones I'm winning, looking at the list they are absolutely amazing, mammoth races,” Dettori added. “King Georges, Eclipses and Gold Cups–they are proper group ones. I have had an amazing summer and long may it continue. Mr Gosden is the genius–he puts it on the plate for me and I am doing the rest. This is probably the best year I've had. I cannot say enough thanks to John Gosden. He is an amazing trainer with an amazing team and long may it continue.”

That connections would be having discussions about sprinting by midsummer was almost unthinkable at the end of Too Darn Hot's juvenile career, despite John Gosden's admission that the homebred probably had too much speed for the Derby. Nevertheless pushed down that route when making his belated comeback in the blue riband's premier trial, the G2 Dante S. at York May 16, the G1 Dewhurst S. hero came off second best to Telecaster (GB) (New Approach {Ire}) before being directed to The Curragh in an attempt to get a Classic in the bag in the G1 Irish 2000 Guineas May 25.

Questions had begun to be asked following his second to Phoenix of Spain there and subsequent third in the June 18 St James's Palace at Royal Ascot, but he enjoyed the kind of confidence-restorer that dreams are made of when putting Space Blues (Ire) (Dubawi {Ire}) in his place in the G1 Prix Jean Prat reverting to seven at Deauville July 7. Sitting pretty in third enjoying the perfect draft as Phoenix of Spain and Circus Maximus carved out the tempo, he was sheltered by Zabeel Prince (Ire) (Lope de Vega {Ire}) on his outer and for a while in the straight looked to be trapped in a pocket. With Frankie in the kind of form he is in, there was not a hint of concern and the space duly opened up as it always seems to for riders who are on the crest of a wave. Given a flick with the whip to subdue the gutsy Circus Maximus a furlong out, he was mainly hand ridden from there in another show of bullishness from Dettori.

“We knew that the lovely grey horse would go forward and that Circus Maximus would go forward and they set an even pace and Frankie was in tight,” Gosden said. “We knew he would be and I said to him beforehand to just be patient and if he didn't get through everyone would understand. I said not to commit three down and he didn't and fortunately Andrea's horse [Zabeel Prince] tired, the gap was there and off he went.”

“It was very important from my viewpoint that he won this,” Gosden added. “He was clear champion two-year-old last year and after he threw a splint before the Greenham we panicked and ran him in the Dante and then panicked again and went to Ireland which was incredibly stupid. The horse has shown his class here today and in the Prix Jean Prat, proved all his two-year-old form was solid and proved that he can overcome both trainer and manager. When you run them over the wrong trip off an interrupted preparation, what do you expect? My only consolation is that Aidan O'Brien ran Circus Maximus in the Derby!”

His trainer was thinking about various targets afterwards, but one race was standing out as the most suitable option. “His best trip is probably seven furlongs, but we'll probably stick to a mile now and the one race I'm really toying with is the Breeders' Cup Mile,” he said. “It is an oval flat track on Bermuda grass and a fast mile that suits a seven-furlong horse, so that might be the race to think about more than any so I'll probably work back from that. To come and win the Sussex is wonderful, as to me the great races are the Sussex, the Jacques Le Marois and the QEII–the all-aged group 1s. I have put him in the sprints too and I wouldn't be frightened about running him in the [Oct. 19 G1 British Champions] Sprint on Champions Day. The stiff mile and rain caught him out at Ascot, as he's an out-and-out speed horse. I know his mother stayed a mile and a half, but this is a champion two-year-old with proven speed. This get a rather large monkey off our back.”

“I don't think he will be remaining in training next year,” his trainer continued. “When you have been champion two-year-old and have won two group ones this year, with hopefully more to come, I think he has done his job. It was rather the same with Kingman and Roaring Lion. Their commercial value becomes so great because of their speed and being champion two-year-old and that takes over.”

Aidan O'Brien said of Circus Maximus, “You would have to be very happy with that. We know that he gets a mile and a quarter well, so we have that option, to go up in trip, or we can stay where we are. The next one to come is York and we need to decide whether we go up to a mile and a quarter there. There are a lot of things open to him, because he is a relaxed horse. You wouldn't believe how relaxed at home he is, he just takes everything in his stride.” Ryan Moore added, “He ran a super race, I think he has come forward since Ascot.” O'Brien also said of the the third I Can Fly (GB) (Fastnet Rock {Aus}), who was 1 1/4 lengths away. “She has run a stormer. When the ground gets easier, it will help her. A mile, on easy ground, with a strong pace is what she loves. She is more of an autumn horse.”

Too Darn Hot is the fastest high-profile runner for his family, which is more akin to generating middle-distance performers or stayers like the triple group 1-winning dam Dar Re Mi (GB) (Singspiel {Ire}) or his full-sisters Lah Ti Dar (GB) and So Mi Dar (GB). Lah Ti Dar has been runner-up in the G1 St Leger and G1 Grand Prix de Saint-Cloud either side of taking the G2 Middleton S. over an extended 10 furlongs in May, while So Mi Dar took the G3 Musidora S. and was third in the G1 Prix de l'Opera.