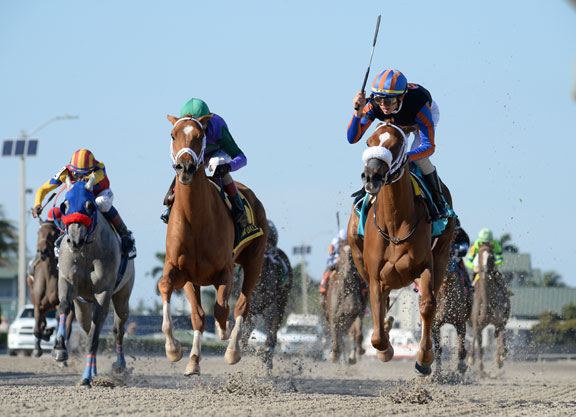 In the Feb. 29 GII Davona Dale S. at Gulfstream, two unbeaten fillies squared off while taking the majority of the public support, with the second choice narrow edging the favorite. Saturday, Tonalist's Shape (Tonalist) and Spice Is Nice (Curlin) will do battle again, alongside 10 other 3-year-old fillies, in the GII Gulfstream Park Oaks at the Hallandale oval.

Rallying to a 19-1 upset on debut for Sabana Farms and Juan Avila here last September, Tonalist's Shape was privately purchased and transferred to Saffie Joseph, for whom she captured a Gulfstream West optional claimer and the local Hut Hut S. to close out her juvenile campaign. Opening her 3-year-old account with a victory in the GIII Forward Gal S. that earned just a 70 Beyer, the chestnut was off at 21-10 in the Davona Dale and turned back all comers to prevail by 1 1/4 lengths.

Normally a four-for-four filly with a last-out graded stakes win on her resume would be heavily favored next out, but instead it was once-raced Spice Is Nice who went off at 7-10. Debuting Jan. 12 going a mile here, the $1.05-million Keeneland September buy snuck through a rail opening midway on the turn and burst away to a devastating 12-length romp, earning her 'TDN Rising Star' badge. Never quite able to get to her more experienced rival in the Davona Dale, she nevertheless finished clear for the place and figures to be prominent again in this first two-turn test.

Looking for a bounceback is Godolphin homebred Lake Avenue (Tapit). A good second debuting at six furlongs Oct. 6 at Belmont, the Bill Mott trainee went to the front and never looked back in a 12 3/4-length maiden-breaking rout Nov. 14 at Aqueduct and wired her foes once again in the GII Demoiselle S. there Dec. 7. Given a few months off, she returned at 4-5 in the Busher Invitational S. Mar. 7 at the Big A and wilted after setting a hot pace to finish a well-beaten fourth.

Up-and-coming Lucrezia (Into Mischief) looms as a major contender for the Arnaud Delacour barn. Runner-up debuting on the Keeneland main track Oct. 5, the bay returned 18 days later over the lawn in Lexington to graduate by two lengths with a strong 86 Beyer. Disappointing when fifth in the Stewart Manor S. on the Aqueduct turf Nov. 10, she annexed the Sandpiper S. when returned to dirt Dec. 7 at Tampa and stretched out beyond six furlongs for the first time to dominate the Suncoast S. by five lengths Feb. 8 in Oldsmar.