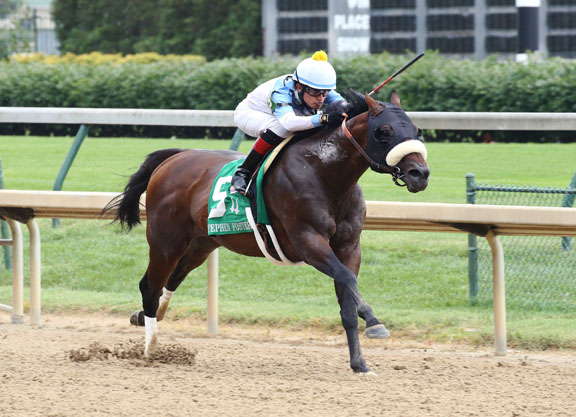 Leading GI Breeders' Cup Classic contender Tom's d'Etat (Smart Strike–Julia Tuttle, by Giant's Causeway), hero of the 2019 GI Clark S. and an impressive last out winner of the GII Stephen Foster S. with a career-best 109 Beyer Speed Figure, will stand at WinStar Farm upon the conclusion of his racing career.

Campaigned by Gayle Benson's G M B Racing and trainer Al Stall, Jr., he has compiled a record of 18-11-2-1 and earnings of $1,627,272. Tom's d'Etat is currently on a four-race winning streak and has his sights set on the GI Whitney S. at Saratoga for his next target.

“I have been honored to be able to train two great horses in [2010 Champion Older Horse and leading stallion] Blame and Tom's d'Etat,” said Stall. “[Tom's d'Etat] has been brilliant winning four in a row, and I can't wait to lead him back over there in the Whitney.”

Bred in Kentucky by SF Bloodstock LLC., the 7-year-old brought $330,000 as a KEESEP yearling. He is produced by the stakes-winning and multiple stakes-placed Giant's Causeway mare Julia Tuttle, who is out of Candy Cane (Arg), a full sister to GI Pacific Classic winner and leading sire Candy Ride (Arg).

“When my late husband, Tom, decided in 2014 that we were going to enter the horse racing business, the first place we came to was WinStar Farm to see their operation,” said Gayle Benson, owner of the New Orleans Saints and New Orleans Pelicans. “G M B Racing is extremely excited that our best horse, Tom's d'Etat, will begin his stud career with Kenny Troutt and his entire team at WinStar. We look forward to watching the second half of his career be just as successful as his first, and we know he will get that opportunity at WinStar. I am also eager to bring many of our mares from Benson Farm to breed to him in the coming years.”

Elliott Walden, WinStar's president, CEO, and racing manager, added, “Tom's d'Etat has proven over the last two years to be of the highest quality. Eleven of his last 12 Thoro-Graph figures are negative numbers. He has nine triple-digit Beyers and eight in a row. He was .02 off the track record in his last start at historic Churchill Downs, and he won two of the best races in the country at 1 1/8 miles in the Stephen Foster and the Clark.

“Any way you slice it, he is top class,” Walden continued. “He is the last great son of Smart Strike from the family of Candy Ride. We walked Speightstown into the stallion barn at age seven and Distorted Humor at age six. Hopefully, he will be another story we can tell how he defied the odds like them.”