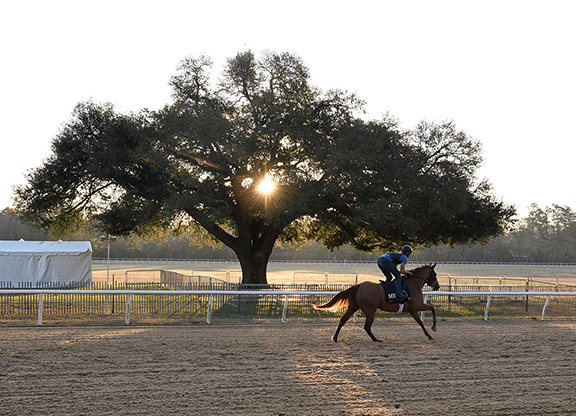 In every crisis, it's possible to find examples of kindness and generosity, of people reaching out to help total strangers out of the goodness of their heart. To focus attention on the many people in the industry who have stepped forward to help those who have been impacted by the coronavirus, the TDN has launched a series that we hope will put a smile on your face during these difficult times. We'll do our best to bring you a little bit of good news every day.

Most of the trainers who winter at the Aiken Training Track would be gone by now, their horses headed to tracks like Keeneland, Churchill Downs and Belmont. But with the coronavirus having shut down most racing across the country and many tracks not accepting new horses, many of Aiken's trainers have nowhere to go and no income coming in. It's a precarious situation to be in, but the management of the historic training track is trying to make things easier for its horsemen.

The Aiken Training Track, which includes about 300 stalls, has cut the usage fees trainers must pay from $200 a month to $100 a month.

“The Board of Directors had a meeting in which we were trying to figure out ways to help the horsemen,” said Cary Frommer, who is a member of the track's Board of Directors and a past president. “In this day and age, it's hard to figure things out. Everybody is under financial pressure with what has happened to the economy. Somebody came up with idea of cutting in half the rate for training and everybody thought it was a great idea. We are a small community and the trainers are hard-working people who are trying to make ends meet. The track wanted to do something to reach out to them.”

The Aiken training facility opened in 1941 and one of its first residents was Shut Out, the winner of the 1942 Kentucky Derby. It became the winter home for many of the horses from the prestigious “society” stables of the time, like Rokeby Stable, Greentree, the Phipps Family, King Ranch, C.V. Whitney and Claiborne Farm. With many of those stables folding, Aiken had to redefine itself and did so by bringing in some smaller stables and people like Frommer, who deal with 2-year-olds, either preparing them for the sales or getting them ready for racing before they are sent to their regular trainers.

Frommer said Aiken would be glad to give new trainers a place to train and care for their horses, but said the cutback in the usage fee is primarily meant for those who are already at Aiken.

Charging a reduced rate, Aiken will take a hit to its bottom line, but Frommer doesn't see it that way.

“Ultimately, the people who are here are the core people who come here every year,” she said. “We want them to stay in business and we wanted to do what we could do to help them, That doesn't go just for trainers. Aiken is a small, community-minded place and everybody wants to help in any way they can. The track will be okay. We'll be fine.”

Among the reasons why the training center is in a strong enough position financially where it can cut its rates is that it held the annual Aiken Trials Mar. 14. The trials draw a large and festive crowd and bring in a substantial amount of money for the training center. The races were held before South Carolina Governor Henry McMaster put in place any rules regarding large gatherings.

“We squeaked them out,” Frommer said. “Up until the day before, we were talking about canceling it. It turned out to be a really successful day. As far as we know, nobody got sick. There is a lot less of the virus in this county than in other places. There was a lot of separation going on, but we all had fun and enjoyed the racing. That was before this tipped into no man's land like it did the next week.”

Subsequent events in Aiken, like the Aiken Spring Steeplechase Meet, were canceled. The steeplechase races traditionally draw a crowd of about 30,000. It's part of the new normal in Aiken, a town, like most every other one in America, that is still figuring out how to get through these difficult times. That includes the horsemen who come each year to South Carolina. At the very least, though, they have a place to train their horses and can do so without having to worry about onerous stabling charges.