To Hell and Back: Belmont Marks a Deserved Triumph for New York City 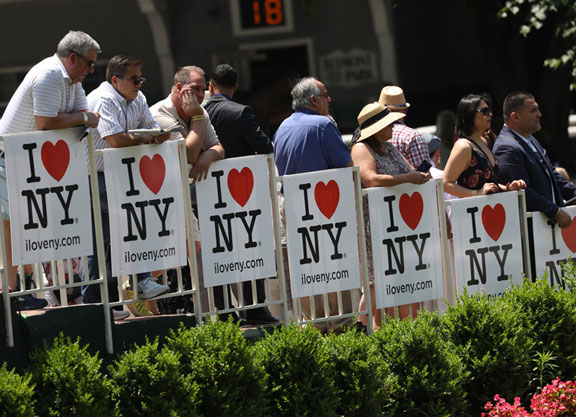 The paddock at Belmont | Horsephotos

The history of Belmont Park, believe it or not, goes back over 350 years, to when America itself wasn't even an idea yet. In 1665, New York's colonial governor Richard Nicholl constructed a racetrack called Newmarket in Queens. It stood for over a century, and proved so popular that even after the British were expelled in 1783, a thirst for horse racing lived on in the hearts of newly independent New Yorkers. Union Course sprouted up in 1821 and became the country's leading track. After that came Brighton Beach Race Course, which helped create the New York institution of amusement at Coney Island. The plants of Sheepshead Bay, Gravesend, Jerome Park, Aqueduct and many others followed soon after as enterprises competing to satisfy the city's enduring racing fix.

Then, on May 4, 1905, on a vast 400-acre expanse of land straddling the border of New York City and Long Island, Belmont Park opened. It was in the same area that Newmarket had sat atop hundreds of years earlier, but instead of a monument to British occupation and wealth, Belmont became an American treasure, open for all to enjoy. Which they did, by the tens of thousands, from all walks of the now industrialized city.

“The attendance, moreover, was not restricted to any one locality nor to any one class … The Bowery and the Avenue mingled in the surging democracy of the betting ring,” said the New York Tribute in its coverage of opening day.

The Belmont Stakes, previously run at Jerome Park and Morris Park, moved to its permanent home later that spring. Over the past 115 years, legends were born and furnished in that race and at that track. Man O' War, Secretariat, Seattle Slew, American Pharoah, all had to come prove their greatness by passing the Test of the Champion.

Beyond the equine performances, the track has seen the ups and downs of modern history and weathered every storm. The anti-gambling laws that shut it down for two years soon after it opened. The Great Depression. World War II. But nothing could prepare Belmont, or New York City, for what was visited upon it this spring.

New York City is a gateway to the rest of the world. But this year, that role cost it dearly, as flights from Europe packed with coronavirus-infected travelers poured into the area by the hundreds of thousands through March. It was a timebomb. By April, it had exploded. The biggest city in America screeched to a halt as everyone, from the governor to the citizens, turned their lives upside down and inside out to try to mitigate a horrendous pandemic that had already spread like wildfire.

By mid-April, 800–eight hundred–of our neighbors were dying every single day. The equivalent of all the lives we lost on 9/11, every four days. The plague was so ubiquitous and murderous that freezer trucks had to be parked outside of our hospitals because the morgues had so quickly reached their capacity of bodies. The steady wail of ambulance sirens was a constant reminder of the hell we were in. Going to the grocery store, a chore we never thought twice about before, suddenly meant taking your life into your hands. All in all, over 20,000 people in the city have been killed. That's more than one in every 400 New York City residents. And it's not over.

But one thing about New York City that makes it special that you can't understand if you haven't lived here, is that we look out for each other. We've proven it time and time again. We bounced back from 9/11 with solidarity and generosity and went about our lives. When outsiders predicted chaos, we took care of our city during the 2003 blackout and again through Hurricane Sandy. Crime plummeted exactly when the city was at its most vulnerable. Yes, there's bluntness and some rudeness and if you're a tourist you might've been bumped out of the way once or twice by a muttering New Yorker. But there's also compassion, understanding and empathy. You can't survive in a city of 8,000,000 without all of those attributes.

We stared down the greatest existential threat to a city that's faced far too many of them. The devastation has been incomprehensible. I personally lost a friend. But we tamed the beast far better than projected and we flattened the curve, again because we looked out for each other and sacrificed. Today, New York, after being the epicenter of the global crisis, is in a far better position with the virus than most of America.

Because of that, we get a summer. We get to live our lives with reasonable precautions for the next few months. And amid a sports desert, racing has been an oasis. So it's fitting that on the first day of that summer, we get: the Belmont Stakes. The first major sports attraction in New York since the pandemic descended upon us.

In my high school days, I would sit alone in the sprawling Belmont grandstand on a random Wednesday and just soak in the sights of a game I loved. The bucolic serenity of essentially having the country's biggest racetrack to myself helped me clear my mind and battle the anxiety of a teenager growing up in post-9/11 New York. It was peace at a time when life in New York didn't have much of it. So it makes sense on a personal level that that cavernous track returns to provide peace in a time of distress for the city once more.

And even though we may not have the roar of the crowd this year, that just amplifies the sounds unique to our sport even more: the thundering rumble of hooves, the exultations of jockeys, the reverberating ring of the starting gate.

Whatever lies beyond the horizon, we have reason right now to be proud even as we mourn. Communities are what get humans through hardship, and through that hardship, those communities become tighter knit. It's happened in racing, and it's certainly happened in New York City. So you'll excuse me if I shed a few tears when those horses come out to that track Saturday to the echo of booming horns and Frank Sinatra's timeless voice. We've all earned the opportunity to let it out.