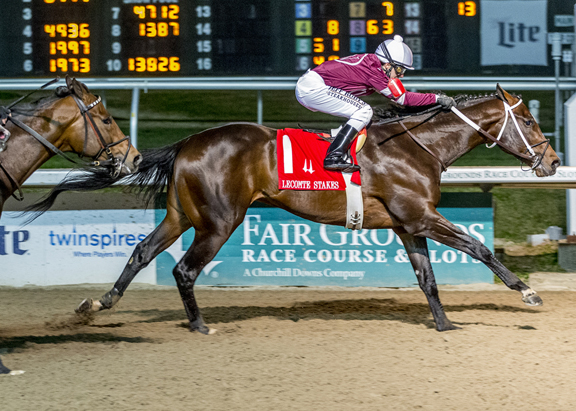 Midnight Bourbon (Tiznow) put himself on the GI Kentucky Derby trail with a tenacious, one-length front-running score in Saturday's GIII Lecomte S. at Fair Grounds. Proxy (Tapit) was second; 4-5 favorite and 'TDN Rising Star' Mandaloun (Into Mischief) was third after a wide trip in his two-turn debut.

The 7-2 shot left the gate running from his rail draw and led the scratched-down field of eight into the clubhouse turn. Midnight Bourbon cruised along on the front end beneath Joe Talamo through fractions of :24.68 and :48.99, while Proxy, a winner of two straight at Fair Grounds, and Juddmonte's highly regarded unbeaten Mandaloun, began to swarm in as they approached the quarter pole. Midnight Bourbon still had plenty left, however, and kept finding in the stretch as Proxy outgamed Mandaloun for second.

“Lovely horse, he's a beautiful individual,” Asmussen said. “Obviously, he had run some solid races, but we were very much looking forward to getting him into two-turn races. His pedigree, we think that going further will help him. He's got a beautiful stride to him. He was away nice and cleanly and Joe gave him a nice trip. He's going to develop into an excellent 3-year-old.”

The GII Risen Star S. Feb 13 will be next for Midnight Bourbon.

“We were very excited to get him down here and get him in this series,” Asmussen continued. “With him being capable of what he is away from there, the ground that he covers, I think it's a natural fit.”

The unraced dam of Midnight Bourbon, Catch the Moon, has an unblemished record, with all four of her foals to race–or 100%–now graded stakes winners, making her singlehandedly responsible for four of Malibu Moon's 48 black-type winners out of his daughters. Girvin (Tale of Ekati), winner of the 2018 GI Haskell Invitational S., GII Louisiana Derby, and GII Risen Star S., is the best, followed by additional graded winners Cocked and Loaded (Colonel John) and Pirate's Punch (Shanghai Bobby). The mare also has a 2-year-old colt by Curlin, who hammered for $500,000 last September at Keeneland, plus a yearling colt by Quality Road and she was bred back to Curlin for 2021.

Catch the Moon's first two dams were Florida-breds for John Franks and her fifth through seventh dams were California-breds for Rex Ellsworth. She last sold for $240,000 carrying Pirate's Punch in 2015 at Keeneland November and is now part of the powerful Stonestreet broodmare band. Catch the Moon's dam, Catch My Fancy, is inbred 3×2 to Louisiana star Monique Rene (Prince of Ascot), whose descendants of the last 25 years include Canadian champion Kiss a Native (Kissin Kris), GISWs Yes It's True (Is It True) and Silver Max (Badge of Silver), as well as recently retired GSW & MGISP Shancelot (Shanghai Bobby).