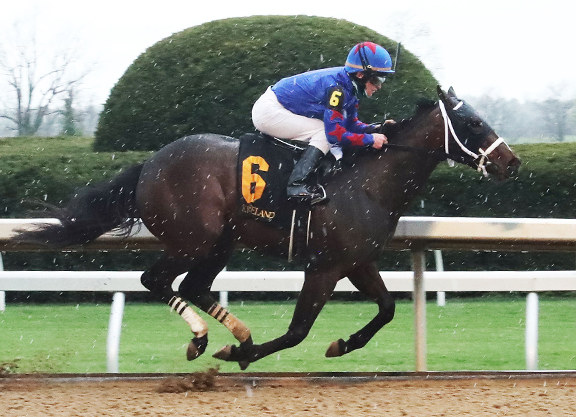 2nd-Keeneland, $55,240, Msw, 4-8, 2yo, f, 4 1/2f, :52.04, ft, 1 length.
SHESGOTATTITUDE (f, 2, Tiznow–Mackenzie Capri, by Eskendereya) was allowed to drift up to 21-5–better than twice her morning line–in the face of the heavily backed Wesley Ward 3-5 firster Twilight Gleaming (Ire) (National Defense {GB}) and ran to some eye-popping morning trials to provide trainer John Ennis with his second debut winner of the meet. Exiting a bullet three-furlong blowout in :34 flat (1/32) over this main track Mar. 30, the bay filly hit the ground running and showed the way exiting the chute through an opening quarter-mile in :22.41. She cut the corner into the stretch and responded gamely through the final 50 yards to score by a length. Twilight Gleaming, the first runner for her Irish National Stud-based stallion, was slowly into stride, raced three wide around the turn, loomed with every chance at the furlong pole and could not sustain a winning bid. James Graham was in the irons for Ennis, the same team responsible for the good-looking debut winner Bohemian Frost (Frosted) on opening day Apr. 2. The winner's dam, a half-sister to SW & GSP 'TDN Rising Star' Telekinesis (Ghostzapper), was acquired with this filly in utero for $85,000 at the 2018 Keeneland November sale. Shesgotattitude's third dam was MGSW/MGISP Gold Mover (Gold Fever), whose SW daughter Giant Mover (Giant's Causeway) produced GSW & GISP Family Tree (Smart Strike) and GSW Liora (Candy Ride {Arg}), runner-up in the 2019 GI Kentucky Oaks. Mackenzie Capri is the dam of a yearling colt by Kantharos and was most recently covered by The Factor. Lifetime Record: 1-1-0-0, $36,000. \fs21fs21 Click for the Equibase.com chart or VIDEO, sponsored by TVG.
O-Ken Donworth & John Ennis; B-Des Ryan, Ken Donworth & Tony Dardis (KY); T-John Ennis.