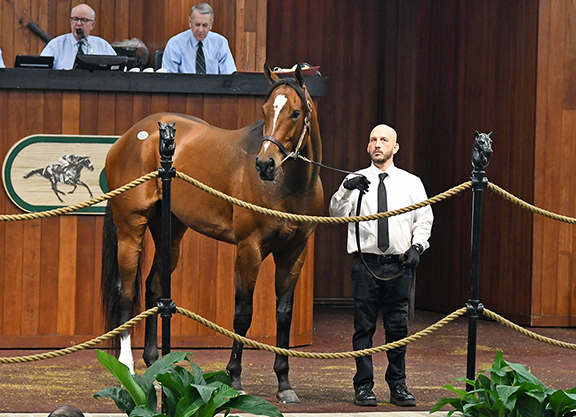 Three-year-old Bear Brian (Tiznow), a winner in his only trip to the post so far, topped Tuesday's opening session of the Ocala Breeders' Sales Company's Winter Mixed Sale when bringing a final bid of $150,000 from Canadian-born trainer Kerri Raven during the day's racehorses in training section. A colt by Practical Joke was the session's top-priced short yearling when selling to Clark Shepherd of Shepherd Equine Advisors for $130,000. Both were consigned by Francis and Barbara Vanlangendonck's Summerfield.

“The only thing that limits you here is the quality of the horse,” Francis Vanlangendonck said of the strength of the market in Ocala Tuesday. “I think there was plenty of money to buy anything that was here. I was pleasantly surprised that we were able to sell almost everything–all but one horse–today, and there were multiple bidders on each one. So I was thrilled, actually, with the action we had. I don't think anybody is going into a sale at any time in the last eight months not worried, but it is holding up.”

“The racehorses sold really well,” Vanlangendonck said. “I mean, really well. Again, there were multiple people on almost every one of them.”

Bear Brian (hip 368), purchased for $300,000 as a weanling at the 2018 Keeneland November sale, rallied late to get his head in front on the wire in his six-furlong unveiling at Sam Houston Race Park Jan. 9 for Stonestreet Stables and trainer Steve Asmussen.

“There were five or six people on him,” Vanlangendonck said after watching the newly turned sophomore top Tuesday's session when selling for $150,000. “He is a beautiful colt and showed some form. This horse vetted really well, looked good, he's a beautiful horse and he looked good on the track when we galloped. I think everybody was looking at him and saying, 'He won first time out and that's hard to do no matter where you do it.' The fact that he is sound and pretty helped a lot.”

Raven purchased three horses during the horses of racing age section Tuesday, going to $90,000 to acquire an unraced 3-year-old colt by Distorted Humor (hip 315) and to $60,000 to purchase the 5-year-old Jungle Fighter (Animal Kingdom) (hip 257).

A colt by Practical Joke (hip 182) was the top-priced offering during the consignor preferred section of the Winter Mixed Sale when selling for $130,000 to Shepherd's on-line bid. Shepherd was acting on behalf of Highlander Training Center owner Larry Hirsch who plans on racing the short yearling.

“He fit the mold of most of the good Practical Jokes that I've seen,” Shepherd said of the colt. “They all have a great walk and this colt was no different. He has a great body on him. And from a pedigree standpoint, I think Practical Joke works with a lot of mares. Every time that I see that happen in the very beginning, when they work with a broad base of mares, that dictates a racehorse sire. And they sure look the part.”

Asked if he had been impressed by Practical Joke's progeny, Shepherd said, “From day one. Even his first year standing, I recommended him to a lot of people for a lot of mares. When you go to the sales and start seeing his weanlings, you just have to like the package you see and then they start developing into quality yearlings. And word on the street is that the pinhookers are loving theirs.”

Consigned by Summerfield, the short yearling is the first foal out of Mobeautiful (Uncle Mo). He was bred by Hartley/DeRenzo Thoroughbreds.

“Practical Joke has been pretty popular,” Vanlangendonck said when asked about the yearling's appeal. “He is kind of the buzz stallion down here with the training guys. A lot of them are talking about the ones they have are training on. So that helped. And he's out of an Uncle Mo mare and he has an Uncle Mo look to him with some leg. So between the combination of the two, there were seven or eight of the better eyes here on the grounds that were on him. He was that kind of horse.”

Randy Hartley and Dean DeRenzo purchased Mobeautiful's dam Switchboard (Bernardini) for $160,000 at the 2011 Keeneland September Yearling Sale with the intention of pinhooking her the following spring. An injury ended those plans and the Ocala horsemen added her to their broodmare band. Her first foal was Mobeautiful, who likewise missed the sales. Mobeautiful won two of four starts for Hartley in 2018. The 6-year-old mare was bred to Bolt d'Oro last year.

The Winter Mixed sale marks the fourth OBS auction to offer buyers the option to bid online. Shepherd took advantage of that opportunity Tuesday and was pleased with the result.

“This was kind of a last minute deal, so I wasn't even there,” Shepherd said. “I had people doing some things for me, sending back videos and pictures, and I had the vets doing some work for me. And I bid online. I didn't have the warm fuzzy feeling about it as being there myself, but we put a good team together.”

Of the experience of bidding online, Shepherd said, “I had no idea what to expect. Of course, I got on there yesterday and I was like a kid just trying to surf it and make sure I knew my way around. I was saying to myself, 'Well, surely it's not this simple.' But it was.”

Asked if he planned on doing more bidding online, Shepherd admitted, “Only if I have to. I would rather have my feet on the ground and see what I see. You can buy with more confidence that way. But we adapted on this one and obviously landed on a good horse and had to fight for him.”

The Winter Mixed sale continues with an open session beginning at 10:30 a.m. Wednesday.