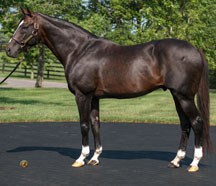 6th-FG, $38,000, Alw (NW1X), Opt. Clm ($50,000), 12-28, 2yo, 1m (off turf), 1:39.61, gd.
TIZNOBLE (c, 2, Tiznow–Tamboz, by Tapit) was sent off the 1-2 chalk in a rained-off optional tagger Monday at the Fair Grounds and endured by far the toughest trip, but managed to get the job done in a performance far better than it will look on paper. Drawn widest in a scratched down field of six, the homebred broke to his outside and with a somewhat erratic Spike's Shirl (Speightstown) to his inside, was consigned to a four- and five-path trip for the opening five panels. Asked to take closer order leaving the three-eighths pole, Tiznoble motored up to the leading trio and hit the lead just to the outside of Spike's Shirl–three and four wide the trip–at the head of the lane. Tiznoble wanted to lug in for the final eighth of a mile, but Brian Hernandez Jr. was able to keep him alive for a head success. The gray colt graduated at first asking over the Churchill turf Nov. 1, thrashing next-out maiden romper Cherry Wine (Paddy O'Prado) by 5 1/4 lengths and was exiting a respectable fifth, beaten 2 1/4 lengths from a high draw, in the Nov. 28 Pulpit S. on the turf at Gulfstream Park West. The winner, a half-brother to Oceanwave (Harlan's Holiday), MGSP, $245,449, is out of a full-sister to GI Breeders' Cup Dirt Mile winner Tapizar, who was acquired carrying this foal in utero for $440,000 at the 2012 Keeneland November sale. Tamboz's yearling from the final crop of Unbridled's Song fetched $700,000 from Crupi's New Castle Farm at this year's Keeneland September sale. The mare produced a colt by Into Mischief this past Mar. 26 and was bred back to Distorted Humor. Sales history: $32,000 RNA Ylg '14 KEESEP. Lifetime Record: 3-2-0-0, $57,847. Click for the Equibase.com chart or VIDEO, sponsored by Fasig-Tipton.
O/B-Dell Ridge Farm LLC (KY); T-Joe Sharp.